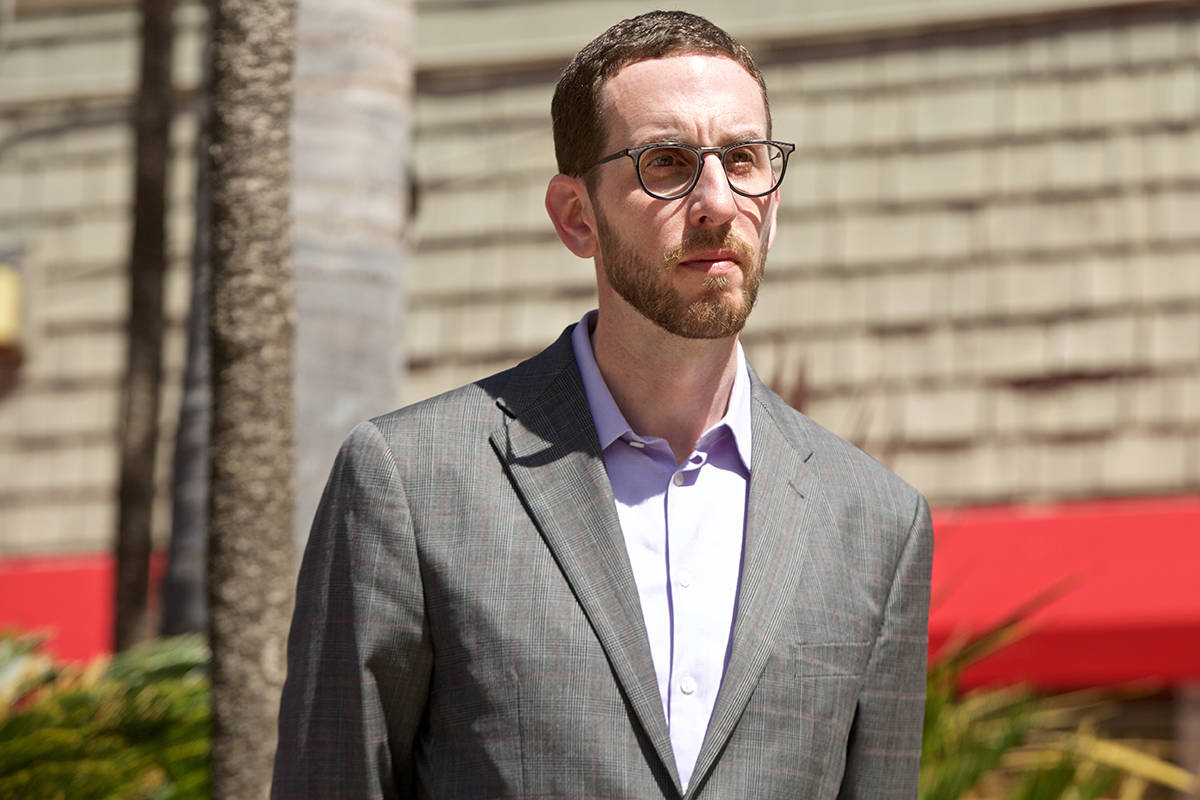 Governor Gavin Newsom of California signed into law a new bill that will allow biological males to be housed in female prisons simply by self-identifying as a woman. NBC News reports the new law states California inmates cannot be denied access to the gender-segregated prison of their choosing based on anatomy, sexual orientation, or any “factor present” among other inmates.

State Senator Scott Wiener — who authored the bill — mentioned though there is a provision in the bill that an inmate can be denied access to their preferred prison due to “management and security concerns,” he does not anticipate that it will be used very often.

Wiener, a Democrat representing California’s 11th Senate District, which includes San Francisco and parts of San Mateo County stated: “It’s just a false narrative about transgender people and about transgender women in particular that they’re somehow not really women and are just trying to scam their way into women’s bathrooms and facilities in order to do bad things.”

In the California state legislature, Wiener has made a name for himself for pushing radical, often shocking, legislation relating to LGBT people that catches national news headlines. This month, a bill he introduced that would exempt some pedophiles from mandatory sex-offender registration became law. Wiener also authored at 2017 law that dramatically reduced penalties for knowingly infecting a partner with HIV, from a felony to a misdemeanor.

Women’s rights, transgender issues, and access to sex-segregated spaces continue to be a controversial, hotly contested issue – particularly where access depends on self-identification and not medical history or evaluation from medical professionals. In 2016, four female prisoners sued the federal government over being forced to be housed with transgender inmates, claiming their constitutional rights were violated. Because of the lawsuit, the Bureau of Prisons then rescinded the Obama-era policy that forced female inmates in federal prison to be housed with biological males. The issue has since been left up to states and local municipalities.

Sexual predators come from all walks of life and the vast majority of transgender people, like the general population, are not a danger to anyone in restrooms, prisons, or other sex-segregated spaces. The primary issue, says some activists, is “self-identity.”

“One of the fundamental issues of the entire transgender ‘world’ and the LGBT mainstream is the idea of self identification,” says Gina Roberts, a transgender rights activist. “I am very much against that idea. If you are truly transgender, it’s not an easy path, nor should it be, and needs to be medically monitored. That provides the transgender individual and society a higher level of credibility and understanding.”

In the US, Canada, and the United Kingdom, there is serious discussion around integrating the sexes in correctional facilities, with critics pointing to several high-profile cases in recent years where perpetrators appeared to only self-identify as transgender.

In one case in the US, an inmate at Illinois’ largest female prison said she was raped by a transgender inmate in June of 2019, adding that Illinois Department of Corrections (IDOC) officials conducted a “sham investigation” in an effort to cover up the incident. The inmate noted she was coerced by a supervisory officer into denying the incident took place and was then unjustifiably punished for filing a “false” complaint under the Prison Rape Elimination Act (PREA).

According to the lawsuit, Janiah Monroe, a transgender inmate who “identifies as female, but still has male genitalia,” was transferred into the plaintiff’s housing unit on June 18, 2019, and reportedly began to “express an interest” in the plaintiff.

“Plaintiff was terrified of this inmate as the inmate was much bigger and stronger than Plaintiff,” the lawsuit stated. “Plaintiff had also heard that this inmate had assaulted prior cellmates and had been convicted of murder.”

It was two months later the woman learned that IDOC had decided that she committed a “major infraction” for reportedly filing a false PREA complaint. The complaint continued in laying out that the woman was punished during the following months while still incarcerated. As a result, the authorities said that the sex between the victim and Monroe was consensual. Alan Mills, who led the Uptown People’s Law Center, added that “transphobia exists everywhere, both out here and on the street and in prison, so it’s not surprising that there are some people who feel uncomfortable with her presence in a women’s prison.”

In mid-August of 2019, Heather Mason, a former Canadian federal prisoner and advocate for women in prison, shared a Facebook post about someone named “Sam” who was being charged with sexually assaulting a woman at the Grand Valley Institute for Women — a minimum security, residential-style apartment complex.

It was confirmed that “Sam” was Steve Mehlenbacher, who, according to a 2013 Canadian Press article was “serving his fourth federal sentence after a total of 16 bank-heist convictions.” Mehlenbacher was being held in Mountain Institution—a men’s prison in British Columbia. Mehlenbacher had reportedly escaped from halfway houses on a number of occasions and was allegedly classified as a dangerous offender by Toronto Police.

He was later moved to the Edmonton Institute for Women, and then moved to the Grand Valley Institute in 2019. A woman who went by “Mary” had managed to get in touch with Mason to share her experience with Mehlenbacher in the women’s inmate facility.

Mary continued: “He cornered me in the laundry room one day telling me how beautiful I was and he was trying to get with me. It was super weird. All the girls were uncomfortable showering in the house with him and everything. He tried to tell me he was in love with me. Ugh it was weird. He asked me to read for him and this girl and started making out with her and feeling her up while I was there.”

Mason noted one more example where Mehlenbacher bragged about his time spent in the Edmonton Institution for Women: “He bragged to us about how many girls he slept with there, and he also bragged about taking a girl’s virginity in the library. He gave explicit details as well as humped the air when explaining it. There were a few of us sitting there; it was in the living room during count. I couldn’t eat after that. That’s why he was moved to GVI—because they wanted to separate him from his girl there. It’s f***** up that Correctional Services Canada knew how he was and still put him in the main compound of GVI.”

The two women who claimed alleged abuse from Mehlenbacher said they were not surprised he had been charged with sexual assault. A gender-identity blog called Women Are Human reported that “they see this as an inevitable outcome of allowing transfers from men’s to women’s prisons—especially when the prisoner considers all women prisoners as conquests.”

Karen White, a “predatory and controlling” accused rapist, was reported to have been jailed for life in 2018 after the self-identified trans woman attacked a number of female prisoners in the United Kingdom. White admitted to sexually assaulting women in a female prison and raping another two women outside jail, according to The Guardian.

White previously had been described as a danger to women and children, ultimately being sentenced for two counts of rape, two sexual assaults, and a single offense of wounding. White also had been previously convicted for “indecent assault, indecent exposure and gross indecency involving children, animal cruelty, and dishonesty.”

The UK’s Ministry of Justice came out and apologized for moving White to the women’s prison, noting that previous offenses had been insufficiently taken into account before the decision was made. Prosecutor Chris Dunn had described White as an “alleged transgender female” who had leveraged her “transgender persona to put herself in contact with vulnerable persons” whom she could then abuse.

“The prosecution said that because there is smattering of evidence in this case that the defendant’s approach to transition has been less than committed,” he added.

After sentencing White to a minimum of eight-and-a-half years in prison Judge Christopher Batty stated: “You are a predator and highly manipulative and in my view you are a danger. You represent a significant risk of serious harm to children, to women and to the general public.”

The Guardian reported that in 1989, when Karen White was known by her birth name, Stephen Terence Wood, she was convicted of indecent exposure when she exposed herself near a children’s playground. It was just twelve years later that White would go on to indecently assault and commit gross indecency with two boys aged nine and 12. As a result, she was jailed for 18 months.

In 2003, White continued the criminal rampage by raping a pregnant woman—the alleged wife of a friend. While White was still operating under the name of Stephen Wood, she had offered to help decorate an apartment for a woman, who was two months pregnant. While Wood was there, he spiked her drink with vodka until she passed out and then proceeded to rape her, according to the court. The victim told the court in a statement that the attack had ruined her life since her husband did not believe her.

The victim said: “I have no relationships with anyone. I felt very dirty as a woman. I became very depressed. Even now 15 years on I still struggle with mental health and suffer horrendous flashbacks. Until 15 years ago I was a strong woman.”

Roberts and other activists believe the issue of self-identity not only has the potential to put others at risk of harm but has real-life negative effects on the transgender community and trans issues.

“The current legislation is deeply flawed, and it potentially places both transgender and cisgender inmates at risk,” Roberts says. “That before housing decisions should be made an evaluation of the prisoner needs to be made for the safety of everyone.  Then if they are physically transitioned or medically supervised as a non-risk, then such decisions should be made on appropriate housing.”