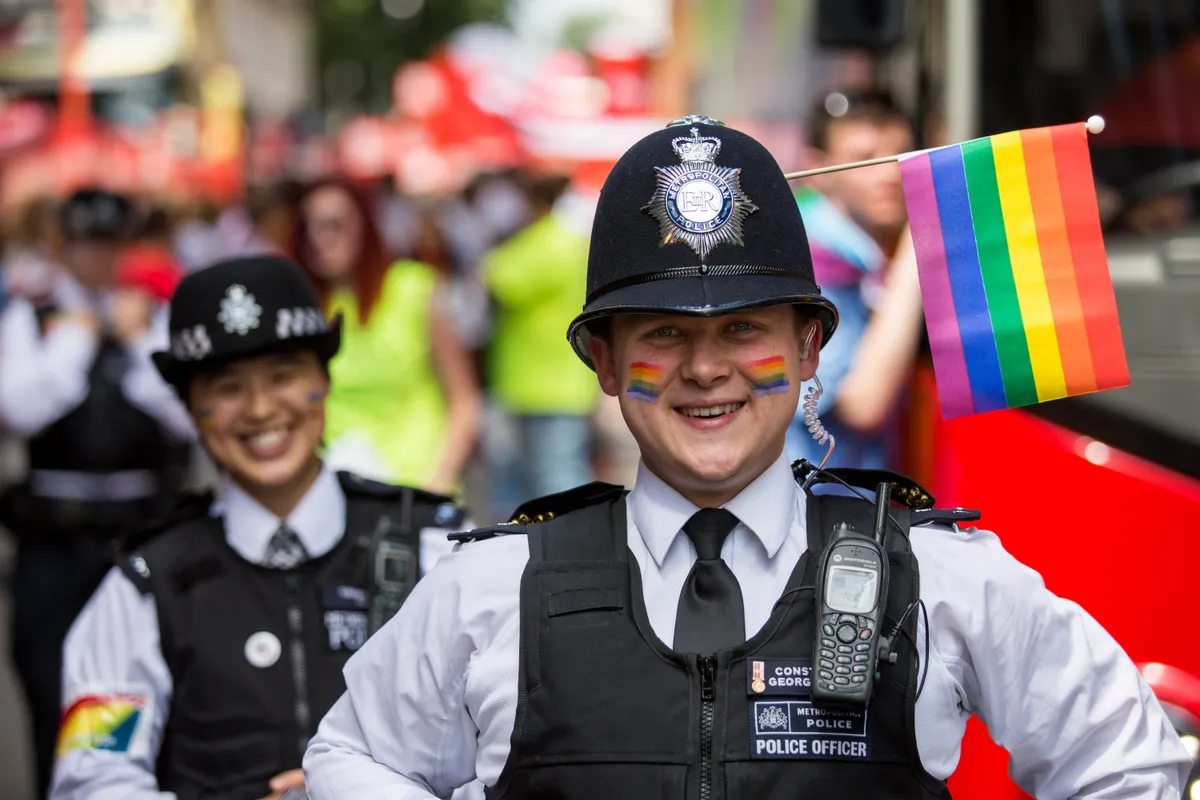 When British statesman Sir Robert Peele founded the Metropolitan Police Act in 1829, it was the basis of today’s law enforcement.

Back then, his vision was a coordinated approach to law and order.

For many years, it was effective and credible. In fact, it was so successful that it inspired America’s first publicly-funded, full-time police department, which was established in Boston in 1838.

However, if Peele — a former Prime Minister and one-time Chancellor of the Exchequer — saw the state of today’s modern policing, he’d likely be spinning in his grave at top speed. And who could blame him?

Not only do officers take the knee and allow people to loot stores with impunity, but they’ve also caved to woke ideology around gender.

The latest example comes from Norfolk, U.K., where the local constabulary recently published a guide of almost forty different gender identities to help officers deal with members of the public.

Obtained by the Mail on Sunday, the document lists 37 bizarre terms alongside an illustration of a ‘gender bread person,’ or a gingerbread man to everyone else.

Some of the terms are more self-explanatory than others, such as ‘pansexual’ and ‘bicurious’, but others are more obscure. These include ‘neutrois,’ which is a non-binary term for when someone ‘identifies as neither male nor female,’ and ‘grey asexual,’ which is a person who ‘experiences attraction rarely.’

Another lesser-known term is ‘varioriented,’ which describes ‘when a person’s sexual and romantic orientations do not target the same set of genders,’ then there’s ‘gender apathetic,’ which denotes a person who doesn’t care about identifying as either gender.

Naturally, many critics have called it a waste of taxpayers’ money. And I’m inclined to agree.

Not because I care how a person chooses to self-identify; I really don’t. They can self-perceive however they choose, even if it contradicts biological science and makes zero sense to other people. But I do care about the police wasting their time on anything other than fighting crime. After all, they’ve got one job to do, and I want them to do it properly, especially when they’re being funded by ordinary, hard-working citizens.

I am writing this article from New York City, where overall crime is up nearly 60% compared to this time last year. Crime is being led by felony assault, up 22%, and robbery, up 56%. Grand larceny jumped by 79% and auto theft more than doubled.

The swell in incidents isn’t restricted to certain areas, either. 72 out of the Big Apple’s 77 police precincts saw a rise in crime, according to the New York Post.

Across the pond, a similar pattern has also emerged in the U.K. In London, where I’m based, the situation is particularly bad. Knife crime is rampant across the capital and statistics for 2019 showed it to be the bloodiest year in over a decade.

Last summer, a young man was fatally shot at point-blank range outside my building. His blood stained the pavements for days afterward; a reminder of the literal bloodshed on our streets.

Further proof, in case you needed it, that society is still dangerous and requires efficient, optimal law enforcement by people with a laser-like, myopic focus. Something that can’t be achieved if they’re distracted with woke guff.

This ‘guff’ includes booklets on gender variants, which only pertain to a tiny subset of the population anyway. Seriously, why do officers need to know this? Aren’t we all supposed to be equal under the law? If that’s the case, then a person’s gender identity is completely irrelevant. A non-binary criminal shoplifting from Walgreens should be treated exactly the same as a ‘cis’ criminal shoplifting from Walgreens. That’s literally the equality we’ve all been striving for.

No preferential treatment, ever.

Of course, the police should always have a zero-tolerance approach to discrimination, both within its ranks and on the beat. But this already happens: officers are protected by employment law, while civilians are actively encouraged to report mistreatment to the Independent Office for Police Conduct (IOPC).

Together, this means there is no need or desire for extra-curricula ‘training’ in wokeness, especially as it doesn’t work anyway.

In 2020 it was announced that woke training on critical race theory, feminism, and trans ideology would be phased out of government departments after a review found that it was “not associated with changes in behavior.”

But, with crime rates in major cities on the rise, we need the College of Policing to do the same.

Granted, Norfolk isn’t London or New York, so their constabulary’s pre-occupation with gender isn’t a huge deal when viewed in isolation, but it represents a broader culture within the police force that’s truly worrying.

Especially for those who pay for it–sometimes with their lives.

The ‘Q’ is taking us backwards