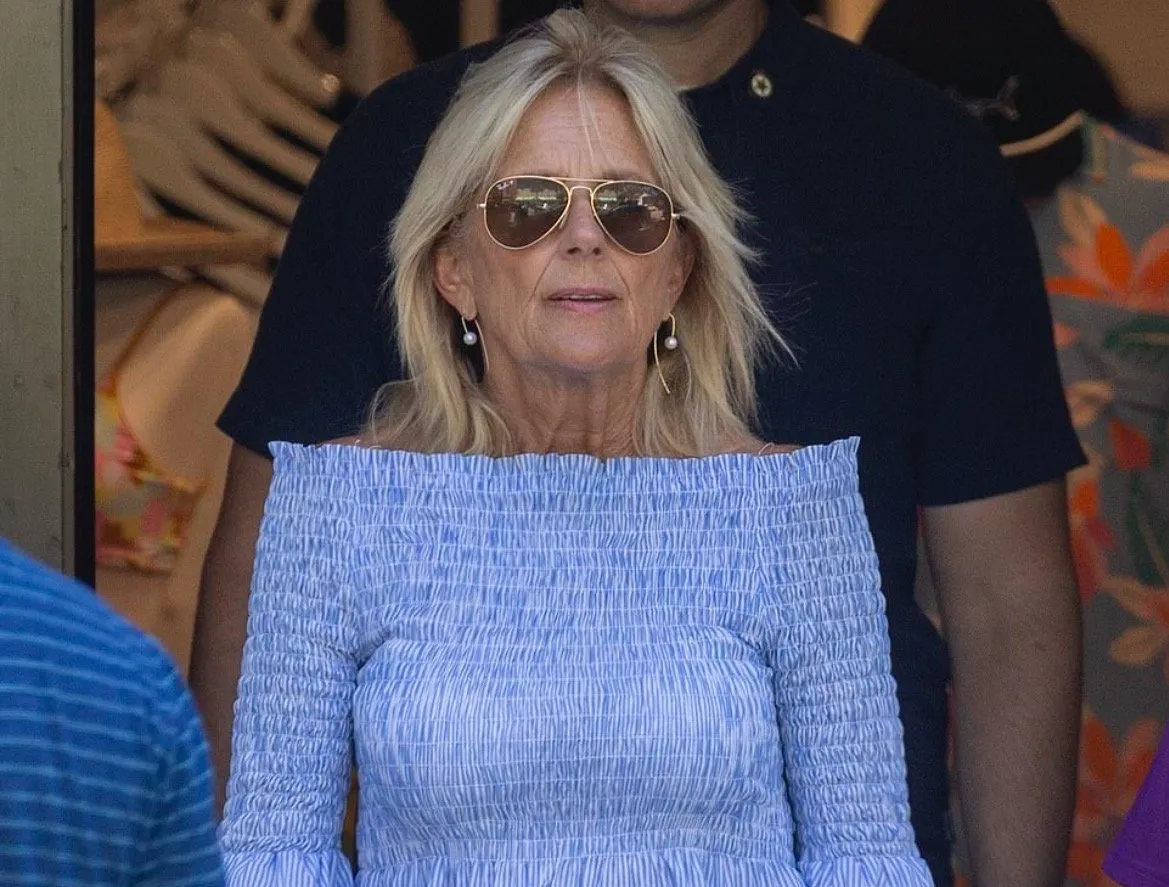 These are the words we associate with America’s First Ladies.

From Martha Washington and Abigail Adams to Barbara Bush and Melania Trump, the White House has always been enhanced with chic, colorful styles.

In the 1960s, Jackie Onassis became an international fashion icon for her love of European designers Chanel and Givenchy, which she famously pimped with oversized sunglasses and pillbox hats.

After that, Betty Ford’s tailored chic saw her wear wide-leg trousers with beautiful blazers, walking a tasteful life through the mid-seventies.

Together, these women—along with their many peers—injected some much-needed glamor into global politics.

Unfortunately, the one exception to this rule is the incumbent First Lady, Jill Biden. From foul fishnets to floral fails, no other White Housewife has got it so spectacularly wrong on a consistent basis.

To prove it, here’s a year in review of her biggest wardrobe gaffes throughout 2022.

Back in February, Dr Jill attended an official White House event for Black History Month—which is ironic given the Democrat Party defended slavery, started the Civil War, founded the Ku Klux Klan, and fought against the Civil Rights Acts of the 1950s and 1960s. But I digress.

Stepping out in Washington, she wore a monochrome polka dot dress from Brandon Maxwell, which she matched with a pair of red pumps. Worn individually, these items might’ve worked, but together it gave us a Cruella Deville-meets-Karen vibe, which is never a good look.

Keen to signal her virtue, she even capped her outfit with a mask embroidered with a sunflower in solidarity with Ukrainians. Yes, really.

Just a few weeks later, Dr Jill continued her virtue-signaling when she then wore a sunflower-embroidered dress for the State of the Union address on March 1.

The purple gown, which was taken from Lapointe’s pre-fall 2022 collection, also featured bizarre detailing on the arms, which gave the impression she’d caught it on barbed wire while fleeing questions about her husband’s connections with China.

The color choice was supposed to symbolize unity (a blend of Republican red and Democratic blue) but we suspect it was a nod to Barney the Dinosaur, who Joe Biden has clearly based his Presidential performance on.

There’s one golden rule about being First Lady: never do sexy. Sadly, Dr Jill couldn’t help herself while flying Air Force One in April.

Stepping off the famous jet, she raised eyebrows in a velvet blazer, a leather-trimmed dress and fishnet stockings, which she matched with suede ankle boots.

True, Dr Jill is very attractive and has a fabulous figure, especially for someone her age, but just because she can pull it off doesn’t mean she necessarily should.

More distasteful than the contents of Hunter Biden’s laptop, this outfit was simply age-inappropriate for the 71-year-old and too thirsty for a First Lady.

Back in May, Mrs Biden welcomed Team USA to the White House, celebrating American participation in the Tokyo 2020 Summer Games and Beijing 2022 Winter Games.

The result was a little contrived, although we appreciate she meant well.

That said, perhaps in the future she should be tried for doping alongside Russian athletes, because her outfit choices are clearly wack.

OK, we’re pretty big on sustainable living here at Outspoken, but there was zero need for Jill to revive her grandmother’s sofa covers from the 1960s.

This hideous maxi-dress was so grim it went viral, garnering some well-deserved criticism from everyone across the political spectrum, including some woke lefties. 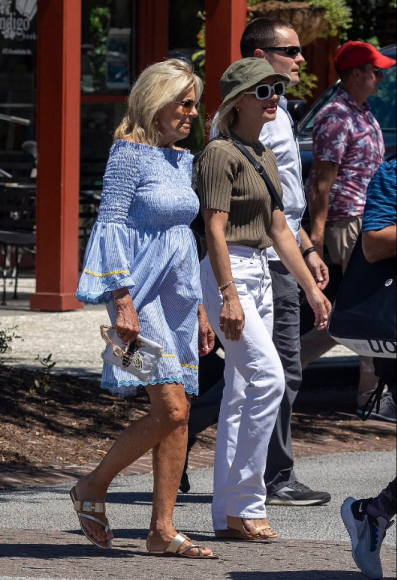 Dressing well for summer is tricky for the best of us. And, clearly, JB is no different.

Cut above the knee, it also featured flared wizard sleeves (not a euphemism) and a yellow ric-rac trim, suggesting either she made it herself or lost a bet.

We hope it was the latter, because then at least she wore it ironically. But, sadly, we have serious doubts.

It’s a good job this sequinned dress screams D-I-S-C-O because it was worn for a White House concert featuring Elton John.

Unfortunately, the shimmering number did nothing for her cleavage, which seemed to take inspiration from J. R. R. Tolkien and settle somewhere around Middle Earth.

Her taut tummy was also done a disservice by this fashion fail, so we sincerely hope it has since been donated to a local drag queen. Or Elton.

Here’s Dr Jill and her bumbling husband at Lancaster House in London, where they’re signing a book of condolence following the death of Queen Elizabeth II in September.

We understand she was in mourning, but can’t help being reminded of Krystle Carrington from 80s TV series Dynasty. In fact, we think Dr Jill resembles actress Linda Evans, who brought the camp character to life.

Some might conclude that makes Biden her John Forsythe, but the latter has far more charisma —which is impressive considering he died in 2010.

…AND SOME THROWBACKS FROM PREVIOUS YEARS 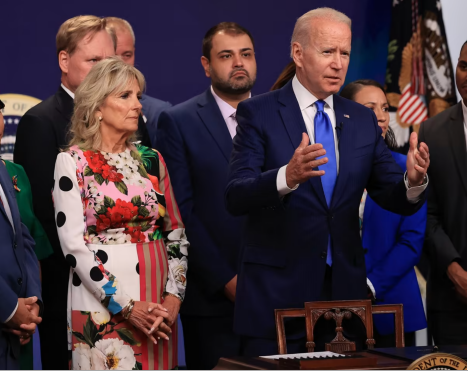 Back in June 2021, President Biden signed a bill designating the National Pulse Memorial in Orlando to all the victims of the 2016 mass shooting.

We wholly support this gesture, OBVS, and were pleased to see the slain honored.

But we draw the line at this $2,600 dress from Dolce & Gabbana, which looks like Dr Jill was in a collision with a clown car and a 1-800-FLOWERS delivery truck.

Back in May 2016, a stoney-faced Michelle Obama joined Jill for a special episode of talent show The Voice.

Ironically, neither woman displayed any innate talent for style, because both looked unremarkable in their choice of outfits.

Even more of a reason to welcome Melania back to Washington, D.C. in 2024.