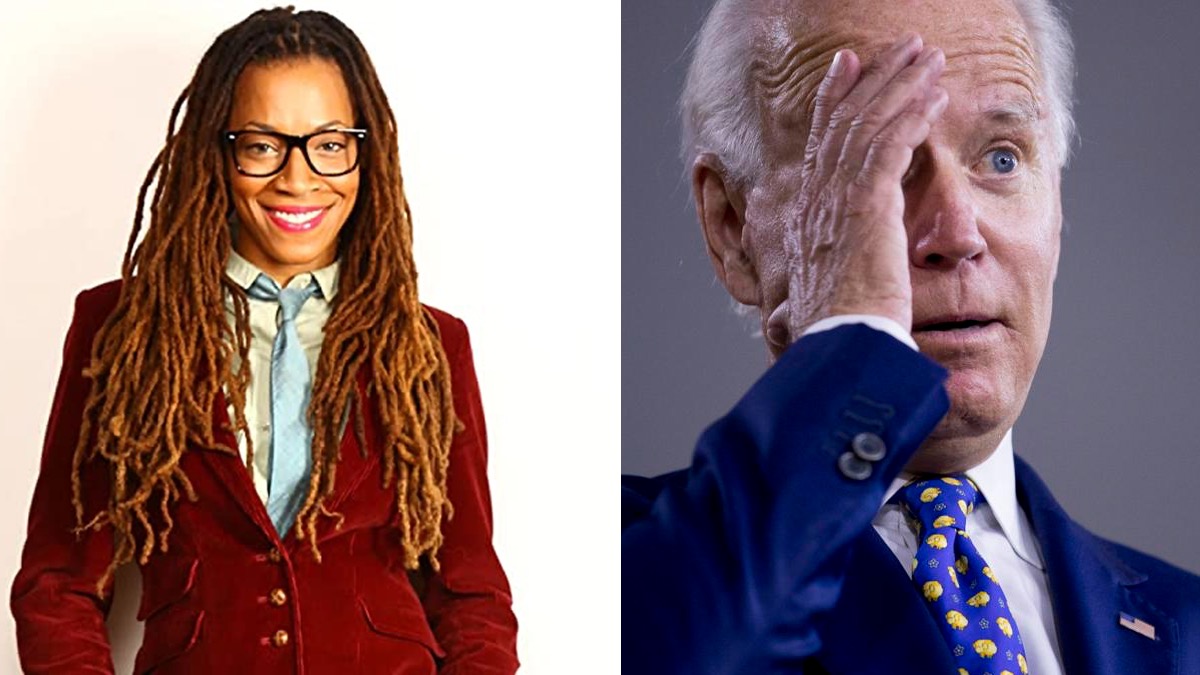 After a reaction video to a speech by Joe Biden went viral, Tik Tok influencer Megan McGlover has now been banned from the platform for “bullying.”

This was not the first time McGlover has gone viral, but it is the first time she has been censored. In her latest viral video, McGlover reacts to Joe Biden telling unvaccinated Americans that his “patience is wearing thin.” That one phrase sent many people on social media into a tailspin, including McGlover.

“Who the f–k you talking to?” she asks in the viral video, comparing the president’s condescending tone to one used when scolding a child, or perhaps one used by a domineering lover. McGlover then uses Biden’s phrase against him to imitate a pimp interacting with a prostitute. “‘My patience is wearing thin. I need you to get out on that boulevard and bring me my money.’ You ain’t my pimp, [expletive]! What the hell is wrong with these people?” she exclaims in the offending video.

McGlover, a black lesbian with a PhD is psychology, has her own practice offering therapy to clients and has written a book titled Stop Lying. McGlover was raised in Orange County, Calif., but now resides in Chicago. In 2011, her mother, Wanda McGlover, was tragically murdered while on the phone with her. The case went cold. McGlover wrote to then-president Obama as well as then-attorney general of California Kamala Harris pleading for answers, but she was ignored.

McGlover says she used the tragedy to impassion her to fight for the things that were important to her, as a sort of legacy to her mother who she says would have done the same. “I cannot allow the legacy of such a wonderful, incredible woman—Wanda McGlover—to just shrivel off and die,” she said during an interview on Newsmax.

Over the years, McGlover has amassed thousands of followers posting live videos on Instagram discussing various current events as well as self-help. She has labeled herself a type of conservative “auntie” for her followers.

During one such video, McGlover compared the modern political left to a plantation and explained that in history many of the house slaves tried to placate the field slaves into not wanting freedom because they led cushy lives in the master’s house. She compared today’s black celebrities and media mouthpieces to the house slaves trying to keep the rest of the black Americans enslaved to the political left.

“So you have Joy Reid, Don Lemon, D.L. Hughley, Roland Martin, the list goes on and on. They’re all in the house, and they simply tell you whatever their master tells them to tell you,” she said. She then continued by addressing her audience directly, “But you have to know the difference. You have to know better.”

Now that she has been censored, McGlover’s passion has been directed even more into politics and government. She has spoken out strongly about the censoring of Americans in America saying she knows it happens in other countries, but Americans are supposed to have freedom of speech.

McGlover has now stated that she is going to go into politics. She claims it is something she has thought about before, but with her censoring, she is now committed to taking a stand sooner rather than later. “It looks like I’m going to have to get into politics because they done took down my Tik Tok page. So with millions of views, they done took down my Tik Tok page, talking about I was bullying—Bullying who? Bullying Biden? You have got to be kidding me!” she said in a video announcement on Twitter. McGlover says she is now consulting with lawyers and accountants to find out when it is feasible that she might run for political office.