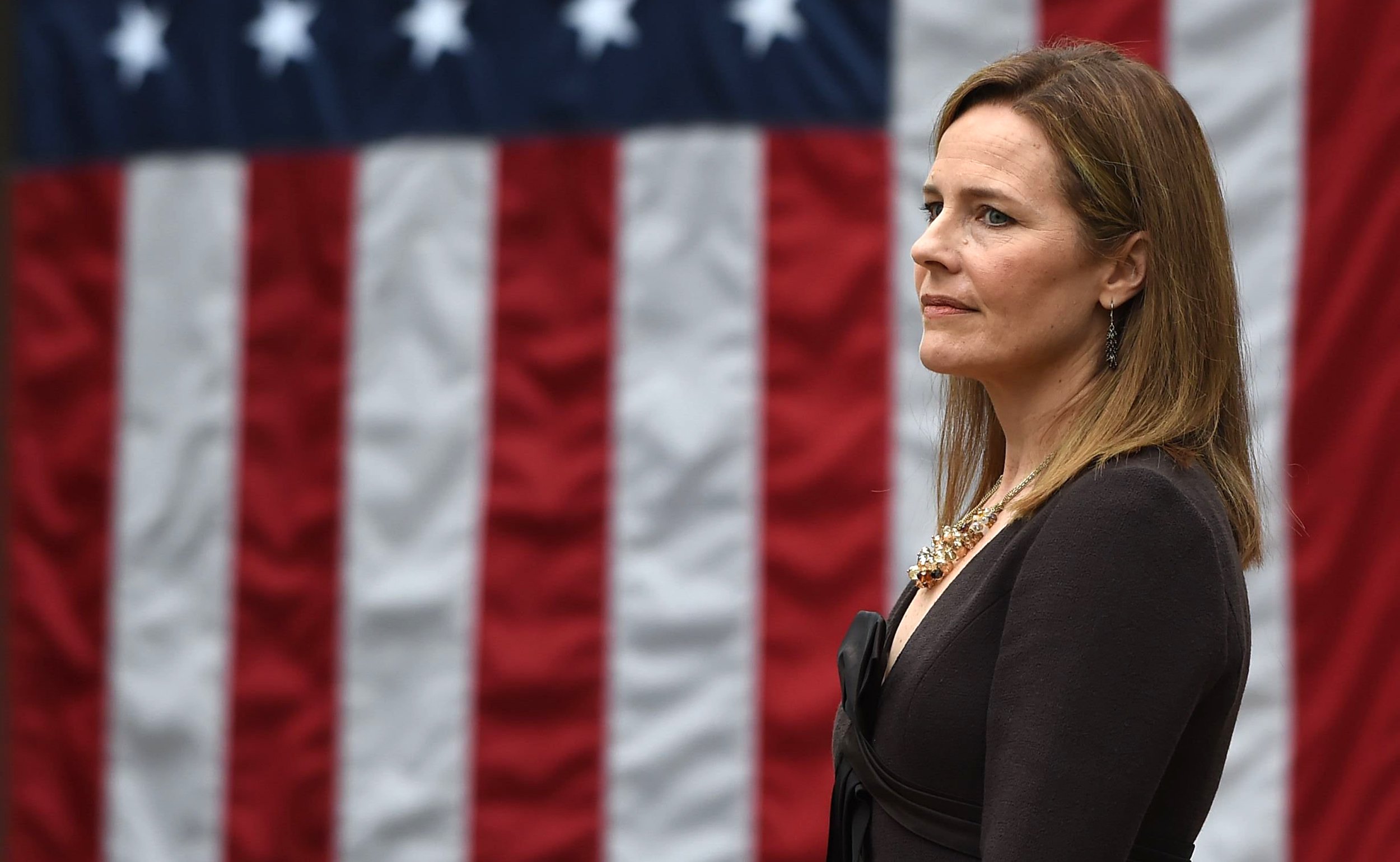 Trump announced Saturday his nomination of Judge Amy Coney Barrett, a federal appellate judge and Notre Dame law professor, to fill the vacant Supreme Court seat occupied by the late Justice Ruth Bader Ginsburg. Coney Barrett, age 48 and a mother of seven children, was a former law clerk to the late Justice Antonin Scalia and a finalist for the Supreme Court spot that went to Brett Kavanaugh in 2018.

The Senate Judiciary Committee will begin confirmation hearings on Barrett’s nomination on October 12. Left-wing media and gay lobbying organizations such as the Human Rights Campaign (HRC) have begun to stoke fears over Coney Barrett’s nomination, particularly where gay rights are concerned.

“Meanwhile, Mitch McConnell has sycophantically installed Trump’s extreme judicial nominees and is now seeking to push the balance of the Supreme Court even further to the fringes,” HRC wrote on its website in a statement condemning Barrett’s nomination.

It remains unclear whether HRC’s accusation refers to Trump-appointed judges such as Neil Gorsuch–who wrote the majority opinion in Bostock v. Clayton County, which made workplace discrimination based on sexual orientation and gender identity illegal–or openly gay Trump-appointed judges Patrick Bumatay of the Ninth Circuit Court of Appeals and Mary Rowland of the District Court for the Northern District of Illinois.

“If she is nominated and confirmed, Coney Barrett would work to dismantle all that Ruth Bader Ginsburg fought for during her extraordinary career. An appointment of this magnitude must be made by the president inaugurated in January. The Human Rights Campaign fervently opposes Coney Barrett’s nomination, and this sham process,” HRC’s statement concludes.

Yet Coney Barrett’s judicial record and writings paint the opposite picture, and instead reveal a jurist with an overwhelming respect for stare decisis, also known as precedent or “settled law.” Coney Barrett’s stated judicial philosophy is based on the conviction that judges should not let their personal political, ideological, or religious beliefs affect their decisions.

A practicing Roman Catholic, her personal beliefs are reflected on some issues. But, as argued by President John F. Kennedy and recently Democrat presidential nominee Joe Biden, one’s Catholic faith and personal religious views do not determine one’s positions on issues.

On issues of gay rights, there are two main points where the HRC and other left-wing LGBT organizations have zeroed in as they prepare to rally against Coney Barrett: anti-discrimination laws and same-sex marriage.

Here are the facts:

On Bostock v. Clayton County, defining that the Civil Rights Act of 1964 protections include sexual orientation or gender identity

Regarding the issues raised recently in Bostock v. Clayton County, Coney Barrett took the position that the word “sex” in existing anti-discrimination laws meant “sex” as in whether a person is a man or a woman. That is a reasonable position, and has been the same position of LGBT rights groups for over 45 years. Those groups have fought to change the law because they, like Barrett, recognized the word “sex” did not necessarily mean one’s sexual orientation. Coney Barrett did not say, nor has she ever, that she opposed laws protecting LGBT people from workplace discrimination. Instead, her point was that of any good judge: as the law is written, sexual orientation is not included. Arguing that the law says something is not the same as wishing it so.

The law is now different. Under Bostock and the companion case Harris Funeral Homes v. Equal Employment Opportunity Commission the term “sex [discrimination]” as written into existing law, particularly the 1964 Civil Right Acts, does now include sexual orientation and gender identity. The decision was 6-3 with the majority opinion written by Neil Gorsuch, a Trump appointee, which, combined with the Court’s reluctance to overturn itself, means that the decision is secure for the foreseeable future.

Coney Barrett sided with the minority on Obergefell, the 2015 Supreme Court case that legalized gay marriage in the US. She took the position as a Catholic that, with regard to her religion, same-sex marriage is not allowed. That is the position of many religious denominations, and her faith is utterly irrelevant to this discussion. HRC’s position appears to be no one may be a judge if he or she is a member of a religion that does not allow same-sex marriages.

President Trump’s position is that Obergefell is settled law, as he declared directly in his first interview as President-Elect speaking to 60 Minutes’ Lesley Stahl.

Stare decisis is the principle that courts give great weight to precedent. In no situation is that more important than in the matter of marriage equality, because overturning Obergefell would invalidate many marriages and the families on which they are based. For that reason, Obergefell, as much as any decision in the Court’s history, should be considered settled law.

In her writings, Coney Barrett has referred to “superprecedents” that are simply too much of a foundation for our society to overturn. If anything met that criterion, it would be Obergefell. Gay marriage is overwhelmingly supported in American society. Overturning Obergefell would create utter chaos and personal hardship and, as Walter Olson wrote for the CATO Institute, “gay marriage isn’t going anywhere,” even in a conservative Court.

In attacking Coney Barrett, HRC stated: “Barrett confirmed in 2017 she took a speaking fee from Alliance Defending Freedom, a legal group that has argued against LGBTQ rights and brought the Masterpiece Cakeshop case before the U.S. Supreme Court.”

Speaking to a group does not mean endorsing the view of that group. This was dealt with extensively during Coney Barrett’s previous confirmation hearings, notably in a confrontation with then-Sen. Al Franken (D-Minn.).

While Southern Poverty Law Center’s (SPLC) recent designation of ADF as a hate group might be disturbing, it is not one to be taken seriously. In recent years, it has become notorious for labeling organizations and individuals as purveyors of “extremism” or “hate,” sometimes merely for taking positions that SPLC disagrees with. Some of these are people whose traditional social or religious conservative positions on LGBT issues also were held, not long ago, by many or most political leaders, including Joe Biden, Hillary Clinton, and Barack Obama.

As noted by the watchdog group the Capital Research Center on its website Influence Watch, SPLC has cited as “anti-Muslim extremists” Maajid Nawaz, a British Muslim who defected from Islamist extremism to become a Liberal Democratic Party politician and advocate for reform within Islam, and Somali-born former Muslim Ayaan Hirsi Ali, an author and former member of the Dutch parliament for the liberal People’s Party for Freedom and Democracy (VVD) who stridently opposes Islamism and the practice of female genital mutilation. In 2014, it listed libertarian U.S. Senator Rand Paul (R-Kentucky) and Ben Carson, a renowned black surgeon who would later serve as Secretary of Housing and Urban Development, among neo-Nazis and white supremacists on its extremist lists.

Coney Barrett said: “People will feel passionately on either side about whether physiological males who identify as females should be permitted in bathrooms, especially where there are young girls present.” That term, “physiological males,” is not an offensive term. Her statement about people’s reaction regarding bathrooms and other sex-segregated spaces was simply a statement of fact regarding people’s reactions to the issue.

Church depicts Jesus as ‘genderqueer’ with breasts and beard