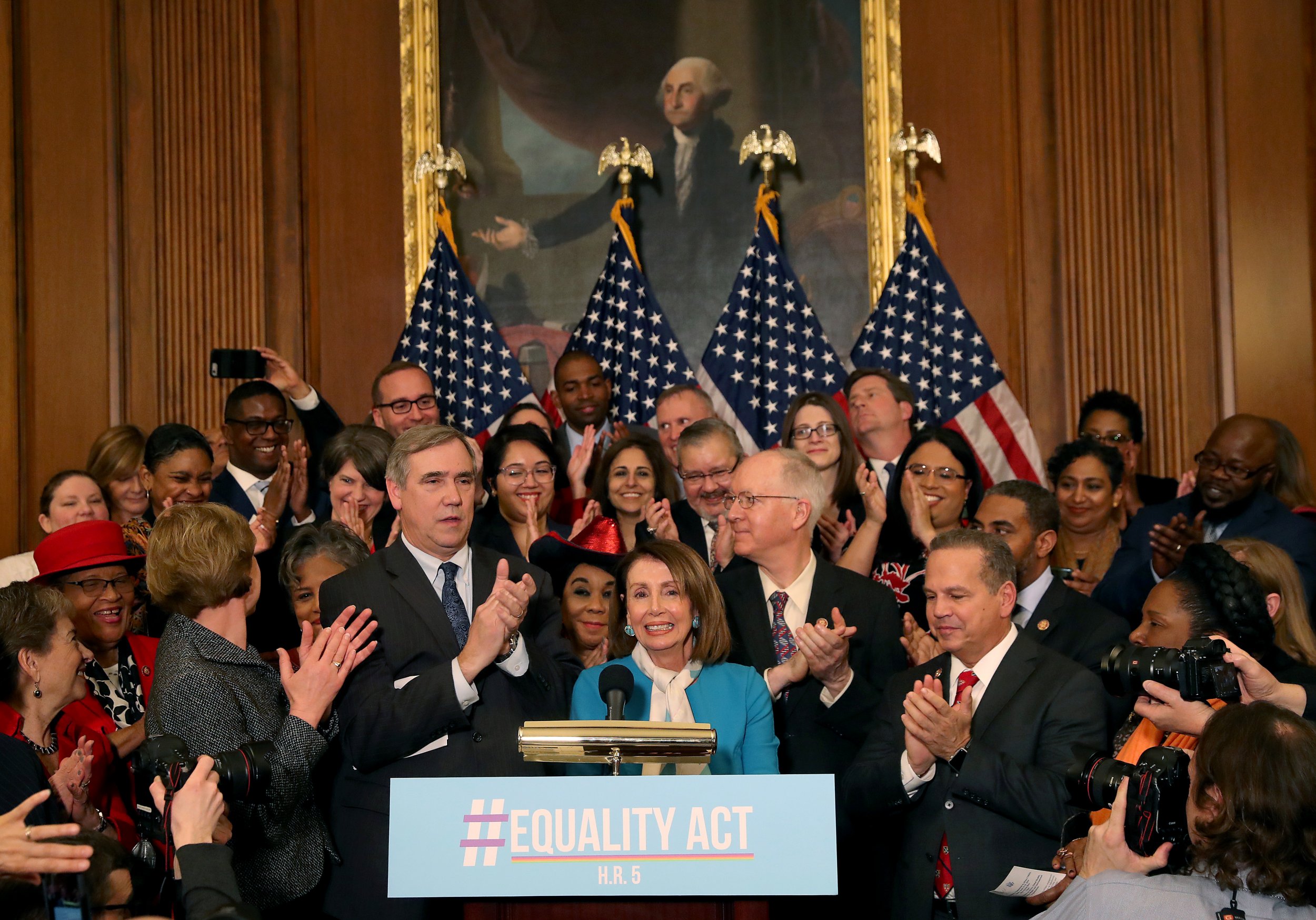 Despite being falsely presented in the media as an LGBT anti-discrimination bill, H.R. 5, known as the Equality Act, has widespread support among congressional Democrats and LGBT-themed lobbying organizations. Yet the legislation is a far cry from the 1964 Civil Rights Act it purports to expand and, instead, enforces a radical shift leftward from contemporary, mainstream American values.

Because of that case, no further legislation is needed. The Equality Act only seeks to cement another layer of bureaucracy and, some would say, mind control, with devastating effects on everyday Americans.

Across the country, teachers, parents, doctors, women’s rights activists, religious institutions, and LGBTs are raising the alarm against this dangerous and highly controversial bill.

The Equality Act is about abortion.

While endangering women’s health, safety, and advancement in other areas, the Equality Act is fastidiously concerned with expanding the abortion industry.

As Kenneth Craycraft writes in First Things, “[The Equality Act] would also fulfill the abortion industry’s long-fought desire to establish abortion as ‘health care’ officially and legally by outlawing ‘pregnancy discrimination.’ It requires that access to ‘treatment’ for pregnancy must not be any different from access to any other kind of health care treatment for any other ‘physical condition.’ But this is all code language for implementation of a vigorous national policy of abortion on demand for any or no reason … the Equality Act would make opposing abortion access morally equivalent to opposing dialysis, chemotherapy, stitching a wound, or setting a fractured arm; if there is no morally serious argument to be made against setting fractures, neither can there be a morally serious argument against providing an abortion.”

According to Ryan Anderson in the New York Post, “The act treats any refusal to offer abortion as ‘pregnancy’ discrimination. Decades of conscience protections against abortion extremism at the federal, state and local levels would be undermined.”

Craycraft notes, “The Equality Act would also outlaw certain kinds of psychological or psychiatric treatment, including any treatment for gender dysphoria that does not conform chapter and verse to extreme gender-identity ideology. Gender ‘confirmation’ hormone therapy and mutilating surgery will also be protected ‘health care,’ under the same analysis as abortion above.”

In The New York Post, Ryan Anderson, president of the Ethics and Public Policy Center, explains, “Medical doctors, secular and religious, whose ­expert judgment is that sex-reassignment procedures are misguided would now run afoul of our civil-rights laws. If you perform a mastectomy in the case of breast cancer, you will have to perform one on the teenage girl identifying as a boy. All in the name of equality. And no one knows what is required under the act to avoid committing ‘discrimination’ in the case of ‘nonbinary’ gender identities.”

Taxpayer money and programs would be put behind all of this.

The Equality Act endangers children and will lead to increased suicidality.

As John Paul Moran writes in The Federalist, “[The Equality Act puts] gender-confused children at extreme risk, with no alternate paths for them allowed besides cross-sex hormones and genital amputation.”

According to the Heritage Foundation’s Emelie Kao, “Among children who struggle with gender dysphoria, 80% to 95% of those who are allowed to mature naturally through puberty tend to resolve their dysphoria.

“In contrast, those who undergo physical ‘transition’ interventions, such as puberty blockers and other irreversible surgeries, often do not see any lasting benefits with regards to mental health. In fact, many patients experience permanent damage to their cardiovascular health, bone density, and reproductive functions.”

Kao goes on to explain, “Contrary to the science, the Equality Act would make physical ‘transition’ interventions standard medical care for gender-dysphoric minors. Puberty blockers and cross-sex hormones could be offered at as young as nine years old. After receiving these, minors could then undergo irreversible ‘top’ or ‘bottom’ surgery.”

“As a result,” Kao writes, “evidence-based treatments that have been proven to help children reconcile with their bodies would disappear. Medical providers who administered those treatments would be forced to choose between their consciences or performing interventions that they consider to be ‘bad medicine.’ Parents will be left without therapeutic alternatives that do not cause irreversible harms to their children’s bodies.”

Text from the bill, “An individual shall not be denied access to a shared facility, including a restroom, a locker room and a dressing room, that is in accordance with the individual’s gender identity.”

Anderson in the Post writes, “Rather than finding common-sense, narrowly tailored ways to shield LGBT-identifying Americans from truly unjust discrimination, the bill would act as a sword — to persecute those who don’t embrace newfangled gender ideologies. . . If it ­becomes law, [men who identify as women] would have a right to spend the night in battered-women’s shelters, disrobe in women’s locker rooms and compete on women’s sports teams — even at K-12 schools.”

According to The Federalist‘s Margot Cleveland, “Under the law, any man or boy claiming a female gender identity could access store dressing rooms, recreational centers’ locker rooms, or school bathrooms.

Anderson writes, “So you can keep separate facilities for men and women, but you have to redefine what men and women are. Likewise, you can ­reserve certain jobs only for men or women — think TSA agents doing pat-downs — but you have to let a man who identifies as a woman do strip searches on women.”

Author Abigail Shrier noted on Twitter practices that would become legalized under the Equality Act, including: “A devout Muslim woman enters a U.S. airport, dressed in a burka. She’s randomly selected for a pat-down & requests a female. As long as a male TSA agent has announced he is a woman, he does the pat down.”

“The Equality Act defines ‘gender identity’ so broadly, a male athlete need only declare his identity as ‘female’ and he qualifies to compete ‘equally’ with girls,” Cleveland writes in The Federalist.

The Equality Act is federal overreach.

The Equality Act trumps all state laws, preventing states (or school boards) from addressing issues such as athletics or locker room and bathroom use on a local level.

“The act would also massively expand the government’s regulatory reach. The Civil Rights Act, it seems, is too narrow for today’s Democrats. The Equality Act would coerce ‘any establishment that provides a good, service, or program, including a store, shopping center, online retailer or service provider, salon, bank, gas station, food bank, service or care center, shelter, travel agency or funeral parlor, or establishment that provides health care, accounting or legal services,’ along with any organization that receives any federal funding. That’s more or less everyone and everything,” writes Anderson in the Post.

Craycraft writes in First Things, “While even the Obama-era Affordable Care Act contained conscience or refusal provisions for religious believers (albeit largely inadequate ones), the Equality Act expressly denies such exceptions. It explicitly provides that the ‘Religious Freedom Restoration Act shall not provide a claim concerning, or a defense to a claim under’ the Act, nor ‘provide a basis for challenging the application or enforcement’ of the Act.”

Anderson writers, “Outrageously, the Equality Act explicitly exempts itself from the Religious Freedom Restoration Act. Pope Francis would be treated as the legal equivalent of a Jim Crow segregationist.”

Moran notes in The Federalist the Equality Act, “Elevate[s] LBGTQ rights and claims over religious citizens by mandating that an LGBTQ person’s claim wins by default in cases where there is a dispute between the two.”

“By expanding the definition of ‘public accommodations’ under Title II of the Civil Rights Act to include health care establishments, as well as changing federal assistance requirements under Title VI of that law, the Equality Act would make counselors and medical professionals who do not ‘affirm’ self-professed gender identity liable to discrimination claims,” writes Kao for the Heritage Foundation.

Moran writes, “This bill would require Americans to consider gender identity and even biological sex a personal choice, not an objective fact. This is where this bill completely falls off the rails. This will turn any recognition of the difference between biological sexes, or any preference for traditional sexual relationships or genders, or even the scientific definition of the two sexes, into potential ‘hate’ crimes.”

“Gay, lesbian, and bisexual members of society would also effectively become an ‘extinct species’ under this bill. That’s because it would enshrine the gender identity agenda that is counter to gay rights. For decades, we gays preached to the world that we were ‘born this way,’ and that being gay, lesbian, or bisexual ‘is not a choice,'” Moran writes.

“We did not challenge nature or the science of our biology, nor millennia of human history’s distinctions and separations of the two sexes. Now, that’s turned on its head. For the gender-identity and trans-obsessed crowd, how you were born can now be ‘changed,’ and everything regarding sex and gender is simply a ‘choice.’

“If being gay means being a man who has same-sex attraction to another man, the Equality Act would make this definition completely defunct. What is now a ‘man’? Whoever claims to be,” he says.