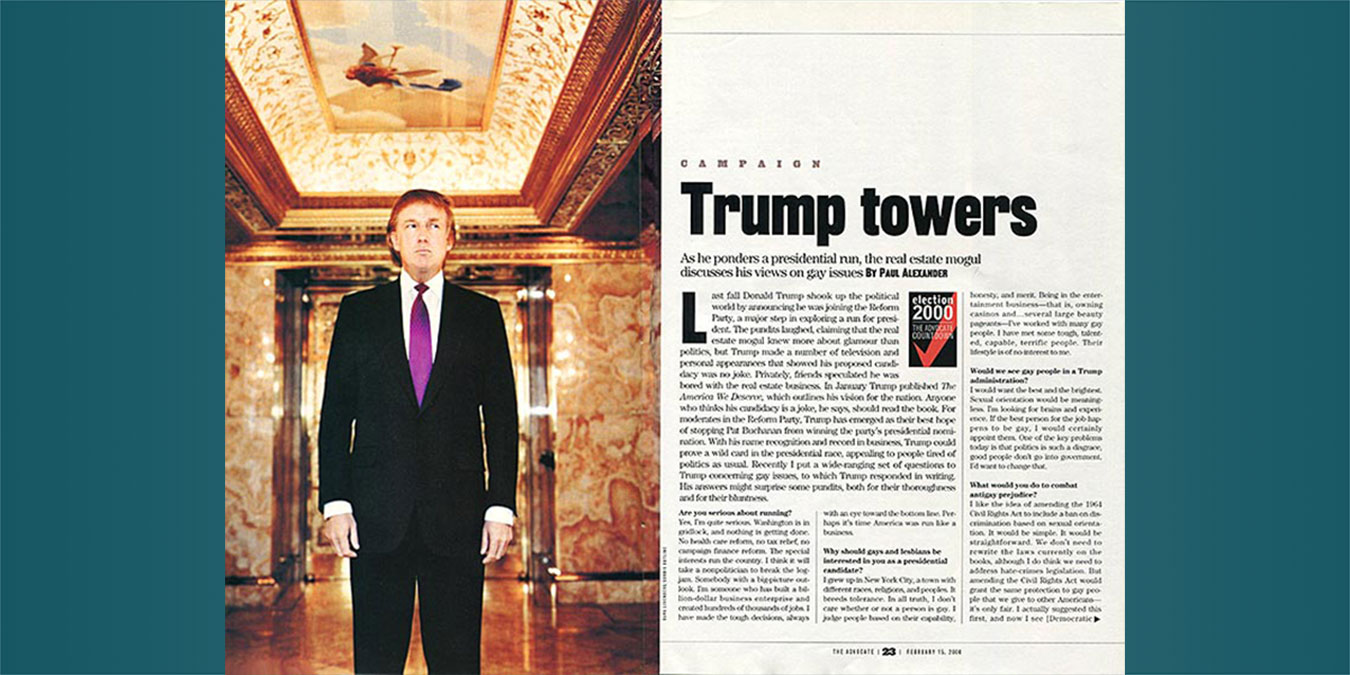 In 2000, the Advocate magazine sat down with Donald Trump to discuss the real estate mogul’s views on gay rights and the state of American politics. At the time, Trump was considering a run for president under the Reform Party ticket where he would have posed a challenge to then-favorite Pat Buchanan.

“With his name recognition and record in business, Trump could prove a wild card in the presidential race, appealing to people tired of politics as usual,” interviewer Paul Alexander wrote in Advocate‘s February 15, 2000 edition, where Trump received a full spread in the magazine. “Recently I put a wide-ranging set of questions to Trump concerning gay issues, to which Trump responded in writing. His answers might surprise some pundits, both for their thoroughness and for their bluntness.”

In September 2015, three months after Donald Trump launched his campaign for the Republican nomination for president, the Advocate, once the world’s leading LGBT political magazine, republished the interview adding a new headline intended to smear the candidate they once treated glowingly. “When he ran for president 15 years ago, the real estate mogul sang a different tune when it came to minorities,” the re-print read, without bothering to substantiate the new claim.

In fact, all evidence shows the president has not changed his opinion on gay rights save for one area: gay marriage. In 2000, when full marriage largely was seen as a fringe cause, Trump said in the interview he favors, “a very strong domestic-partnership law that guarantees gay people the same legal protections and rights as married people. I think it’s important for gay couples who are committed to each other to not be hassled when it comes to inheritance, insurance benefits, and other simple everyday rights.” The president since then has fully endorsed marriage equality and is the only president in history to assume office in support of gay marriage, telling 60 Minutes that the issue is “settled” and he’s “fine with it.”

Trump also came out in support of allowing gays to serve openly in the military and ending “Don’t Ask Don’t Tell.” Critics have falsely claimed the president has backtracked on that with a supposed ban on transgender individuals serving in the military. That executive order, however, does not ban transgender Americans from serving, only those currently undergoing medical intervention for gender dysphoria, which is in line with most existing military policy on any personnel undergoing prolonged medical treatment.

Here are some excerpts from the Advocate interview:

Advocate: Why should gays and lesbians be interested in you as a presidential candidate?
Donald Trump: I grew up in New York City, a town with different races, religions, and peoples. It breeds tolerance. In all truth, I don’t care whether or not a person is gay. I judge people based on their capability, honesty, and merit. Being in the entertainment business — that is, owning casinos and … several large beauty pageants — I’ve worked with many gay people. I have met some tough, talented, capable, terrific people. Their lifestyle is of no interest to me.

Advocate: What would you do to combat antigay prejudice?
Donald Trump: I like the idea of amending the 1964 Civil Rights Act to include a ban of discrimination based on sexual orientation. It would be simple. It would be straightforward. We don’t need to rewrite the laws currently on the books, although I do think we need to address hate-crimes legislation. But amending the Civil Rights Act would grant the same protection to gay people that we give to other Americans — it’s only fair. I actually suggested this first, and now I see [Democratic presidential candidate] Bill Bradley has jumped on the bandwagon and is claiming the idea as his own.

Advocate: Are your gay employees allowed to be out?
Donald Trump: Everyone makes a personal choice. Look, it just doesn’t matter to me. I try to treat everybody equal and fairly. Maybe that’s why I can count men like Muhammad Ali, Joe Frazier, and Sammy Sosa as my friends. When you hang with people who are different from you, you get an appreciation for other cultures.

Advocate: Do you think gay people should be allowed to serve in the military?
Donald Trump: Yes, if a gay person can be a doctor or a lawyer or a teacher or take another position of responsibility, why can’t they serve this country in the military? “Don’t ask, don’t tell” has clearly failed. Gay people serve effectively in the military in a number of European countries. There is no reason why they can’t serve in the United States. Frankly, the state of our military is a wreck. Military pay is a joke, military benefits are ridiculous, and we can’t attract the kind of quality people we need to have an effective fighting force. The Pentagon is wasting millions on weapons they don’t need instead of focusing on the military needs in the changing world situation. The truth is, our nation defense is in the weakest state since Pearl Harbor. I favor a total reorganization of all branches of our military, and I would address the gay question more forthrightly within that reorganization.

Advocate: How did you feel when you heard about the Shepard murder?
Donald Trump: It turned my stomach. I have a son who is about the same age as Matthew Shepard and is a student at Wharton. The idea somebody would beat a young man to death just because he is different is almost hard to fathom. I hope that the boy’s death is not in vain and that the public revulsion about this case can be harnessed in a way that prevents this kind of hideous crime from happening again.

Advocate: What are your thoughts on gay marriage?
Donald Trump: I think the institution of marriage should be between a man and a woman. I do favor a very strong domestic-partnership law that guarantees gay people the same legal protections and rights as married people. I think it’s important for gay couples who are committed to each other to not be hassled when it comes to inheritance, insurance benefits, and other simple everyday rights.