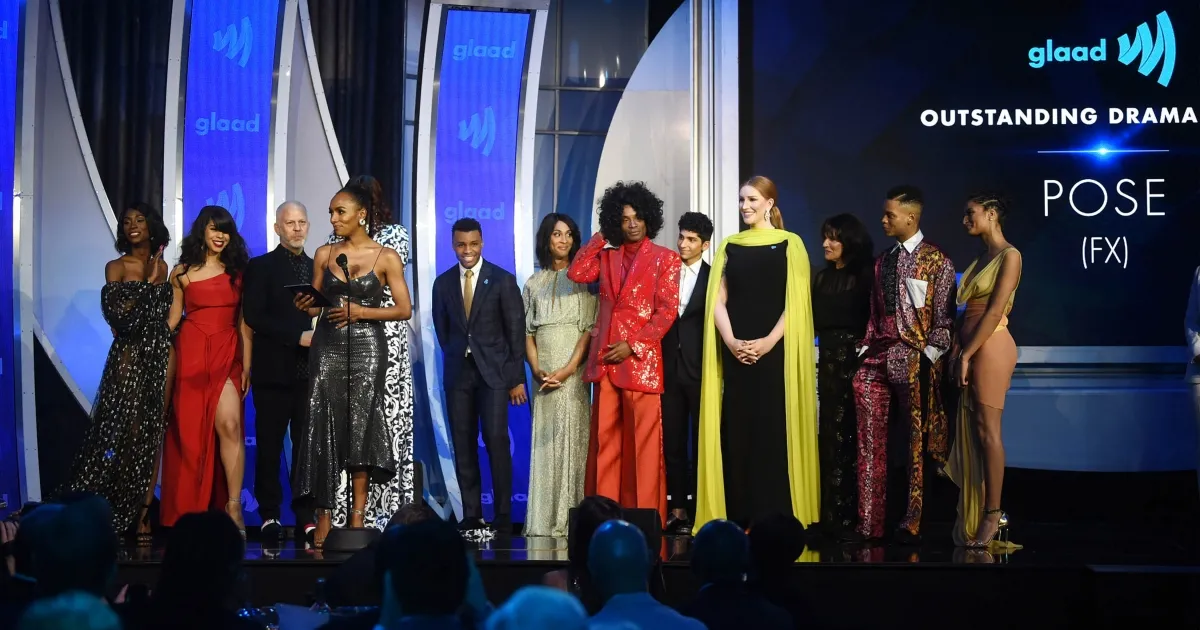 On Friday, GLAAD hosted its 33rd annual Excellence in Media awards in New York City and now that the Covid theatre and Dr. Fauci have been packed away–likely to resurface at the time of November’s midterm elections–the event with thousands of unmasked people went on as normal. As expected, politics were front and center.

Many speakers at the star-studded affair, sponsored by companies like drugmaker Gilead and Kettle One Vodka, harped on the possibility of Roe v. Wade being overturned marking the end to a constitutionally-recognized right to abortion. They then stoked the baseless fear that marriage equality would be the next on the docket to be overturned.

Actor Wilson Cruz, best known for his role in the 90s teen drama My So-Called Life, was one such voice. On the red carpet, Cruz told The Hollywood Reporter, “We need to get to the polls and protect our kids, and we need to save abortion access for everybody, and by doing that, we will save marriage equality and interracial marriage, like the fact that we’re even talking about that is absurd.” On stage he also demonized conservatives saying, “If you think they’re gonna stop at abortion and not come for those rights next, you haven’t been paying enough attention.”

His charged political rhetoric spreads blatant falsehood, ones intended to fundraise and get out the vote for Democrats while praying on the emotions of Americans. In last week’s leaked draft of a Supreme Court opinion to be handed down next month, Justice Alito, and by extension the other four justices he was writing on behalf of, plainly wrote that the issue of abortion was totally separate from any marital issues and that this decision would not set a precedent for looking at cases about marriage equality.

“[A]bortion is ‘inherently different from marital intimacy,’ ‘marriage,’ or ‘procreation.’ And to ensure that our decision is not misunderstood or mischaracterized, we emphasize that our decision concerns the constitutional right to abortion and no other right. Nothing in this opinion should be understood to cast doubt on precedents that do not concern abortion,” Alito wrote, specifically mentioning Obergefell v. Hodges, the 2015 case that federalized gay marriage.

If that weren’t enough, exit polling from the 2020 election shows black and LGBT support for Republican candidates rose drastically compared to 2016–the LGBT vote for Donald Trump doubled during that time. Even if Republicans wanted to nix gay and, laughably, interracial marriage, advocating that the court do so would be political suicide.

Sarah Kate Ellis, the CEO of GLAAD, also used the abortion issue to push for a political agenda, in this case forcing through of the Equality Act. Oddly, a video of her speech was not posted, unlike many others during the glitzy, black-tie affair but she did post a tweet thread with the basics of what was in her speech. In one of her tweets, she mentions “far right extremists” who are “encouraging the censorship, criminalization, and even execution of our community and those who support us,” and added, “What was fringe is now becoming mainstream.”

For Gay, Inc., anyone who does not espouse Marxist ideology or accept the existence of 835 genders is a “far right extremist.” No one is aware of any calls for LGBT execution from any conservative–we’re still waiting on the receipts for that. If anything, many of us call attention to the true barbaric executions of LGBT people in the Middle East, while GLAAD and Sarah Kate Ellis remain silent on the issue.

There were other moments throughout the night where the mask slipped, and someone said the quiet part out loud. Pamela Stewart, the GLAAD Board Chairwoman, spoke at one point in alongside Karine Jean-Pierre, Biden’s new press secretary. In a boot-licking ass-kissing speech about her boss, Sarah Kate Ellis, Stewart made one comment that struck a chord with me. She said about the future of GLAAD’s political activism, “What I can guarantee you is this one thing. GLAAD and Sarah Kate Ellis will make certain that we will change and encraft the narrative for news organizations, corporate America, and Hollywood so that you can live your best life.”

What exactly does “change and encraft the narrative” mean? We already know that the progressive agenda is thoroughly entrenched in news organizations, corporate America, and Hollywood. It seems she is admitting that GLAAD is part of the machine that tells those three powerhouses of American society what to sell and tell us, what to make us believe. She’s actually telling the truth for once, and from the delayed applause from the audience, I do not think they expected her to say it so explicitly.

Former soap opera star Judith Light’s acceptance speech also brought cause for alarm, or at least embarrassment. Light, while being a gay rights activist, is a heterosexual woman. She spoke very passionately about the height of her career and working with the LGBT community during the worst of the AIDS epidemic. But toward the end of her speech, she turned to more modern issues, and she included a statement that rings of critical gender ideology. “Let me be clear with you, I would not be the person I am if it were not for [the LGBTQ] community and for GLAAD. I look to this community, to you, to see if I am being brave enough, kind enough, aware enough, conscious enough, sensitive enough, speaking truth to power enough. You are my guide post and my inspiration,” she said.

She’s saying that, as a straight woman, she can no longer function in a world with LGBT people without consulting them first. She must check with her moral superiors to make sure she is not doing or saying something offensive. It’s straight guilt, akin to white guilt from the critical race theory ideology in which white people are told that they are inherently, subconsciously, and consistently racist. The only way to become “anti-racist,” “anti-homophobic,” and “anti-transphobic” is to give reparations and commit to daily self-flagellations. This is beyond absurd and quite pathetic. I do not need Judith Light or any other straight person to feel guilty about being heterosexual in order to make myself feel better.

It is no surprise that a GLAAD function would be full of leftist propaganda for the progressive political agenda, but the rhetoric coming from these activist organizations should disturb anyone in the LGBT community. It is no wonder there are more and more free-thinking people rallying against such hypocrisy and groupthink everyday.

Related Topics:AbortionFrontFeaturedGLAADLGBTNew York City
Up Next