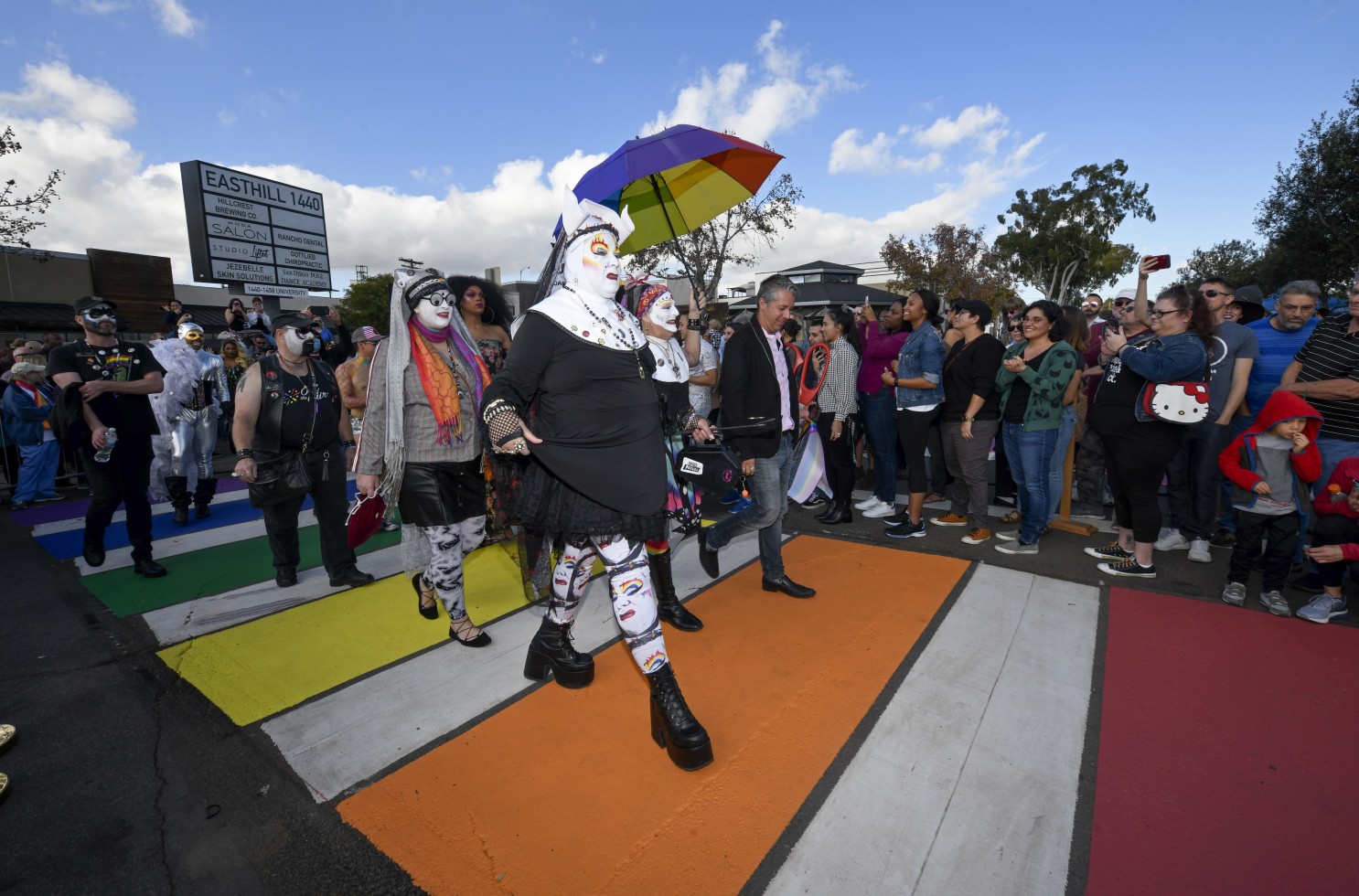 A rainbow crossing in San Diego // The San Diego Union-Tribune

The West Hollywood City Council unanimously approved a plan to replace the city’s rainbow crosswalks with a newfangled rendition of the gay pride flag in an effort to erase gay history and promote the far-left’s racial politics du jour.

The city of West Hollywood currently has rainbow flag crosswalks at Santa Monica and San Vicente boulevards. The city is now set to pave other those crosswalks and paint a new flag that adds black and brown stripes to the original red, orange, yellow, green, blue, and violet.

The controversial new flag seeks “to show solidarity with Black and Brown LGBTQ+ people,” according to The Advocate. Critics and some LGBT activists see the new flag as injecting skin color into a symbol with a message that was previously colorblind and claim the charged new flag is divisive and unnecessary. They also claim it erases the original spirit of the gay rights movement, which had a unifying message beyond race.

The blue, pink, and white transgender-exclusionary pride flag will also be added to a crosswalk on Santa Monica Boulevard, reports Wehoville.

West Hollywood Councilmember John D’Amico said, “as a gay white male of a certain age in this city, I do strongly support this effort to bring new life and new awareness to all the kinds of ways in which we want to make sure people are represented and have a place in our community whether its spoken or painted or written,” reports The Advocate.

Another Councilmember, Sepi Shyne, added that “the reality is, during this pandemic, the mortality rate for Black and Brown lives is absolutely higher than every other person and it is incumbent upon us as the progressive city that we are to do everything that we can to recognize Black and Brown lives.”

Amber Hikes, a radical far-left activist who identifies as “queer,” is credited with creating the new flag in 2017. However, it was actually designed by a marketing firm called Tierney which perverted the iconic gay symbol by adding the unsightly black and brown stripes. The firm claimed minorities are “intentionally excluded” from the LGBT community and cited the need to “raise awareness.”

The marketing firm then pitched the new flag to Philadelphia’s Office of LGBT Affairs, where Hikes was executive director. That year, the racially-alienating pride flag made its debut in Philadelphia as part of that city’s gay pride celebration. LGBTQ activists in Philadelphia and other communities criticized the new flag as unnecessary and divisive. It has since appeared across the country and in Democrat-controlled gayborhoods.

“Updating your flag proclaims with everything that Black lives more than matter. You’re saying that queer Black and Brown representation is who we are, that Black and Brown trans lives are precious and ought to be celebrated, that centering the leadership and voices of those who are impacted is the only way we will arrive at collective liberation,” Hikes said in a statement about the decision in West Hollywood.

The rainbow pride flag was devised by artist Gilbert Baker and debuted in San Francisco in 1978. Harvey Milk, a member of the San Francisco Board of Supervisors and the first openly gay elected official in American history, asked Baker in 1977 to come up with a new symbol for gay pride. At the time, LGBT organizations mostly used the pink triangle as a symbol for the gay rights movement. That emblem was created by Nazis during World War II to identify homosexuals in the same way the Star of David was used to stigmatize Jews. Milk and other activists wanted to move away from that dark association and asked for a new symbol to represent “gay consciousness and freedom.”

The colors of the rainbow flag are meant to reflect the diversity of the LGBT community are are believed to be inspired by Judy Garland’s “Somewhere Over the Rainbow.” Garland was one of the first gay icons. The Stonewall rebellion in 1969, the start of the modern gay rights movement, occurred the evening of Garland’s funeral in New York.

In 2012, West Hollywood became the first city to have permanent rainbow crosswalks painted on the street. Sydney, Tel Aviv, Seattle, St. Louis, Chicago, and Minneapolis are among other cities that since have painted the original, iconic gay symbol on crosswalks.