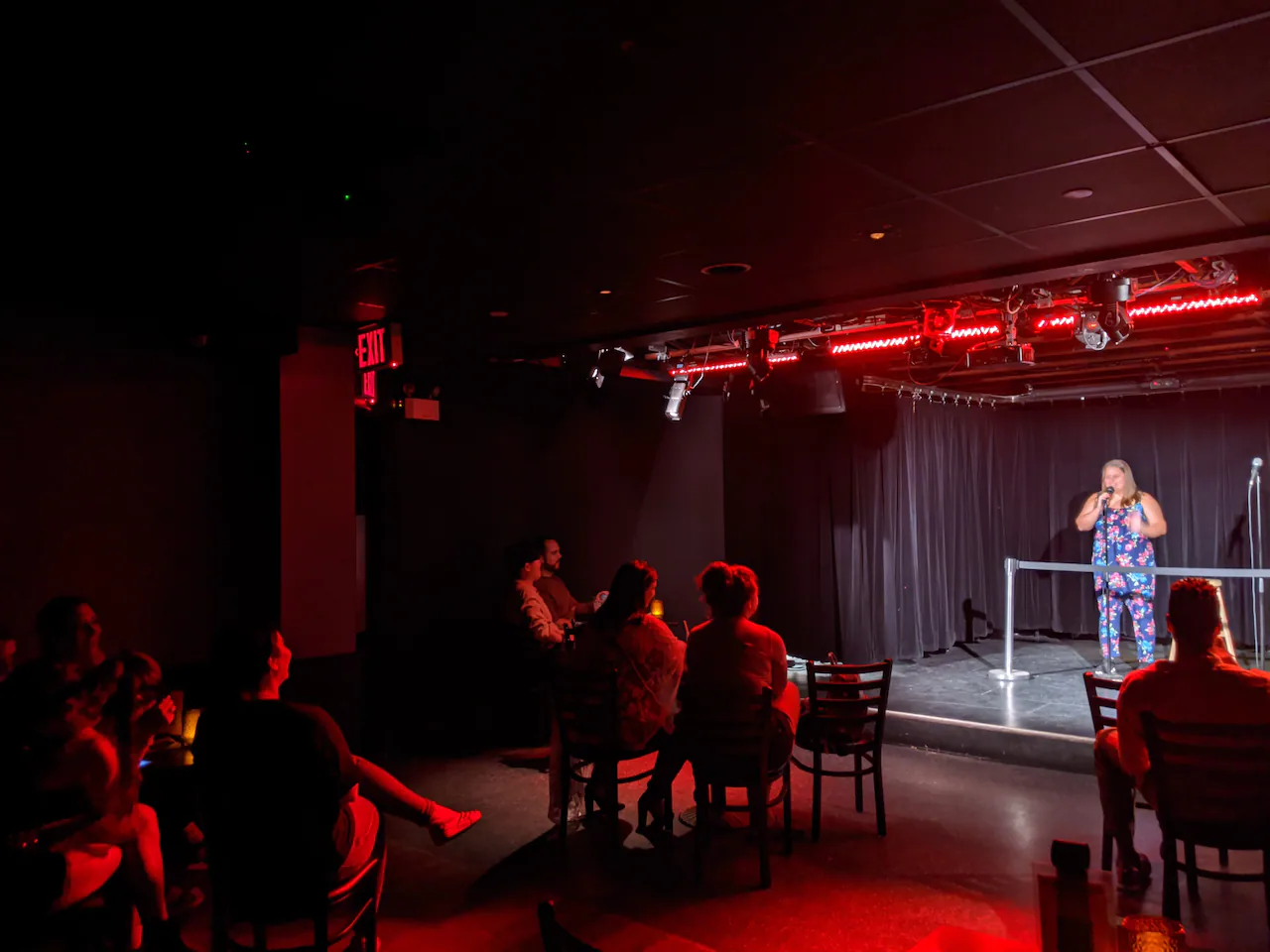 A comedian performs at a Covid-compliant nightclub in Toronto // CBC

On a recent trip back to the high desert, I made plans to go to one of Albuquerque’s only gay bars to catch the tail end of happy hour before my friends joined for karaoke night, which had been our tradition.

I thought I was well acquainted with the overly zealous, blatantly communist brood of LGBT cretins crawling about my old hometown. Turns out, it’s even worse than I knew.

On my way to the bar, a friend informed me that there was a comedy show in progress. That’s never a text anyone wants to receive, but despite a twinge of uneasiness, I parked my car and approached the building anyway, where a bevy of blue and pink-haired smokers waited for their vegan hotdogs from the food truck outside.

The creaky door slammed shut behind me, announcing my arrival, and I saw a poster on the wall that read “Queer and Trans Comedy Night.”

“Oh, fuck,” I muttered. Which circle of hell was I about to enter?

The regular bouncer, a rotund lesbian with a stripper’s name, squealed when she saw me, remembering me as “the angelic-voiced Lana Del Rey singer” from karaoke nights past. I showed her my ID.

At the end of a dark hallway I heard the audience clapping as a new performer took the stage. The stench of body odor and moral degeneracy hung in the air of the dingy room, emanating from a crowd of androgynous humanoids with David Bowie haircuts. After a quick scan of the room, I realized I had no idea who was male and who was female.

As the next performer was announced, a loud court jester type ran onto the stage. He was dressed absurdly, with a frame almost as emaciated as his brain, and wore a surgical mask despite being at least 15 feet from the nearest person. He introduced himself and immediately stated that he preferred “they/them pronouns,” but his Adams apple, the size of a mango, may have betrayed that. I rolled my eyes and sighed. The clown said that he identified as a “non-binary bisexual.” I assumed this was the first joke, and chuckled loudly enough for a Rachel Levine lookalike sporting a five-o’clock-shadow to shoot me dagger eyes from across the room.

I tuned out the comic-wannabe for the next few minutes as I attempted to parse the meaning of “non-binary bisexual,” since apparently it was used unironically. As a non-binary, you are rejecting the idea that gender has to be binary; however, as a bisexual you are confirming that gender is binary. Furthermore, if you are bisexual, that means you are only attracted to males and females, not other non-binary people. Wouldn’t that be considered bigoted or “transphobic” by the left’s standards? “Non-binary bisexual” is simultaneously illogical, hypocritical, asinine, and oxymoronic. In other words, it is quintessentially woke. Or, given the setting, it’s for laughs while being not very good comedy.

My attention snapped back when I heard the performer refer to the audience members as “comrades.” The cheers of the many communist sympathizers drowned out my groan. His next set of “jokes” included reading a list of insults he’d been called in newspapers and on Twitter. He’d been called a “soy boy” and “beta cuck,” he laughed. Where’s the punchline, I wondered. When he got to the last item on the list, he proclaimed that he was proud of this label: “Antifa scum.” Several audience members erupted in cheers and applause.

I walked over to the bar to order the strongest drink I could. At long last, a friend finally walked through the door as a beacon of hope approaching my table. She smiled and hugged me. I looked behind her and saw a waif of a female with a butch haircut. My friend introduced the interloper, “They wanted to come to the comedy show,” she said. I retorted by asking if her name was Sybil, but my dated Hollywood reference went unnoticed. Before she could even say hello, the butch girl asked me what my pronouns were. I told her to take a wild guess.

I didn’t say much else as the comedy show came to a close. What was probably a half hour felt like a year as I buried myself into Twitter. As soon as the last man in a skirt descended the steps of the stage, the gender-benders scurried away like cockroaches from a flashlight. They wouldn’t dare stay and associate with people who are not like them. During my seven years coming to that bar, I had never seen any of those people, and I doubt I will ever see them again. Throughout the night, I watched as all of these remarkably unhappy and bitter people pretended to have a clue about how the world around them really works. Not only were they humorless, most of them ignored or mistreated anyone who wasn’t dressed like a Trapper Keeper.

As the typical karaoke crowd entered the bar, I immediately noticed the mood and air of the room shift and become lighter. These activist “comedians” were there under the guise of performance, but as far as I could see, there was no comedy—there were no jokes. It was a circle jerk session of rage and oppression. They were there to talk about how hated they are and to bask in each other’s woe.

I do not feel I am saying anything revolutionary. I am merely speaking the truth that the other cis-gendered people in the room refuse to say. Their forced laughter was just as painful to watch as the self-flagellating activism on stage. Those woke gays and lesbians will keep quiet in the name of support and solidarity, which in the long run does a massive disservice to any of those performers with actual comic aspirations. One day these activists will perform for a different crowd in a different venue, and they will be met with a much less friendly but well-deserved response. That unpleasant response will be labeled as bigoted and transphobic, begetting even more rage and sense of oppression. It won’t occur to them that they just aren’t funny. Thus the cycle continues ad infinitum.

AOC puts her stamp on erasing an LGBT tribute in Queens