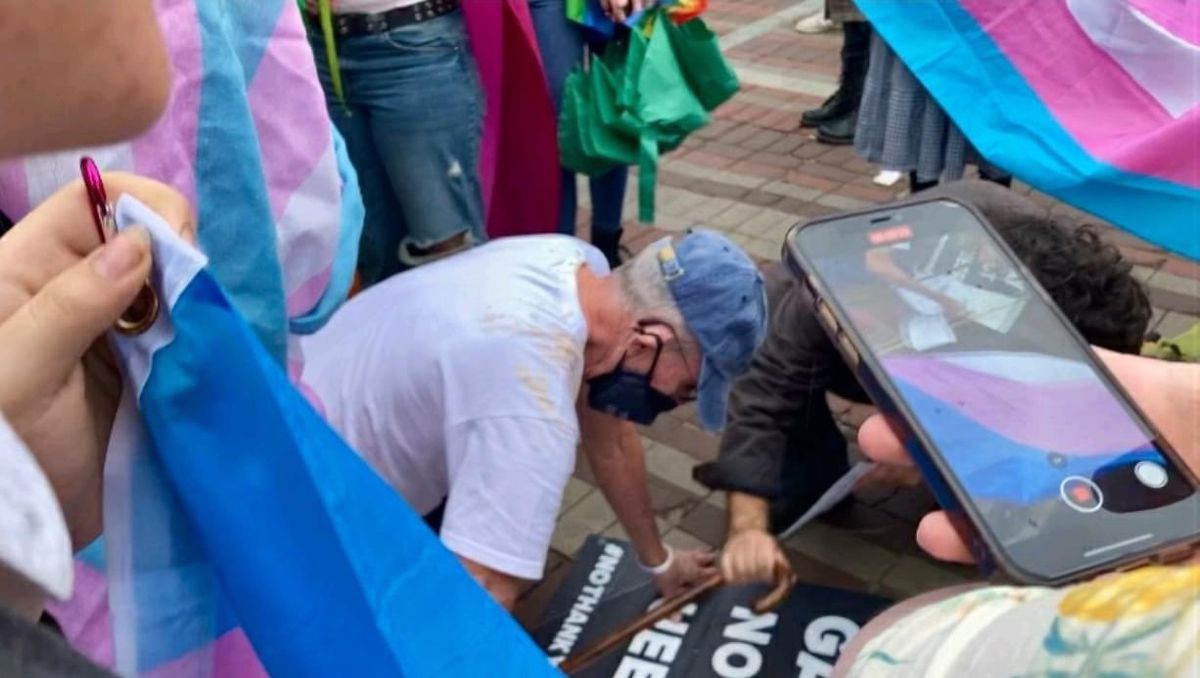 Gay rights pioneer Fred Sargeant was pushed to the ground by trans activists at a Pride parade in Burlington, Vt. over the weekend // Twitter

This past weekend during the Burlington Pride festivities in Vermont, a living legend of the gay community was assaulted by trans activists. Fred Sargeant, a 74-year-old gay rights activist, went to the parade to protest the new radical gender ideology infecting the “community.” He calls the new movement “homophobic” and “exclusive.” In his protest, he held a sign that had the phrases “Black Face” and “Woman Face” crossed out in red, alluding to the fact that if a white person imitating a black person is considered derogatory and inappropriate, then so should a biological man moonlighting as a woman.

The activists took offense to his sign and his presence at the event, which is open to the public, and they assaulted him. “So, I went to Pride to protest their misogyny, homophobia, exclusionary policies and divisiveness. I was met by screaming, multiple assaults, ageist comments, shoving, slaps to the back of my head, pouring coffee on me and repeated attempts to steal my signs. Being unsuccessful in their attempts to disrupt my protest and drive me away, the mob pushed me to the ground as the parade ended, further injuring me,” Sargeant wrote on Facebook. He further added, “They stole or damaged more than $550 worth of my property.”

Sargeant is a testament to the gay community and the gay rights movement. He was present at the Stonewall riots; he co-led the very first gay pride parade in New York City in 1969, which was called the Christopher Street Liberation Day march at the time. He is literally one of the founders of our movement. These trans activists should be thanking him and hugging him, not throwing coffee on him and pushing him to the ground.

In response to this egregious attack and the mounting list of atrocities the trans activists have perpetrated, I offer the immortal words of Tamara from the Real Housewives of Orange County, “I want a divorce. Fuck you.”

It is high time the TQ is dropped from the LGBTQ. Aren’t we tired of pretending that sexuality and gender are somehow connected? Someone with an attraction to the same biological sex and someone suffering from gender dysphoria are in no way comparable. As such, the recognition and rights that each group seeks are fundamentally different. Lumping the TQ in with LGB was flawed from its conception.

In the beginning, sex and gender were two separate concepts. The former was biological and scientific, while the latter was more psychological and in some cultures spiritual. However, the new radical ideology has whitewashed the very important and scientifically based distinction between sex and gender. The changes and attacks on language have been constant and incessant. From made up pronouns to adopting Xs where they do not belong solely out of a plea for inclusivity is insane. We can’t even agree on what a woman is anymore. Yet by and large the LGB has overlooked it.

Now that the TQ is ensconced within our community and gay rights have basically been accepted as commonplace, the activists are emboldened to ride our coattails and success. But it’s as if they learned nothing from the LGB. Instead of incremental change after a long and difficult fight, they demand their list of needs be met overnight. They have rewritten and injected themselves into our history. Ideas like “The gay rights movement was started by trans women of color” are now accepted as gospel when they have no basis in reality. The gay rights movement was started thanks to the actions of men and women like Fred Sargeant, yet we see how they thank him. They have become militant and hypocritically violent. LGB Alliance reported that the same activists that assaulted Sargeant were handing out stickers that read, “If you don’t stand for trans rights, you won’t be standing much longer.” For a group that shouts about their victimhood and claims “silence is violence,” they seem to embrace actual violence wholeheartedly.

What’s more, these activists believe themselves invincible and get away with these actions because they feign oppression and collude with the media, leftist politicians, and Gay Inc., like GLAAD and HRC. Yet by and large the LGB has overlooked it.

Under that cloak of invincibility and with the help of their coconspirators, the TQ is now pushing their radical agenda on America’s children. They assert that children not yet old enough to vote or buy cigarettes can choose to start medical treatment to change their gender. They lobby for permanent and irreparable genital mutilation and hormone therapies under the unassuming and disingenuous name of “gender affirming care.” They call for indoctrination and grooming of children via the education system. And they do all of this in the name of the LGBT community. We, the rest of the LGB, are thus guilty by association. That is a bridge too far.

Many in the LGB section of the community have had enough. This radical and extreme activism is what has spurred the inception and growth of organizations like LGB Alliance and Gays Against Groomers. These organizations and people like Fred Sargeant are pushing back. Many have been silenced or canceled online for this and Sargeant has now been physically attacked, but we persevere. Fundamental and irreconcilable differences have led to countless divorces in the past. It is time for the LGB to annul this unhealthy bond with the TQ and take full custody of the children on the way out.