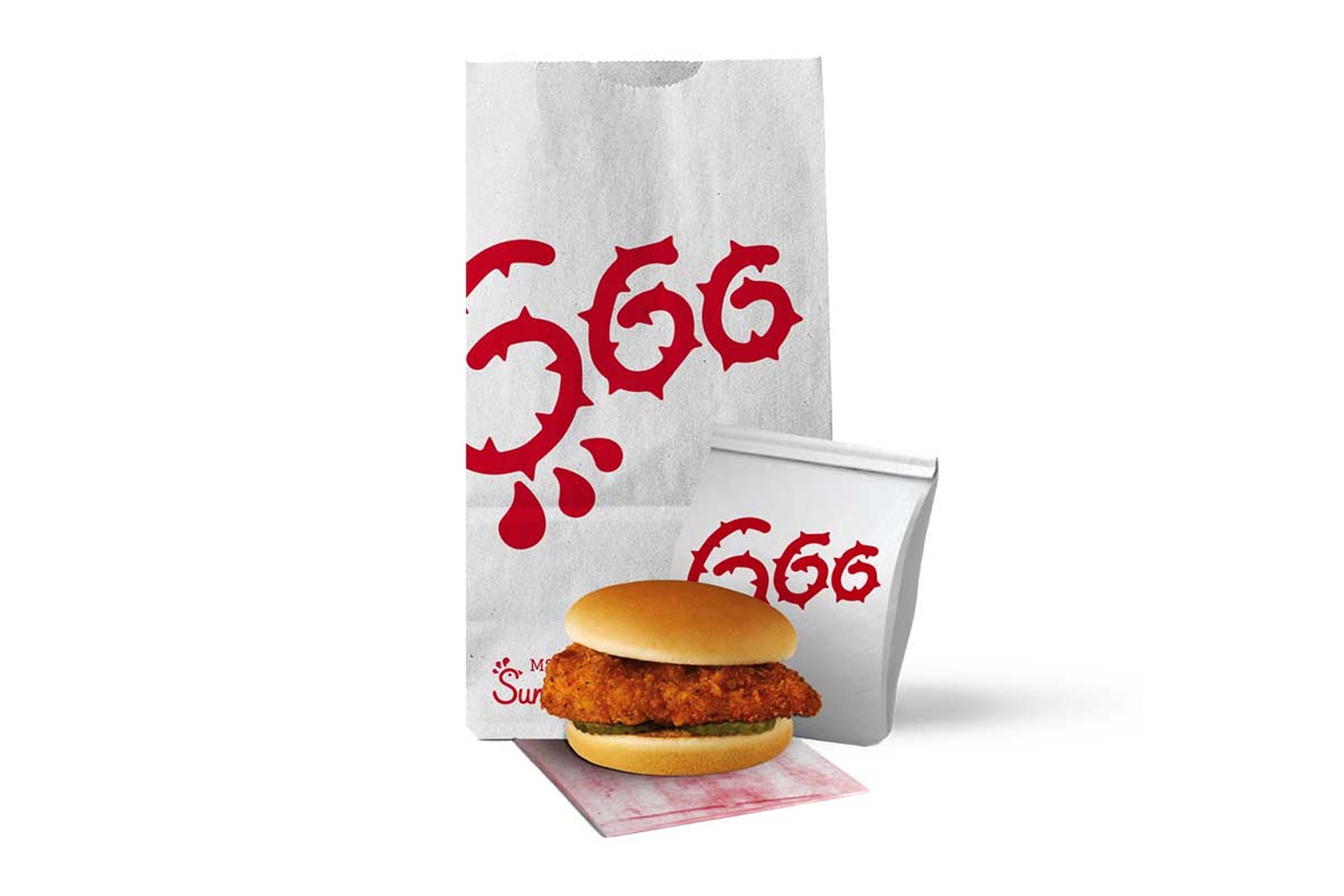 The same art collective that partnered with gay rapper Lil Nas X on his Satan Shoes is now selling Chick-fil-A on Sundays without the restaurant’s permission.

MSCHF, the group that created the controversial Satan Shoe, will be selling Chick-fil-A sandwiches in New York City on Sundays, a day that the fast-food chain is notably closed.

The group announced the new project online this week calling it MSCHF Drop #55, their planned “Sunday Service.” The ordeal appears to be a senseless jab at Christian traditions and the fact that Chick-fil-A was founded by a devout Christian, S. Truett Cathy. The art collective will reportedly offer “not-so-fresh” and “limited” supplies of Chick-fil-A sandwiches that began Sunday Sept. 26.

The art collective has rebranded the sandwich’s packaging using the stock Chick-fil-A colors and font, but instead of the brand name the bag reads “666,” the number that signifies the Devil in the Christian tradition. The sandwiches will also cost $6.66 each.

A special website has been created for the product which displays the question “Should Chick-fil-A serve on Sunday?” with possible responses “Hell yes!” or “God Nooooooo!” No matter which option is chosen, the next page displays the price of the sandwich and a way to reserve one ahead of time.

Related: A Gay Defense of Chick-fil-A

The website further quotes a passage from the Bible suggesting that one may eat or drink anything he or she pleases on Sundays, the day taken as the Sabbath in many sects of Christianity.

“Therefore let no one pass judgement on you in questions of food and drink, or with regard to the Sabbath. – Colossians 2:16” the site states. It appears the art group has missed the point of Chick-fil-A being closed on Sunday. According to Chick-fil-A’s website, the founder felt it important to give the employees a day off to spend time with family, rest, and worship if they were so inclined, not dictating what can or cannot be consumed on Sunday. “Truett saw the importance of closing on Sundays so that he and his employees could set aside one day to rest and tend to ideals he deemed more important than business–a practice we uphold today,” the fast-food chain’s site reads.

MSCHF’s website also mocks conservatism, Christianity, and capitalism by suggesting that they will fill a hole in the market and sell Chick-fil-A’s food on a day that it is not otherwise available. “Certain American values go hand in hand. For example, conservative Christianity pairs perfectly with a correspondingly devout faith in the ‘free market.’ That being the case, f**k it, let’s take advantage of the obvious hole in the market left by notoriously Christian restaurant chain Chik-fil-A’s sabbatarianism,” the website reads.

They continue with an even more provocative statement saying that buying their version of the famous chicken sandwich is the consumer’s way of praising Satan. “‘The market finds a way,’ and, in this case, it’s the road to hell. Hail Satan and Eat Mor Chikin on holy days.”

MSCHF is most likely not a licensed vendor of Chick-fil-A products, yet the group is blatantly using a trademarked Chick-fil-A symbol on their marketing and recreated bags. According to the Gerben Trademark Library, the famous “C” in the Chick-fil-A name is branded to look like a chicken and is a registered trademark along with their catchphrase “Eat Mor Chikin,” which were both used by MSCHF.

As of yet, Chick-fil-A has not responded to the news of the art collective’s project, but if history is any indication, that silence will be short-lived. “The company has been particularly fierce in defense of their intellectual property and trademarks. To date, they have successfully protested at least 30 instances of the use of ‘Eat More’ in other advertising,” the trademark library website states.