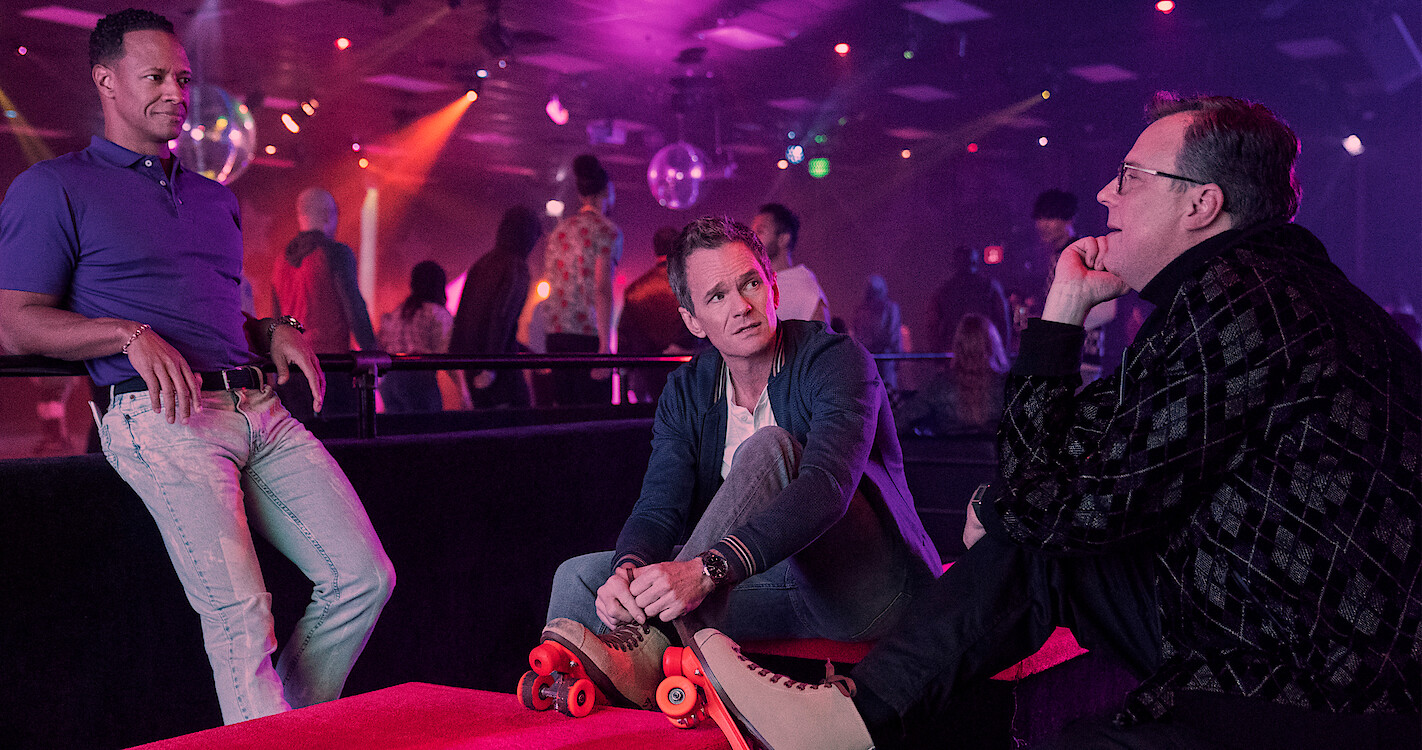 You can be homosexual anywhere. But to be gay, at least in culture, you have to be an effete New Yorker who socializes with the rich and is in crisis.

Sure, there’s San Francisco and Los Angeles, but to be gay there is but one form of West coast sexual liberation. You only have Stonewall, Studio 54, Andy Warhol polaroids, and Broadway in New York. American gay culture was birthed, normalized, raised to stardom, and almost wiped out by that metropolitan cultural colossus.

And so, it is only natural that Uncoupled tells the story of Michael (played by Neil Patrick Harris), a high-end real estate agent in New York, who’s suddenly ejected from his 17-year relationship, when his slightly older but handsome investment banker boyfriend, Colin, packs up his stuff and leaves him without explanation on Colin’s 50th birthday. From here, its showrunner, Darren Star, tries to do what he did in his previous shows Sex and the City and Emily in Paris: find a blend of sentimental pathos, friendship, and comedy in his new romantic position, as Michael navigates being single in the Grindr-era, with its shallow libidinousness and (often feckless) search for something deeper.

It’s rare for something so milquetoast and corporate to have this much thematic and narrative potential – using a universal story of heartbreak to explore the specific communal struggle for gay men to find meaning, in either monogamy or lasciviousness. But Star doesn’t want to make that show; he wants a big, corporate hit, and ends with something entertaining but artistically flaccid.

The pinnacle example of aesthetic failure, and the clash of good art and his commercial mentality is in its narrative structure. At its core, Uncoupled is a psychological, character-driven story of a man wrestling with his confusion, insecurity, and new-found isolation; but, piled atop it, is a plot-driven mystery of why the boyfriend goes missing, and a corporate television executive’s desire to make another hit episodic rom-com. When the show leans into Michael’s psychological arc – particularly during a birthday speech in the first episode – the show is rich and compelling, pulling you into its world, and an excellent blend of comic absurdity and intimate pathos.

Throughout the history of gay culture, there has been a central question of where to find meaning; whether meaningful monogamy is necessary or desirable given the impossibility of having children, or whether the unique hedonism and experimentation afforded to gay men is sustainable in the long-term. Even pre-AIDS, this was the central concern of Larry Kramer’s brilliant Faggots; that within gay life is a spiritual disease that was destined to wreck it. The newly-single, average-gay Michael could serve as a helpful vessel to explore this theme, as his loneliness confronts the gay single world, and his moves are influenced and informed by the lives of his two close friends, the perpetually single art-dealer Stanley, and the perpetually twink-cladden TV host Billy.

But the ‘mystery’ aspect and repetitive episodic structure comprehensively undermines Michael’s story; both as character drama and sociological exploration. When the crime at the core of a mystery is bougie gay heartbreak, it’s hard to feel invested; and a repetitive episodic sit-com structure, where everything started is resolved by episode end, makes it impossible for him to change and grow. In every episode between three and seven, Michael meets a different kind of single gay man, only for the potential coupling to collapse by episode end; and what thematic potential this has – of the fruitless, short-lived nature of most gay encounters – is undermined by how oppressively formulaic these episodes are. By the finale, it is obvious the previous two and a half hours were filler that could have easily (and more effectively) been summarized in a 30-second montage–as this would have been, were this a movie and not a stretched out mini-series.

The only constant is encounters or mentions of Colin. Occasionally these moments are emotionally resonant, reminding Michael of the life that could have been that he has lost – such as when Colin leaves the family group chat – but the showrunners are allergic to sustain pathos, so unwind it by adding over-the-top comic dialogue (such as Michael’s outraged reaction to finding Colin has a dog), or turning them into puzzle pieces in the audience’s journey to find why Colin left–when that’s totally against the character arc of the show. Michael needn’t know why Colin left – his arc is accepting and moving on from that confusion and pain – and the answer ultimately provided is limp and inoffensive.

Had they stuck to Michael’s perspective, and made it a character-driven show, Uncoupled could have been fantastic. Harris excels as this character, and if they gave him more breathing space, cut the filler, and favored flashbacks over exposition, he would have shone. Michael doesn’t know why Colin left but, by focusing on his perspective, the audience would see there’s clearly more to the story than he can see, and made Michael a more complex character. Then, the penultimate episode could have been a flashback exclusively from Colins’s perspective, showing what happened leading up to and on the day of the breakup. Doing so, you would provide the audience with explanation and context that Michael is too blind to see, and set up a more tense, complex finale, where they will finally encounter each other again, with the audience knowing more about what actually happened than either.

Ultimately though, the show is too clean and neat for that. Netflix is looking for gay Sex in the City, the next Emily in Paris, not the richer, sharper show it could be. It will mention poppers and gay hedonism, but Uncoupled shows neither. Michael can never get dirty or fucked up or cum-soaked or drug-addled; in his grief and confusion, he can never drag himself into filth and hate himself for it, or love it. He just has to be as clean and neat as his actor, and only upset or wrong in a prissy social setting way. It’s remarkable how a show that makes a conscious effort to show every kind of gay person, and tell a universal story of heartbreak and confusion, so fails at giving them any real humanity.

Will & Grace and Ellen were breakthroughs for gay representation in television, but not gay aesthetic; and in the 30 years since, Uncoupled has an even broader, more thorough representation of gay life, but hasn’t moved beyond that bland, middle-brow aesthetic. Uncoupled is corporate; gay life as advertised by Costco; and the weirdest thing it offers is drag, the most sanded-down, sanitized, heterosexual-friendly version of actual gay hedonism. It’s bitterly ironic that, having led visual art innovation in the 20th century, gay men are so abandoned by the medium in the 21st.

It doesn’t want to celebrate or show that lifestyle, but it doesn’t want to be too critical either; and it knows it can’t be. In the cold open of episode five, Michael is about to hook up with a younger guy who is surprised by Michael’s request to use condoms. “It’s a new world now. There’s PrEP, there’s post-exposure medications. We’ve given condoms and network TV back to the straight people, where they belong,” the guy says.

Amid its tasting menu of modern gay life, Uncoupled stumbles onto a meaningful issue – the reckless lack of condom-use among young gay men – but can’t land a punch. With its clean, light tone and look, to make the point directly would be an unintentional, dull PSA; and yet, by leaning back, telling this message through Michael’s nervous, germophobic perspective, they infer a dangerous neutrality about condom use (which has aged particularly poorly with Monkeypox).

It’s also worth noting that there are women characters. If this were a film instead of a miniseries, they would be fun, quirky characters who appear for one scene; but it’s not, so they’re dragged out, robbed of wit, and steal too much screentime. You are given as much reason to care about them as I display here; so I will move on.

It’s hard to be offended by Uncoupled, an easily bingeable, pleasant series; but it’s a two-hour rom-com stretched out and kneecapped to appeal to the broadest audience, appease cultural critics, and get a Season Two. It has all the signs and potential to be something rich and great; but instead, it just wants to be popular.