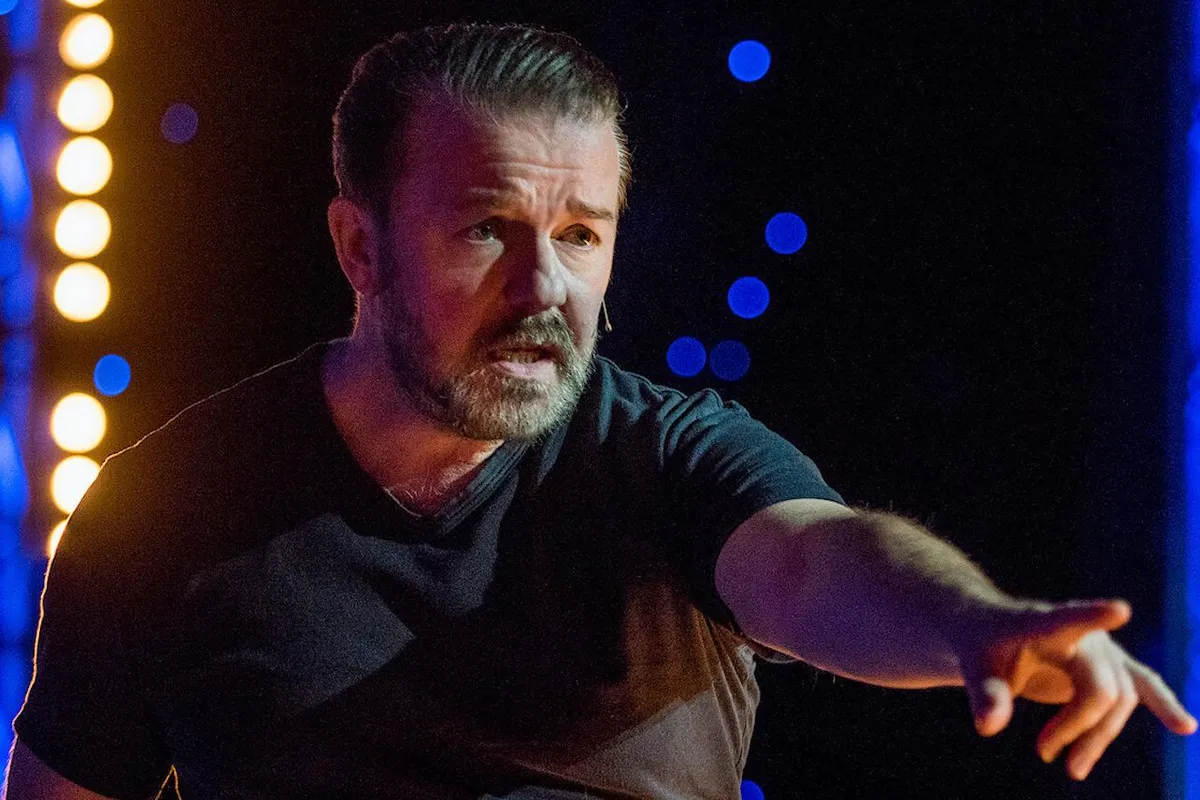 You’ve probably seen the clip from Ricky Gervais’s new Netflix special, Supernature, in which he talks about “new women.” Struck from context, it’s a somewhat bumbling, predictable, though well delivered segment minted for GLAAD condemnation. Beneath every viral posting of it–or basically any mention of the special–is also a reply-guy posting the same clip of comedian James Acaster. Taken from his 2019 special, Cold Lasagne Hate Myself 1999, Acaster’s ‘bit’ is a somewhat witless, sneering response to “edgy comedians,” reducing their segments on transgender people to high-minded but thoughtless bullying and their audiences as of a kind. He ends the segment by noting that he gets more laughter when he leaves the targeted comedian nameless, instead of saying Ricky Gervais.

Despite being a somewhat talented comic, Acaster’s segment perfectly demonstrates how hard it is to do a stand-up segment referencing trans people–be it making jokes about them, or segments defending them against jokes (however patronizing that may be). Dave Chappelle’s brilliant The Closer was the last appearance of great jokes discussing the subject, but now transgenderism joins airplane food and Donald Trump as topics that all the humor has been wrung from. There are not going to be new, interesting observations or jokes that mention the subject; and I don’t exempt Gervais from this.

His jokes about transgenderism are notable only by how much attention they get, how relatively dry they are among his set, and how comparatively inoffensive they are to some of his other jokes despite the outsized opprobrium they have provoked. Even so, to watch clips stripped of context and then see them in the full body of the special reminds us of that oft forgotten but crucial point about stand-up comedy; the performer is playing a character, and everything they say must be understood through that role. We’ve largely forgotten this due to the hectoring of figures like Acaster, where the character is but a hyped-up version of his authentic self, but all comedians, great or not, use a persona. George Carlin was not a perpetual crank. Chris Rock ordinarily talks without his comic ‘stank.’ Amy Schumer is not the same on stage as she is in her private life (one hopes). Anthony Jeselnik – the greatest working stand-up comedian – is not actually a psychopath, he just plays one. The same is true of Gervais, and though these trans jokes don’t work as discreet bits, and are far from his best work (in this special or generally), they can only be fairly considered through the voice of his character.

Gervais has a penchant for offensive humor but, on stage, his deluge of controversial topics are observed and presented through the vessel of a character–his comic persona. The character on stage shares the name, image, and wealth of the man who performs him, Ricky Gervais, but replaces his normal humanity and social intelligence for the all the worse traits you associate of those who find themselves flush in fame and wealth–narcissism, delusion, moral apathy, no relation to the normal man, and condescension.

This pairing of character and subject laces his jokes with irony, by both stylistic choice and necessity. Here, the medium is the message, and its in taking these familiar but controversial topics and commenting on them from his warped perspective that he renders them novel and genuinely hilarious. Gervais’s recollection of Liam Neeson’s cancel-culture story would be fairly dry and unremarkable, but it’s the absurd lens that this persona provides that makes it rich. Rather than being offended by the manner of the story, or the psychological strangeness of it, his attention is focussed on the weirdness of Neeson having a “kosh,” and ends on the punchline, “I wondered whether I could still find Schindler’s List funny.” Rather than outraged by the content, his persona seems to find this a very confusing PR incident. By the target being an observed absurdity, seen from an inherently absurd lens, offense is but a spice, and some of the special’s best jokes could make the Sunday morning cartoons, like one about the strangeness of the platypus.

This persona provides the voice of all components of his jokes; the observations, the asides, the corrections, the surprising turns, and the reflexive explanation that yes, that was a joke, keep up. Whereas some comics lecture from the late-night pulpit, Gervais lampoons this by making it but another bit. The very act of explaining his irony skewers such over-explanatory, lecturing comics, as his presumptive, narcissistic persona presumes the audience is too stupid to understand his wit. Though, if one looks to Rotten Tomatoes critic scores or GLAAD press statements, you’d think they’re necessary.

Though GLAAD has the moral fortitude and social significance of a wet tissue, it’s worth underlining how comically absurd such condemnatory statements are. They require the complainant to have listened through Supernature, unruffled by jokes about masturbating to images of baby Hitler, finding Schindler’s List funny, pedophilic teachers, weird animal penises, and brutal gallows humor, but start gnashing ones teeth and screaming bloody murder because he mentioned something tangentially related to you –precious, special you–or a group you condescendingly view as being too vulnerable to be referenced in jokes–and that’s just intolerable. SUMMON THE PRESS! I AM UPSET AND THE WORLD NEEDS TO HEAR IT! Meanwhile Middle Eastern countries execute their citizens for the ‘crime’ of their sexuality, and such organizations don’t let out a bleat.

One of the leading critiques of ‘edgy’ or ‘offensive’ comedy is an objection to ‘punching down.’ Culturally appropriated from mightier-than-thou journalists, it supposes that comedians must ‘hold truth to power’ and only joke about the more powerful–a logically coherent heuristic that also fails to understand how jokes work. Namely, there is a sharp distinction between the subject of a joke–the topic that leads to a punchline–and the target–where the humor arises from. A joke about race is not racist unless the supposed truth of a racist trope is the intended punchline. Similarly, a joke is not transphobic or homophobic by mere mention of gay or trans people, or drawing light of contradictions and tensions within their lives, and Gervais is not mocking trans people. Also, if you take his AIDS bit as serious or an endorsement of homophobic conspiracies about it being ‘God’s wrath’ for homosexuality, you’re, frankly, an idiot.

The irony is that, if anyone’s comedy is authentically ‘punching up,’ it’s Gervais. Yes, he’s very rich. One of the best jokes in the special is about his being a minority–in comparison with the 5% of the British population that is LGBT, he is among the far smaller, oppressed 1% “white, heterosexual, multi-millionaires.” “And you don’t hear me whining about it,” he says. But Gervais embodies the meritocratic rise that Hollywood falsely advertises but rarely demonstrates–a man of a genuine working class background who retained his humility, long-time girlfriend, and laddish humor. He ends this special as he always does, by breaking from his persona and recounting stories from his childhood, of how humor helped his friends and family through the best, worst, and most mundane moments. They remind you that–however brutal a joke may be–there are few things that can bring people together, breaking down their barriers, than making them laugh.

The natural corollary of this is that his whole comic presence is based around taking down a certain celebrity image that he is incorrectly bundled in, be that by consciously separating himself from them at the Golden Globes or before a more receptive stand-up audience, mocking their out-of-touch elite mentality, and poking at the oversensitive topics that they deem out-of-bounds. How is that anything but ‘punching up’?

Compared to the last special I reviewed, Chappelle’s controversial opus The Closer, Gervais’s special is a lumbering, far less composed piece. Some jokes simply don’t land, some drag, and others feel like ghosts of better jokes told in his older specials. His work will never surpass the high bar of his Golden Globes monologues.

But then again, what could?

This is a genuinely, if unremarkably, funny special and it’s good to see Netflix standing by its top comic talent, letting them perform without the restraints of the out-of-touch class he parodies.

And just in time for Pride month!

Related Topics:ComedyEntertainmentFrontFeaturedGLAADLGBTNetflixRicky Gervais
Up Next

‘Sex and the City’ reboot proves wokeness is anti-art