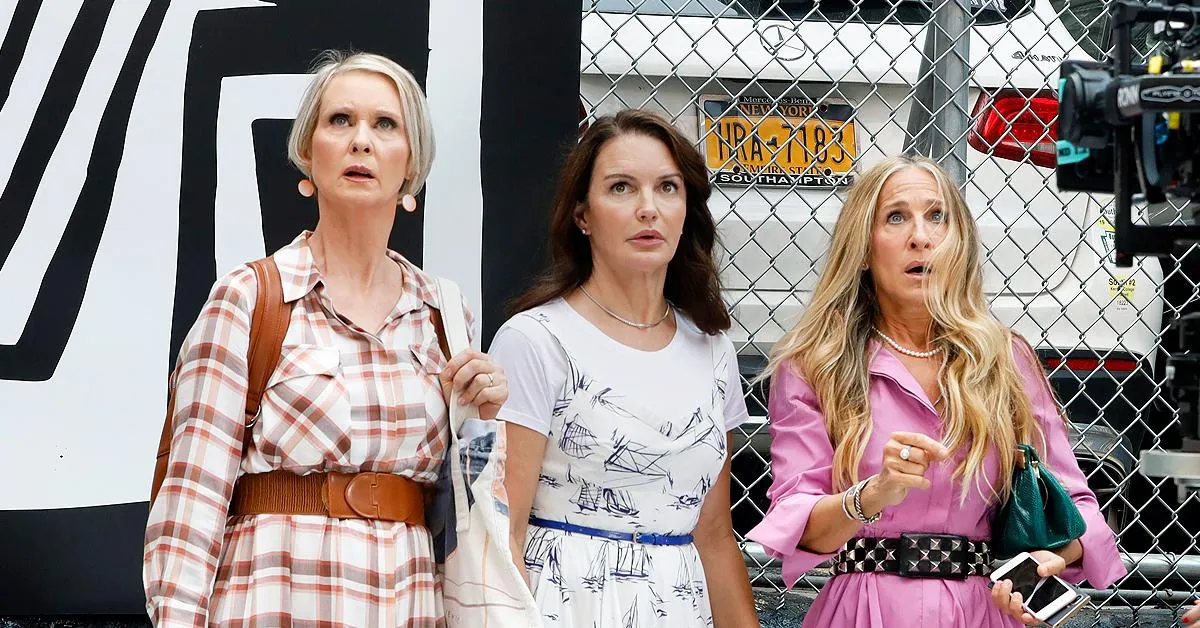 Cynthia Nixon, Kristin Davis, and Sarah Jessica Parker star in 'And Just Like That' // HBO Max

There’s an irony to the law of attraction.

It goes a little something like this: if you try too hard to make somebody like you, it’ll backfire and repel them. Only then, when you’ve given up the ghost, will they suddenly become interested.

The moral of the story? Stop trying so damn hard.

If anybody should know this, it’s Sex and the City’s Carrie Bradshaw and her best friends, Charlotte York and Miranda Hobbs, who make up the main protagonists in HBO Max’s new reboot of the hit show, And Just Like That.

Such wisdom is exactly what viewers should expect from three urbane women in America’s most alpha city. After all, they’re heroines. And, given what we already know of them, anything else would lack artistic integrity.

Yet, unfortunately, because left-wing politics now infiltrates, and destroys, everything in its path, including plot development, these beloved characters–each adored by hordes of gay men–have been lobotomized into a bunch of grey NPC memes. And it’s painful to watch.

Not just because the writing is poor, or because the story arcs are unbelievable, or the fact legendary costume designer Patricia Fields is off doing Emily in Paris, so Miranda’s wig looks like a dead cockapoo. It’s painful because, for many gays, the original show was special.

Created and written by gay men, namely Darren Star and Michael Patrick King, it tapped into many a something they understood. And, as a result, it exerted loyalty from them.

Sadly, that loyalty has now been carelessly discarded by creators of the new show, who obviously have new, better peers to impress.

The evidence of this is everywhere–from the fact Charlotte is suddenly racist and unable to tell two black women apart, to Carrie flirting dangerously with cultural appropriation during Diwali. It’s all so toe-curling. But it’s particularly bad when it comes to the LGBT themes that are now coming into focus.

See, in case you’ve missed it, Miranda is currently in the process of an incongruous lesbian awakening with a butch, charmless woman–which essentially means Cynthia Nixon is playing herself.

I’m guessing she isn’t doing this because the audience appreciates it (they don’t). Or because it’s a natural evolution for her character (it isn’t, Miranda once dabbled in a same-sex relationship and hated it). Nor because it’s cutting edge (oh, please). Instead, she simply appears driven by that smug, sanctimonious self-belief that’s so prevalent in so-called progressive Hollywood circles. I mean, come on, even her Twitter bio says she’s a “progressive advocate.”

And, in a recent interview published by the Herald Sun, the 55-year-old actress practically admitted as much. She criticized the original show for being “tone deaf on race and gender,” even though it pushed boundaries and, crucially, made people laugh.

“It’s part of the reason we wanted to do the [new] show – to go back and [undo] the things that we really got wrong,” she then told Elle magazine, unaware that she was insulting fans in the process.

Unsurprisingly, her new ‘serious’ approach to light entertainment is not appreciated by many. Currently, the show has a rating of 5.4 out of ten on IMDb, which is pretty abysmal for such a beloved franchise. Out of 12,000 user reviews, a whopping 2,651 of them have given it a rating of one out of ten.

One user wrote: “Didn’t think it was possible, but each episode gets progressively worse,” while another observed: “It felt pretty nostalgic watching this. However, what ruined it for me was the ‘wokeness’ – it just felt so forced and made me cringe. Doesn’t feel natural.”

And that’s exactly my point. It doesn’t feel natural because it isn’t natural. Like all political propaganda, it’s contrived. Even the New York Times slammed it as “an awkward bid at relevance.”

As a result, it seems almost destined to fail, which is yet another disservice to all the fans who deserved better. As HBO Max is a subscription service, there are no viewing figures to prove this theory of terminal decline, but ignored history is often repeated.

Just look at what happened with the all-female Ghostbusters. It was an absolute train wreck that totally tanked at the box office, losing an estimated $70 million worldwide. All the planned sequels were scrapped, even though they were once described as “inevitable.”

Likewise, Ocean’s 8, the all-female version of Ocean’s 11, was another non-starter. Despite performances by Sandra Bullock, Cate Blanchett, and Anne Hathaway, it was totally shunned by cinema-goers and derided by critics.

Meanwhile, over in the UK, viewers have deserted the TV series Doctor Who since the doctor “regenerated” as a woman. Not because she’s a woman, I might add, but because she hectors viewers like a man-hating feminist, which is never entertaining.

Maybe somebody should tell Cynthia Nixon that.