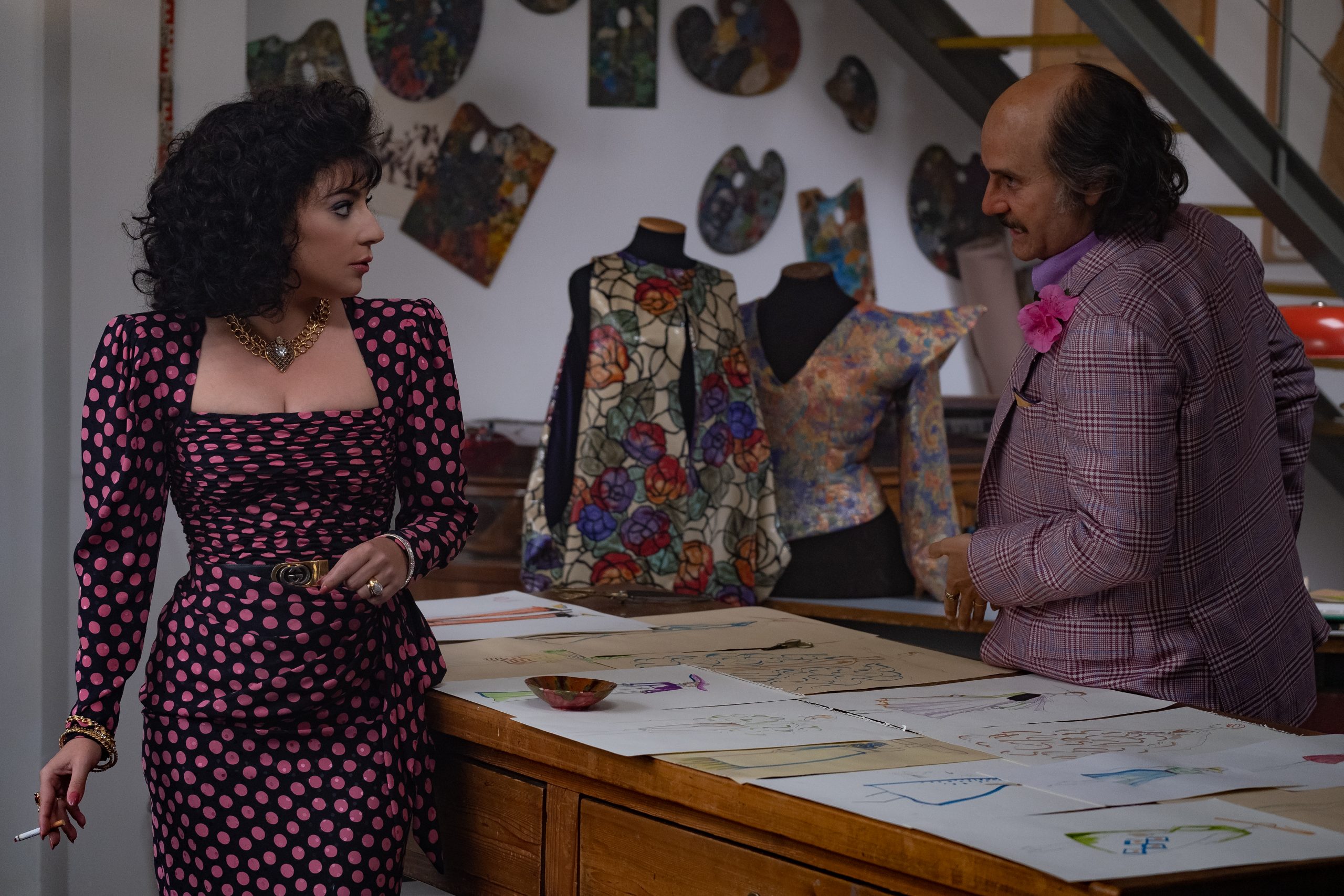 Lady Gaga and Jared Leto in House of Gucci // Esquire

House of Gucci is, in theory, the perfect film. It’s by one of history’s greatest directors, has an all-star ensemble, and is centered around a quintessentially cinematic premise, dripping in glamour, money, fashion, sex, lust, envy, betrayal, conspiracy, and murder. And yet, setting aside the weight of those expectations, an honest audience member must acknowledge they are sat before a mess; a film that is, eminently, anything but perfect.

At its heart is a story classic and tragic. Our protagonist is the commoner Patrizia Reggiani; a truck magnate’s daughter who marries a veritable prince, Maurizio of the Gucci family (as played by Adam Driver), and travels to the world of riches and glamour. But, eventually, he ranks family above wife and throws her into exile–and from her Elba, she wreaks her revenge.

Patrizia is played by Lady Gaga, and those worried that A Star Is Born was a fluke should be reassured. She’s a born movie star, making Patrizia as a ravenous nymph, whose diminutive frame hides her appetite for power. She’s a fun, sexy character, and Gaga seduces the audience just as successfully as she does Driver’s Maurizio, and whether it’s a hilariously intense extended sex scene in a truck-yard, or Gaga extending her leg in their sports car before an oral forage, these moments shiver with electricity. They’re funny, engaging, and surprisingly deep, for you’re always wondering whether this is purely a cynical manipulation through sex, or she’s sincerely enthralled and aroused by her new-found power and glamour. In these moments, Gaga shares some of the lascivious, chaotic energy Cameron Diaz captured as Malkina in the even less coherent Ridley Scott ensemble, The Counselor.

Even so, Scott is more apathetic in 2021 than he was in 2013, and that bungle of a script was by the brilliant Cormac McCarthy. House of Gucci was written by nobodies, and they deserve to stay that way. Where Diaz’s Malkina was an enigma, Patrizia is just confused. The writers never decide whether she’s a cynical gold-digger, underappreciated achiever, or crazed wife, and try to muddle through without committing to any. This should have been a cathartic thrill ride about a proud, fashion-loving, apathetic gold-digger, hungry for power, who fucks and manipulates her way to the top, using the ignorant elite as her ladder. But it’s not that interesting, not that punk, and thus, there’s nothing even close to The Counselor’s incredible windscreen scene. It can’t even commit to making her the protagonist, tossing her into the background at the three-quarter mark to reorient on the Gucci family, and the feminist angle is even more pathetic. Throughout there are some allusions to the gender politics of the family, and how she’s slighted by the male dominant family, but even these hacks know a husband-killer who takes council from a TV-witch will never be the next Lorena Bobbitt.

It’s genuinely remarkable to consider the calibre of people who directed and acted in this film–and how much they will have been paid for it–and still have a script this bad. It’s a hustle almost as impressive as the lead characters. A dialogue-centric film requires engaging, tension-filled scenes, punctuated with uncertain pauses and dramatic reveals; this has none of that. The few memorable lines are as often down to cringe as wit, and for two and a half hours, there isn’t a single truly great scene. People talk, dramatic reactions punctuate, voices shout, hands gestate, the story inches forward, a few cliches are sprinkled in and, Bravo!, we’re onto the next scene. And so it repeats, until the film blurs into smog. But look how daring we are showing a character pissing on a family symbol! And this guy threw a plate! Aren’t we bold?!

This leads to an over-stuffed script staying that way, and a cast who have to ham up every scene to milk some life out of the script. This isn’t to say they’re all bad. Aside from Gaga, Driver is typically compelling as the passive Maurizio Gucci (though given significantly less to do than in his other 2021 roles, in The Last Duel, and, ironically, as a wife-murdering comedian in Leos Carax’s Annette). But even he is pushed to react more, “act” more, be louder, and doing so only makes the dialogue even less bearable.

The greatest, tragic irony of the film is that its weakest link is also its best component, namely, its director Ridley Scott. Some wish to ascribe the failure of this film to the declining quality of directors as they age, but anyone who saw his other 2021 release, The Last Duel, will know this simply isn’t true. Blending Rashomon, #MeToo, and the ‘true story’ of France’s last duel to the death, it’s a brutal, cynical masterpiece–precisely because the material matches his blunt, serious aesthetic. Brutal death, rape, and medieval violence is far better aligned with that than sequins and family drama.

Think of Sophia Coppola’s sorely underappreciated The Bling Ring or Nicolas Winding Refn’s fashion satire The Neon Demon. These are films that love the color, status, glamour, and materialist pettiness of their worlds, precisely because their directors do too. Scott isn’t a stylist. He doesn’t like flash and glamour in his directing, so why would he in clothing, or architecture, or relationships? Ironically, his only aesthetic fingerprint is his frosty, desaturated color-grading with a blue-tinted white-balance, which totally contradicts with displaying affluence, lush buildings, and bright costumes. This also affected his otherwise commendable All The Money in the World. You could never really feel the Getty’s money through Scott’s blue veil. But there, the brutality of the kidnapping and general period look made this largely unimportant. House of Gucci doesn’t have that defense – everything is in a world of glamour. It would be bad enough if this dampening pallor was cast over every scene, but they clearly realized in the edit that some scenes just couldn’t work with it, grading them back to the default, and thus cutting back-to-back scenes with notable, clashing changes in white-balance.

Towards the end of the film, two characters make brief, cameo appearances, and ironically highlight how much potential has been squandered here; namely, Tom Ford and Gianni Versace. The former has become a great director in his own right, showing how to make beautiful, passionate films without devolving into melodrama; and the latter’s death became the heart of a magnificent mini-series, The Assassination of Gianni Versace.

The latter also about the fashion world, also has lots of period costumes, also considers class and wealth, and shares the same basic story of an outsider who seduces their way to glamour and money, only to be spurned and inflict vengeance upon his rejectors. The difference is that the FX series is a masterpiece. In part that’s because its creators clearly care about this world, conveying their love for its pomp and glamour, but there’s also something about narrative, and its themes, that works better from a gay perspective. Stripped of gender dynamics and the tensions and differences between men and women, the nature of the desire is clearer; namely, the longing for their clothes, their jewelry, their money, their fame, and their attraction, and hating them for having that when you don’t. At the core is a desire to be who they are, an egoism that fuels a belief that you deserve to have what they do, and self-hatred for not; and that’s reflected in much of homosexual desire generally, be it written by Daniel Mendelsohn in The Elusive Embrace or Troye Sivan in “STUD.” It’s not incidental that the first–and definitive–on-screen depiction of this, All About Eve, is inherently homoerotic.

This isn’t to say House of Gucci should have been a gender-swapped version or something like that; though, in his searing review, Tom Ford alludes to a possible homo or bisexuality to Maurizio, which would have been an interesting addition. It’s to say that gender dynamics cannot be erased and ignored, and inherently complexify this narrative, and to handle that, you need great discipline, and a real investment in the world. The writers, editors, and director of this film had none of that.

It’s not a terrible film–it couldn’t be with so much potential, and costumes this stunning–but it’s unequivocally a mess of tone, of direction, of aesthetic, and of purpose. It’s melodramatic when it wishes to be serious, over-acted when it wants an Oscar, dour when it needs to be glamorous, and wearisome when it should be engaging, directed by someone constitutionally incompatible with the material, and written by the chimps.

As I say, in theory, this is the perfect film. We know that because the perfect version already exists, in The Assassination of Gianni Versace. This isn’t it.

‘Sex and the City’ reboot proves wokeness is anti-art