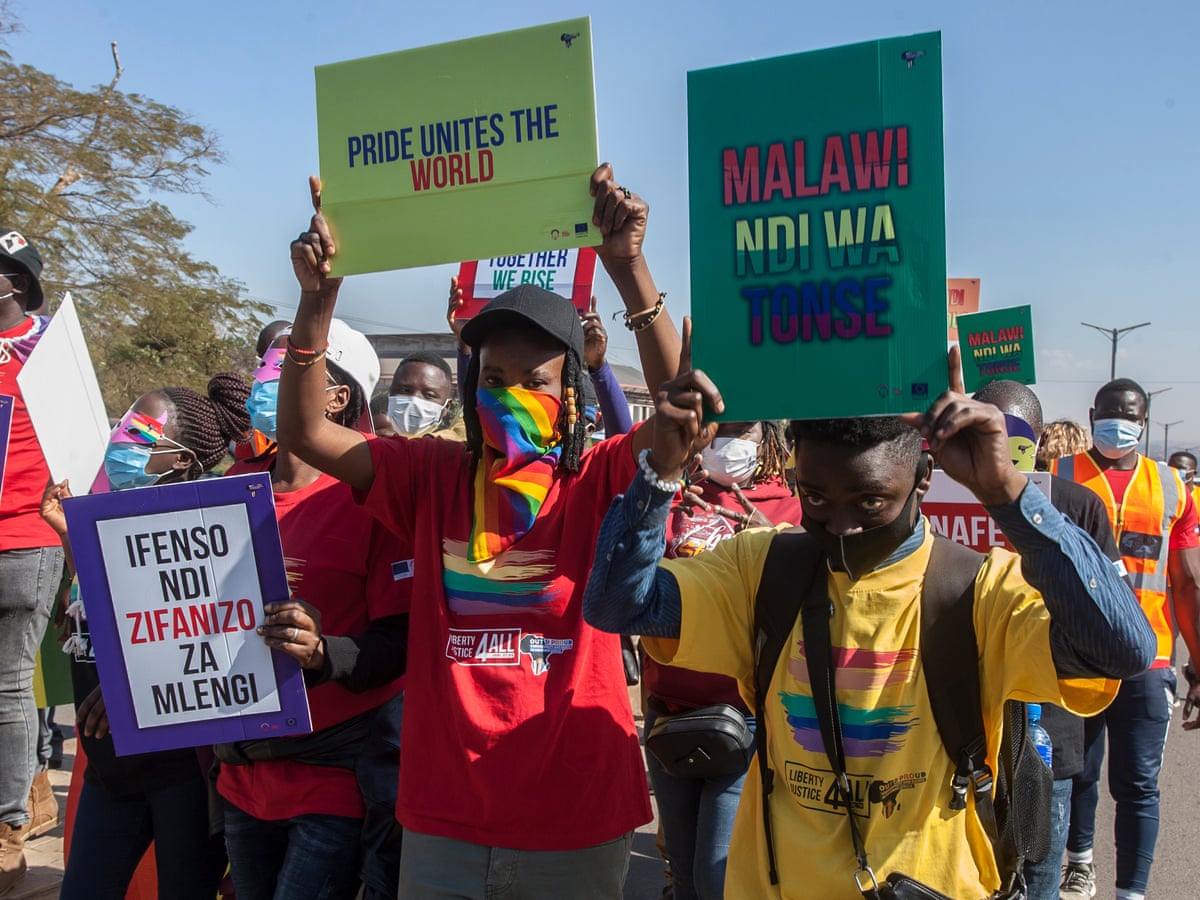 The first ever LGBT Pride parade was celebrated last weekend in Malawi, a country in southern Africa where homosexuality is still illegal.

The march was organized by Nyasa Rainbow Alliance in the capital city of Lilongwe. Malawi 24 posted a photograph to Twitter showing marchers carrying a banner that nodded to American ideals, reading “Liberty, Justice 4 All.”

The news outlet tweeted, “Breaking: Malawi hosts first ever gay parade. The parade is currently underway in Lilongwe. The first gay couple that openly came out was sentenced to 14 years.”

Homosexuality has long been illegal in the African nation but in 2009 a young, engaged couple became the first people sentenced under the law. Malawi 24 reported, “The couple, Steven Monjeza, 26, and Tiwonge Chimbalanga, 20, were arrested in December 2009 after celebrating their engagement ahead of a wedding planned for 2010.”

According to Human Rights Watch, the two men “were arrested and charged with ‘unnatural offenses’ and ‘indecent practices between males’ under sections 153 and 156 of Malawi’s Criminal Code.” The judge who decided the couple’s fate claimed their acts were “against the order of nature” and aimed to make an example of the couple by handing down the maximum punishment of 14 years prison time with hard labor. HRW stated the punishment was “one of the longest sentences for consensual same-sex conduct anywhere in the world in recent memory.”

Malawi’s president at the time, Bingu wa Mutharika, pardoned the couple, and since then many of the country’s leaders have been working to change the laws. Mutharika’s successor, Joyce Banda, pledged to decriminalize homosexuality in the country and enacted a moratorium on the enforcement of the anti-gay laws. However, a court decision suspended that moratorium.

The Nyasa Rainbow Alliance is an organization of over 300 citizens of Malawi fighting for human rights in the country. The group “was established in 2014 to increase the scope of the existing LGBT+ organizational landscape and address some of the gaps identified by the members of the LGBT+ community themselves,” according to their website.

During the weekend’s Pride march, members of the Nyasa Rainbow Alliance and other attendees approached the governmental offices in the capital city and delivered a petition demanding the Malawi government recognize and protect the rights of its LGBT citizens.

Hudson Kuphanga, Principal Administrative Officer for Lilongwe City Council, received the petition and vowed that it would be delivered to the president of Malawi and the cabinet. According to Malawi 24, the petition was also addressed to the Ministry of Justice, the UN resident Coordinator, and the Malawi Human Rights Commission.

The Malawi Human Rights Commission also tweeted about the parade saying, “First gay parade in Lilongwe. We will monitor the parade.”

According to a report in the Guardian, most of the parade-goers wore masks while marching in the street. The masks were not due to fears of the pandemic, but instead to hide the marchers’ faces and identities.

The small country of Malawi was included in the Trump administration’s campaign, launched in 2019, to decriminalize homosexuality across the globe.

It seems the U.S. has worked very little to garner a relationship with the country. However, the Trump administration helped bridge that gap. In 2018, Melania Trump was the first U.S. First Lady to ever visit the country. Her visit centered around education and the betterment of the children of Malawi.

Melania Trump said during her visit, “The growth and success of a country starts with educating our children.” She continued, “The positivity and passion to learn was so evident in each classroom, and I appreciate the time everyone took to show me around the school.”

Proposed law in Ghana will imprison LGBT activists for 10 years