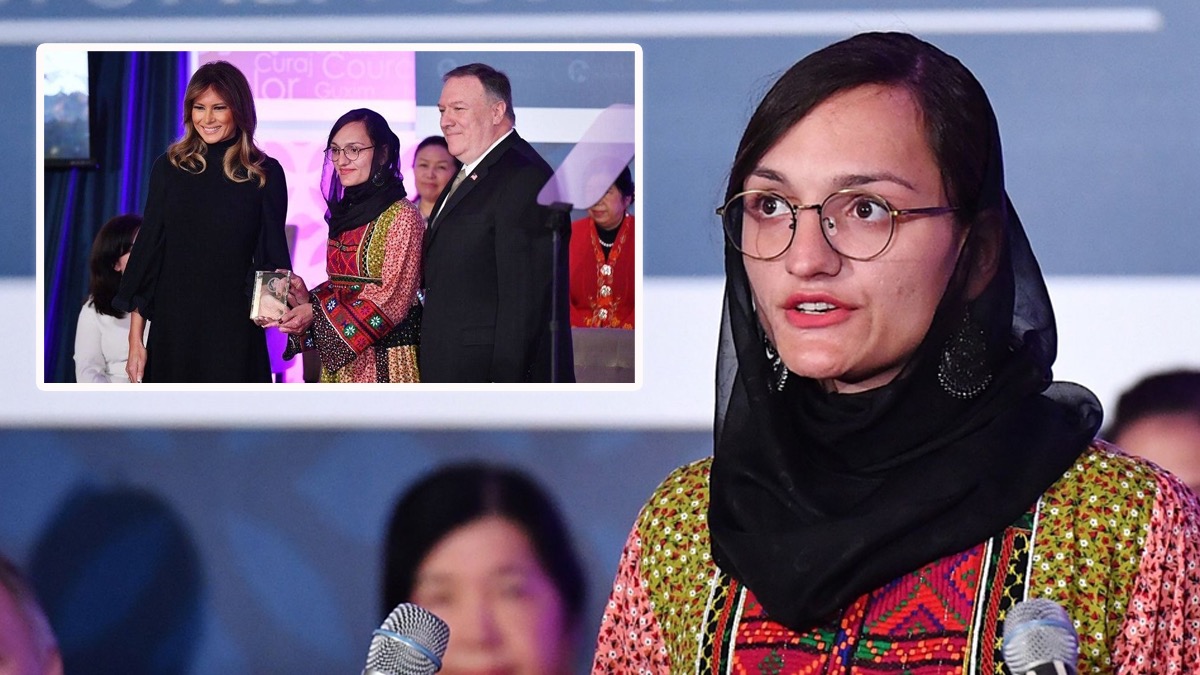 Zarifa Ghafari in 2020 at the US State Department

Now that the Taliban has regained control of Afghanistan, the country’s youngest and first female mayor waits with her family for death.

The New York Post reports Zarifa Ghafari, the 27-year-old leader of the city of Maidan Sharh in central Afghanistan, says she has nowhere to go, and even if she did, she refuses to leave her family behind.

“I’m sitting here waiting for them to come. There is no one to help me or my family,” she said.
“I’m just sitting with them and my husband. And they will come for people like me and kill me. I can’t leave my family. And anyway, where would I go?”

The young woman was elected to her position in 2018. Her father was executed last November and she has survived multiple attempts on her life from the Taliban. Despite all this, and knowledge that the Taliban was gaining power in the region, just a few weeks ago Ghafari claimed she was optimistic for the future of her country.

“Younger people are aware of what’s happening. They have social media. They communicate. I think they will continue fighting for progress and our rights. I think there is a future for this country,” she stated.

In March 2020, Ghafari was an awardee at the US State Department’s International Women of Courage Awards, where she was honored by then-First Lady Melania Trump and Secretary of State Mike Pompeo.

“Women of my generation have not forgotten the reign of the Taliban and we are as always worried for the future,” Ghafari said at the ceremony. “Therefore, let me ask for your continued support to ensure that Afghan peace process does not erase the gains that have been made since the dark days of the Taliban regime.”

Trump said she was moved by women like Ghafari. “I continue to be inspired by the personal stories that accompany each of these extraordinary women,” the First Lady said during opening remarks. “Courage is something that is not easily taught and is closely tied with bravery, humility and sacrifice.”

Ghafari’s buoyancy took a drastic turn over the last week as the Taliban raged through the country finally sweeping into the capital city of Kabul over the weekend forcing President Ashraf Ghani to flee the country.

Over the last 48 hours, horrifying scenes of people trying to flee have surfaced. Afghani citizens were shown clinging to the outside of a United States aircraft only to fall to their deaths as the plane took off.

All of this has sparked protests from Afghani Americans. Demonstrators gathered outside the White House with many blaming the Biden administration for the chaos and calling for international support.

One woman tearfully told Fox News that she feared for her lives of her family. “My family is there. All my people is there. They’re killing all my people,” she said.

Others spoke of their fear for women, like Ghafari, and especially young girls who are left behind in the country as many of them were not alive when the Taliban was last in power. “Our girls. The girls who are under 20 don’t know what life is like under Taliban. Their lives are all destroyed. They’re all destroyed,” one person said.

Other protestors expressed their anger towards President Biden for his handling of the pullout of US troops in the region. “We’re all incredibly disappointed in President Biden and the administration for pulling out all the troops from Afghanistan literally overnight,” one woman proclaimed.

Even more went on to suggest that all of the work and lives lost due to the fighting in Afghanistan were for nought. “It’s all gone back. I feel like it was for nothing,” one woman told Fox News. A man further added, “It’s back to where it was in 1994.”

In a speech on Monday, Biden denied any responsibility in the crisis and defended his actions. He instead shifted blame to the Afghani army’s unwillingness to fight and the political leaders who fled the country.

In response to the speech, former CIA analyst and army veteran Matt Zeller said he was “appalled” by the “profound bold-faced lie” in Biden’s speech. “I have been personally trying to tell this administration since it took office. I have been trying to tell our government for years this was coming. We sent them plan after plan on how to evacuate these people. Nobody listened to us,” Zeller said.

Zeller also resented the blame being put on the Afghani army. He contends that the country’s soldiers were doing the best they could but were ill-equipped for the job. “When you’re not getting paid on a regular basis, when you’re not getting fuel, when no one is supplying you with ammunition, and yet you’re still showing up to the fight, how dare us for having to blame these people for not having the audacity to survive a Taliban onslaught,” he stated.