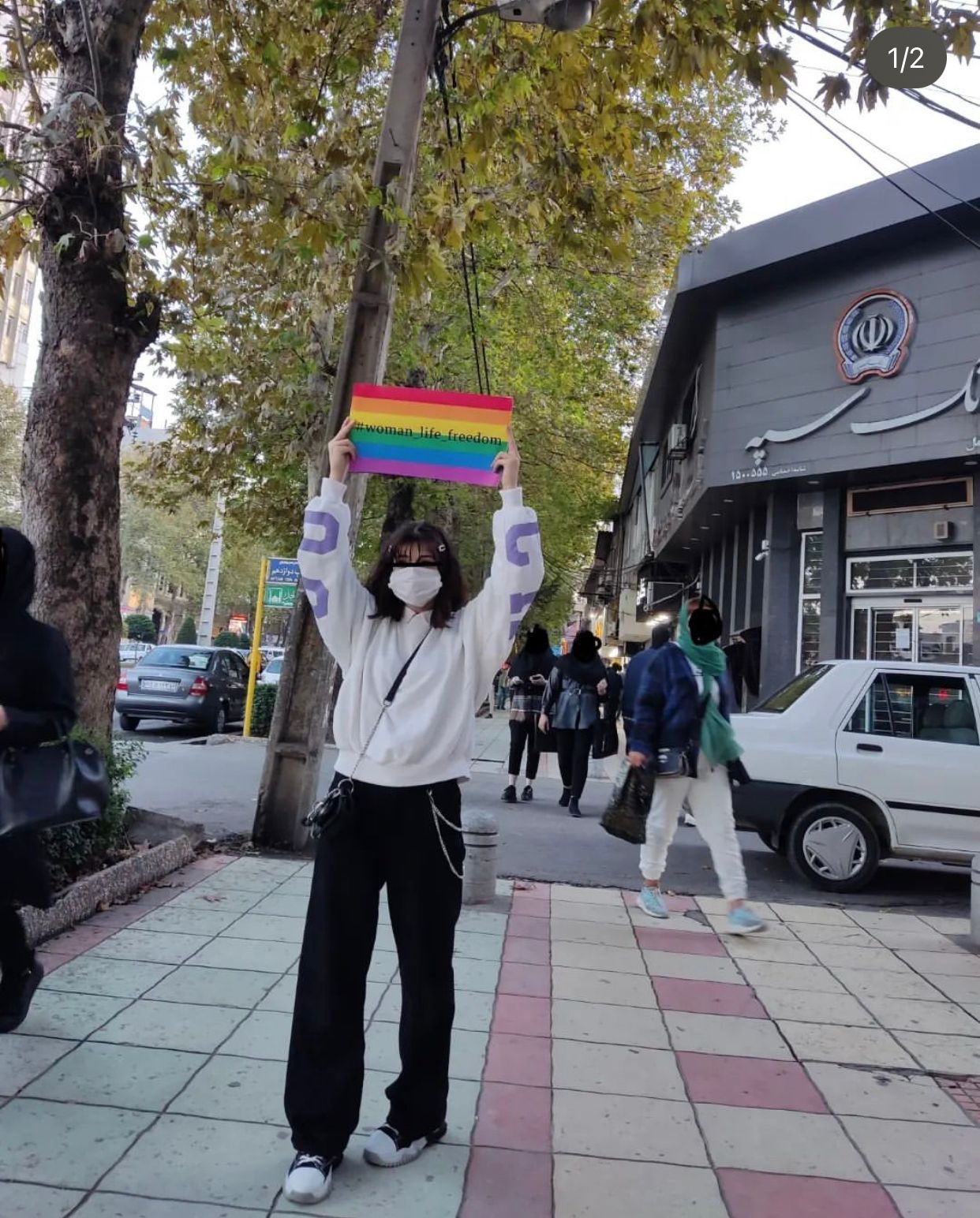 The following article originally appeared on Outspoken Middle East and has been translated from Farsi.

Over the last week, footage has emerged online from across Iran showing protesters raising rainbow flags. In a swift propaganda campaign, the Islamic regime has used state media platforms to claim that the photos were fraudulent and that no such protests happened in Iran. In response to the propaganda, several pictures of LGBT couples kissing in the streets have surfaced.

Sam, one of the protesters in Tehran and a member of Iran’s LGBT community, spoke out about their cause. “You say goodbye to your family, knowing you might never return. It sounds scary, but it also encourages us to risk more,” Sam told Outspoken Middle East. “My friends and I used to go to the streets chanting ‘Woman, life, freedom!’ at the beginning, but very soon we felt welcomed enough to come out as gay protestors and chant ‘Gay, life, freedom!’” the 24-year-old gay man added.

Sam has been waving a rainbow flag in the streets of Tehran almost daily. “You may ask where we found rainbow flags in Iran. We sew them ourselves. Sometimes the reaction on security forces’ faces is hilarious. They are also shocked. Maybe they think the flag represents a country! Many of them still don’t know what the flag means. Still, many also know.”

Sam described reactions from other protesters as “unbelievably warm.” He said, “It is stressful because you never know whether the person standing next to you is a spy or plainclothes. And it is hopeful because you can see that your voice is finally being heard, and many protestors welcome you with warmth and open arms. It is unbelievable. We were chanting ‘Gay, life, freedom!’, and I heard another group answer us back ‘Trans, life, freedom!’ It’s amazing.”

Due to the Islamic regime’s control over the Internet, it is difficult and not always possible for news of these protests to reach international media sources. However, Sam claimed that the streets themselves are “media platforms.” “At the beginning of the protests, we were very hopeful that we get support from the international community, specifically from the United States. But three months in, we’ve not seen any meaningful reaction from Biden’s administration. I can see why Biden is disappointed. Human rights have never been on his agenda. He was too keen to make a deal with mullahs. Women and gay rights are too sensitive for his agenda,” Sam said in disappointment of President Biden.

According to Iranian human rights groups, since the beginning of the protests in September 2022, at least 416 people have been killed, including 51 young children. However, Iranian human rights activists say the actual death toll is higher due to the difficulty of counting casualties outside the country. The Iranian regime denies killing anyone, claiming instead that either security forces or by terrorist groups like ISIS are responsible. ISIS has rejected the Iranian regime’s claims.

Sam explained that the atmosphere is “quite violent and yet exciting.” He said, “We are hopeful this time and hope that a fundamental change is just around the corner. If you want to see real diversity, you have to come and see the protests. You could see people from different ethnicities, religious backgrounds, and [sexualities] (LGBT). The most important fact about these rounds of protests is that nobody hides their identity, their real selves. If you are a gay man or Muslim but are against the regime, you feel welcome to join the protests. I don’t think people are willing to give up this time. Even outside of the protests, you see more real people in the streets in daily life—more women without headscarves, LGBT people with rainbow signs or rainbow shirts walking in the streets… Or even people with a cross neckless showing their belief in Christianity. This is a considerable achievement. Drivers in the street honk whenever they see a woman without a mandatory headscarf. This is a significant achievement. We are united more than ever.”

Protests have not only been limited to the streets. Students have also been protesting almost every day at universities across Iran. Several videos and photos showing rainbow flags and other LGBT paraphernalia used in university protests. “Students are taking a higher risk,” Sam said. “Universities are close environments, and everyone knows everyone. This means LGBT students feel safe enough to come out as homosexuals to their classmates. It’s huge.” He added.

In ruminating on the future, Sam commented, “Somewhere, for this to end, we need to do something. We should accept the dangers. If we want to achieve something, we know that we will also give something for it, sometimes with our lives.” With a final word for Joe Biden, he added, “Iran is a 5000-year-old nation. We saw many enemies and friends. We will win this battle but will never forget Jimmy Carter supported Mullah’s revolution in 1979, and Joe Biden tried his best to keep them in power. Democrats are not Democrats. They are worse than Mullahs and the Taliban, their friends.”

Inside an underground gay party at Qatar’s World Cup

Taliban brutally murdered gay medical student, then sent the video to his family