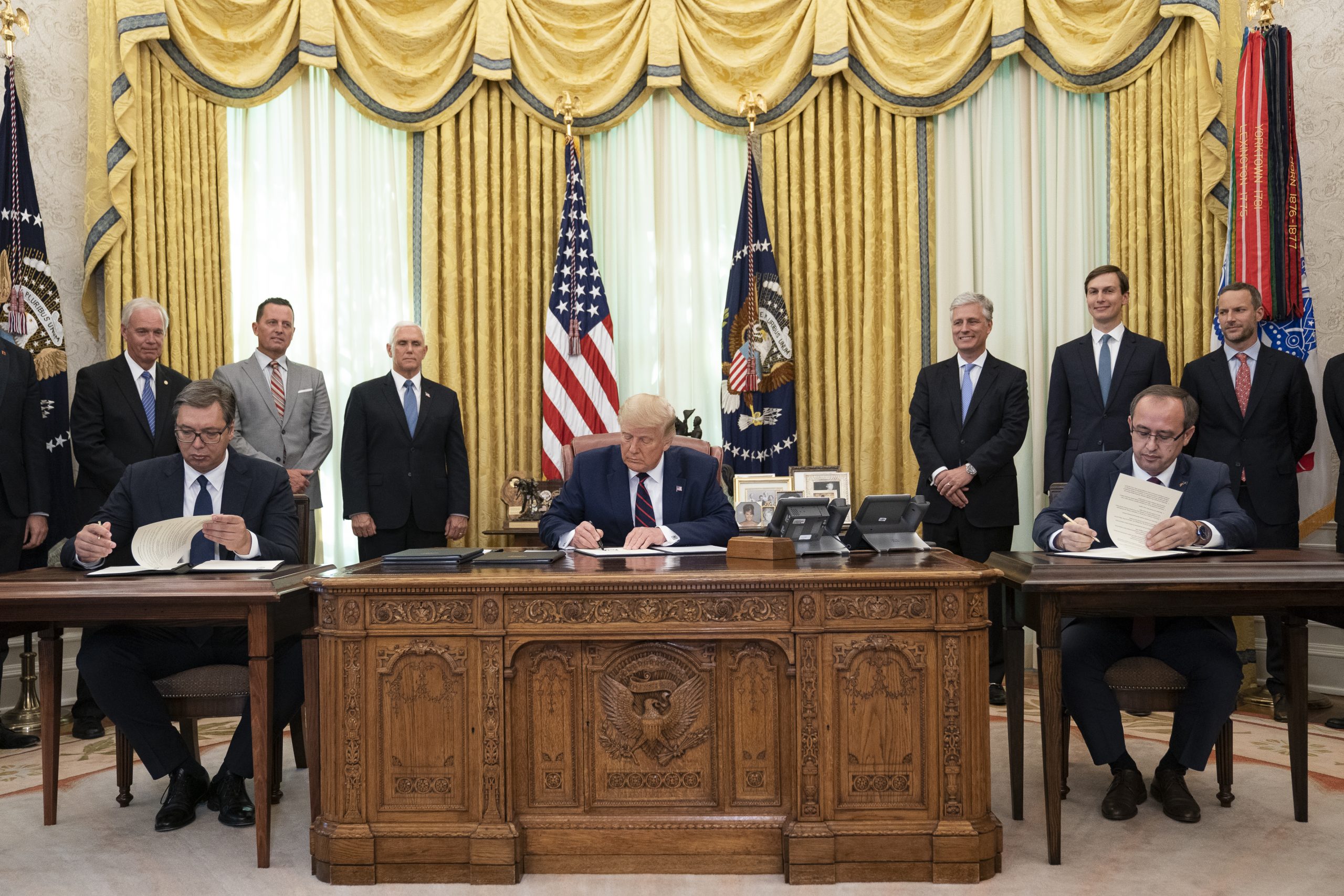 On Friday, Special Presidential Envoy Richard Grenell went viral after schooling a reporter on a bit of recent history of the Balkans. At a White House press conference announcing an unprecedented agreement brokered by the Trump administration between Serbia and Kosovo, a young reporter attempted to change the subject when asking a question.

“I’m just going to talk about Kosovo and Serbia. I don’t know if you can find it on a map,” Grenell said. “You might be too young to understand what this issue is about. Maybe the older journalists should step up and say, ‘this is a big deal. This is a big issue.'”

OUTspoken has put together a refresher course for journalists who may need one on the history of the conflict and the importance the Trump administration’s deal.

Kosovo is a Muslim-majority disputed territory and partially-recognized state in southeastern Europe. Neighboring Serbia has long claimed Kosovo is part of its territory, which it lost to the Ottoman Turks in the Middle Ages. Following World War I and the breakup of the Ottoman Empire, the republic of Yugoslavia was formed, which encompassed both Serbia and Kosovo and several other territories in the region. While Serbia governed Kosovo during much of this time, the two factions existed mostly in peace. That changed in 1989 when Yugoslavia, a Soviet-satellite nation, dissolved and violence broke out as regions began declaring independence. The Serbian special police were sent to fight the Kosovo Liberation Army which resulted in years of struggle and mass deaths on both sides. In 1998, the UN banned arms sales to Serbia and demanded a cease fire.

Spearheaded by the Clinton administration, beginning in March 1999 NATO bombed Serbia for 78 straight days, killing an estimated 2,500 people, including 1,500 Serb civilians, and injuring 12,500 more. The Clinton administration alleged Serbia was committing ethnic genocide in the region and the strike was intended to help ethnic Albanians seize control of Kosovo. That year, Clinton deemed the Kosovo Liberation Army to be “freedom fighters,” but the previous year the State Department condemned “terrorist actions” by the KLA. The Clinton administration was also aware the KLA was heavily involved in drug trafficking and had close to ties to Osama bin Laden, according to author Jim Bovard.  The bombing campaign largely was seen by critics as a wag the dog operation from President Clinton intended to distract from his impeachment hearings that began three months earlier.

In the summer of 1999, Hillary Clinton said to an interviewer, “I urged [President Clinton] to bomb. You cannot let this go on at the end of a century that has seen the major holocaust of our time. What do we have NATO for if not to defend our way of life?” A biography of Hillary Clinton, written by Gail Sheehy and published in late 1999, stated that Mrs. Clinton had refused to talk to the president for eight months after the Monica Lewinsky scandal broke. She resumed talking to her husband only when she phoned him and urged him in the strongest terms to begin bombing Serbia; the president began bombing within 24 hours, according to the Los Angeles Times.

According to British professor Philip Hammond, the prolonged NATO strike “was not a purely military operation: NATO also destroyed what it called ‘dual-use’ targets, such as factories, city bridges, and even the main television building in downtown Belgrade, in an attempt to terrorize the country into surrender.”

In March 2000, the fighting resumed when the KLA launched attacks into Serbia. UN Human Rights Envoy Jiri Dienstbier reported that “the [NATO] bombing hasn’t solved any problems. It only multiplied the existing problems and created new ones. The Yugoslav economy was destroyed. Kosovo is destroyed. There are hundreds of thousands of people unemployed now.”

In 2008, Kosovo’s parliament declared independence from Serbia, but tensions continued.

On Friday President Aleksandar Vučić of Serbia and Prime Minister Avdullah Hoti of Kosovo met in the Oval Office with President Trump to sign a new agreement to normalize economic ties. Both parties have agreed to build a railway and a roadway to link between their capitals, Belgrade and Pristina, as well as establish air travel. The parties will also work with the U.S. International Development Finance Corporation and Export-Import Bank to help support these projects. This project will allow a more free and efficient way for people and goods to transfer across the border of Serbia and Kosovo. As for crossing the border itself, both parties have agreed to open the Merdare Common Crossing Point facility. This will allow people from each country to live, work, trade, and study in each other’s neighborhoods, companies, and universities.

The deal also ensures diplomas and degrees will now be recognized across borders. Kosovo and Serbia also agreed to find and identify people who went missing throughout the war. At the urging of the U.S. government, both leaders have also agreed to bring new freedoms to their lands including freedom of religion and the decriminalization of homosexuality.

In October 2019, Grenell travel to the capitals of both the Balkan rivals to meet with their leaders. The deal signed Friday was preceded by three separate agreements in the last year brokered by the White House. For over 21 years, “the politics were stuck, we’ve been talking about the same thing for decades,” Grenell told reporters at a press conference on Friday.

The administration’s approach is economic, which Grenell says both sides were eager to engage in. It is also beneficial to American and European companies, since the region has been largely locked out of the global economy because of the perceived conflicts.

“The people of Serbia and the people of Kosovo are ecstatic about this agreement,” Grenell told reporters, “and very thankful there was an outside administration to look at this situation and not do the typical political thing. If we had done the typical political thing and listened to all the really smart people at NGOs and think tanks here in Washington, D.C. we would not have had this agreement.”

At the signing ceremony, Vučić thanked Trump for engaging the countries and noted they will still have political differences, but “this is a huge step forward and I’m once again profoundly grateful to you [Trump] and to your people that successfully got us here.”

“I think we made a huge step forward toward full normalization of relations,” Hoti added.

These hairdressers have a message for Nancy Pelosi