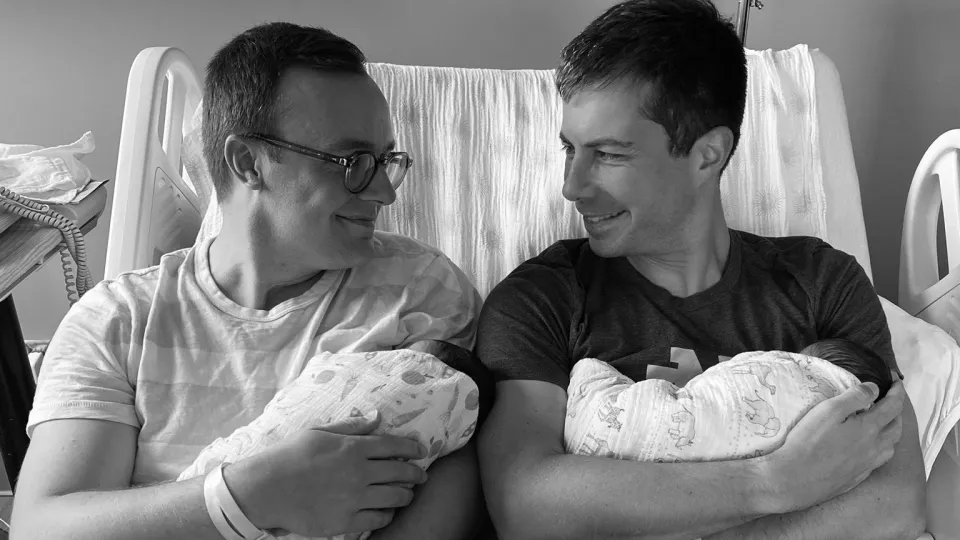 The token gay of the Biden Administration, Secretary of Transportation Pete Buttigieg, released a curiously timed blog post on Medium detailing the alleged facts of the birth and adoption of his twins. In the post, he reveals that the children were the product of a spontaneous adoption, and not surrogacy. He writes, “It was what they call a ‘surprise’ adoption scenario — a mother had given birth that day and wanted to arrange adoption.”

The nature of the children’s conception and birth was a topic of much discussion when the news of the Buttigieg kids was first announced, and one that was unanswered by Buttigieg at the time. Why make these revelations now, a year after the fact? As the failed 2020 presidential candidate clearly has his eye on the White House again, the timing of the bid for attention and setting the record straight starts to make more sense.

In the post, Buttigieg also details the health scare that the children went through as they were in the hospital for quite some time. It must be made clear that the criticism of Buttigieg is not surrounding his and Chasten’s wish to be fathers or the children’s health. I and so many others on the right wish them all health and happiness. It is a relief that the children are now safe and healthy.

Instead, observers’ criticism stems from the fact that Pete Buttigieg is wholly inexperienced and ill-equipped to do the job he has accepted. The transportation and supply chain in this country is and has been in shambles since he became one of Biden’s diversity hires. To this day, with the unprecedented numbers of airline flights being cancelled and the supply chain issues still not adequately addressed, there is not a single American who has not felt the effects of Buttigieg’s failures.

At the time of the twins’ birth, Buttigieg received criticism for accepting a job of national importance while he anticipated becoming a new father. It was assumed by many that his children were the result of IVF and surrogacy. Since the children were born in August of 2021, they would have been conceived in late November or early December of 2020. Buttigieg was nominated in December of 2020 and confirmed by the Senate in February 2021. If the children had been planned, the criticism of his accepting a job knowing children were on the way is valid. At the time, he did not respond to the commentary. One would think that if he could have set the record straight and exonerate himself from the legitimate questions raised, he would have immediately done so. Instead, he waits until midterm election season is in full-swing, which is conveniently right before presidential candidates would typically announce their intentions of running.

Furthermore, the post was meant to elicit sympathy from the reader and paint Pete in a devoted fatherly light, the exact kind of depiction a presidential hopeful seeks. Naturally, Pete took the byline, acknowledging his husband’s input in a throwaway note that reads, “Note: This piece is in my voice, but Chasten and I worked on this together and I’m thankful for his help.”

But there is also good reason to think that Pete’s claims of a surprise adoption are not truthful. A year ago, when the two new fathers remained tight-lipped about the truth of surrogacy versus adoption, the president of the Center for Bioethics and Culture and ex-pediatric critical care nurse Jennifer Lahl was convinced surrogacy was the answer mostly due to the fact that the birth centered around twins.

Lahl did not include in her argument that the chances of having twins or multiple births increases triply or quadruply with IVF and surrogacy. According to Dr. Carolyn Kay, M.D., “The rate of twin pregnancies with IVF with fresh embryos is 12.1 percent for women under age 35 and 9.1 percent for women ages 35 to 37.”

Furthermore, adoption of twins to the same family is not very common either. According to the firm Mills Adoption Law, the law will consider the well being of each child separately and treat each as an individual, and if there is a special need, like a medical issue, the likelihood of the law allowing both twins to go to a single family falls even more. Furthermore, the firm claims that a “very small percent of children waiting for adoptions are twins.” They further write, “If you want to adopt twins, you must be prepared for the fact that you may have a long wait to find an adoptive match.” If there are people waiting countless years for the opportunity to adopt twins, how is it that Pete and Chasten were bestowed with such a stoke of luck, especially if both children were born with known health issues.

The notion that the “surprise” adoption of medically-compromised, naturally-born twins happened with no warning and was not planned just does not seem plausible. Chasten endorsing a Trump-DeSantis 2024 ticket would be more plausible at this point. Pete has the Oval Office gleaming in his eye, and he knows he cannot run on a record of thousands of canceled airline flights, empty shelves, and crumbling infrastructure. So he’s smartly pulling at the heartstrings of parents selling them a line of bullshit in hopes of making him seem more relatable to the average straight and moderate American.

Make way for President Pete! Buttigieg ‘priming himself’ to replace bumbling Biden in 2024