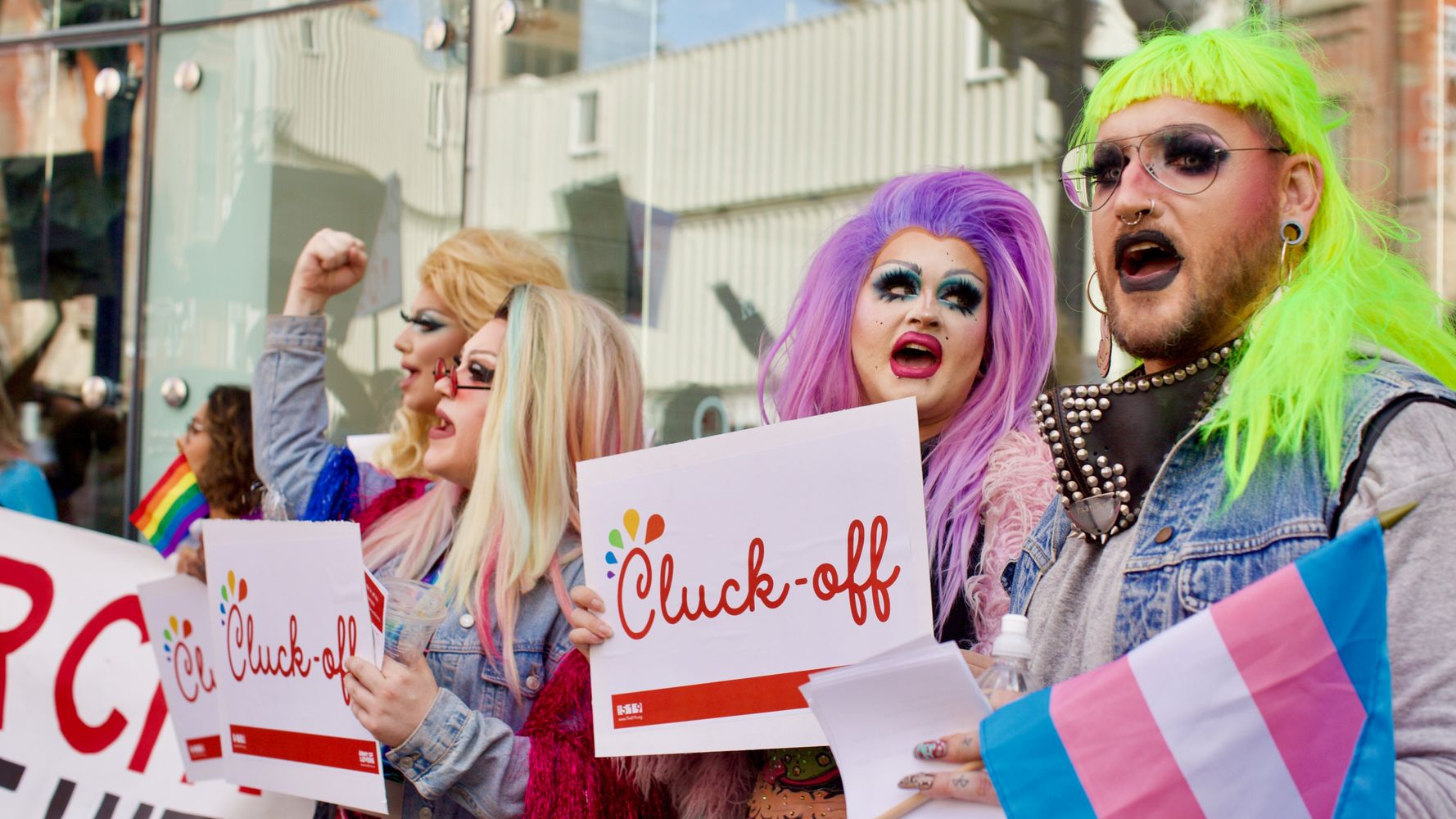 For most of the past ten years, Chick-fil-A has been the target of boycotts and protests over its perceived anti-gay positions. Last week, some New York State Democrat lawmakers took steps to block Chick-fil-A from providing food vending services for state highway vehicle rest stops. This follows similar controversies in recent years in San Antonio, Buffalo, and the UK.

They accuse Chick-fil-A of having “a long and sorry past of supporting discrimination toward LGBTQ+ individuals and their families.” As evidence for their claims, they point to Chick-fil-A’s now-stopped financial support of the Salvation Army, an evangelical Christian charity providing poor people with food, clothing, housing, and other life-essential services.

One might wonder what could be wrong with a fried chicken restaurant donating money to charity. The LGBTQ+ activists criticizing Chick-fil-A today are doing a lot more than simply complaining about the company’s perceived views on homosexuality.

“Every great cause begins as a movement, becomes a business and eventually degenerates into a racket,” the American philosopher Eric Hoffer once said.

Queer, Inc.–the conglomerate of LGBTQ+ identity groups that evolved after the successes of the gay and lesbian rights movement – needs a fundraising villain. Who better to choose than a Christian-owned, Southern, proudly patriotic fast food company? You will not find many evangelical Christians or proudly patriotic staffers working at these self-described “queer” organizations, a word many homosexuals consider a slur.

Chick-fil-A was founded in 1946 by Truett Cathy, a devout Southern Baptist. The first restaurant was in College Park, Ga. and the company today has more than 2,672 locations across 47 states, the District of Columbia, and Canada.

Chick-fil-A closes on Sundays, to honor the Sabbath, and on Thanksgiving and Christmas, as well. One would think the Left would applaud a US company forsaking capitalist gain for a worker benefit like guaranteed weekend and holiday rest days. One would think.

This brouhaha first erupted in 2012, after then Chick-fil-A CEO Dan T. Cathy, founder Truett Cathy’s son, publicly came out against same-sex marriage. Thereafter it got out that Chick-fil-A provided financial support to some faith-based charitable organizations who condemned homosexuality and abortion. A public outrage ensued, with the Left boycotting and the Evangelical community launching a counter-effort in support.

The controversy intensified after Chick-fil-A issued a July 2012 statement, conceding to the protests, saying “Going forward, our intent is to leave the policy debate over same-sex marriage to the government and political arena.” Subsequent years’ tax filings, however, evidenced their continued financial support for groups like the Fellowship of Christian Athletes and the Paul Anderson Youth Home in Vidalia, Ga.

The mission of the Fellowship of Christian Athletes is “to lead every coach and athlete into a growing relationship with Jesus Christ and his Church.” The Paul Anderson Youth Home helps troubled young men between the ages of 16-21 “providing a Christian home environment in which they can rebuild their broken lives through a process of recovery, restoration, and redemption.”

These charity organizations are offensive to the Left because they are successfully helping make people’s lives better by using an approach not approved by the Left. Specifically, they are using the teachings of Jesus Christ and the Christian Bible to formulate programs to help others in need. I have asked some activist friends if they disagree with anything Jesus ever said or did and they changed the subject.

Muslim charities do the same thing, providing faith-based services like the international group Islamic Relief USA. These charities are doing important work helping people in need, but Islam is not pro-gay. Leftist activists have never targeted a Muslim charity as they do Christian charities. Why?

The Salvation Army’s website has an entire page dedicated to “LGBTQ support.” “We’re motivated by the love of God to meet human needs in His name without discrimination. We embrace people regardless of race, gender, ethnicity, sexual orientation, or gender identity. Our hiring practices are open to all, and we provide the same benefits to opposite-sex and same-sex couples.”

Its website also contains video personal testimony from gay, lesbian, and transgender people praising the Salvation Army for helping them.

The National Commander of the Salvation Army, David Hudson, wrote a USA Today op-ed in November 2019 titled, “Yes we are a faith-based Charity. But we serve and love everyone.”

“Regardless of sexual orientation or gender identity, we love and welcome all – the programs we offer prove it. Hate and misinformation puts that support at risk,” Hudson wrote.

Even as they disparage the good work of Christian non-profits, LGBTQ+ groups receive large financial donations from major corporations who also donate fistfuls of cash to politicians and candidates the Left considers anti-transgender. AT&T, Verizon, Home Depot, UPS, UBS, FedEx, and Comcast are among those identified by an analysis by Popular.info.

Most of these corporations also profit from business relations with foreign dictatorships like Saudi Arabia and communist governments like China where actual oppression is the status quo. Saudi Arabia beheads gay men in public executions. None of these companies are closed on Sundays. By contrast, Chick-fil-A does not conduct business with illiberal foreign governments.

I would like to see the data on how much money these companies donated to gay rights groups back when we were actually fighting for our gay rights. But because they give Queer, Inc. money, participate in the Human Rights Campaign’s “Equality Index,” and tweet marketing images of rainbow flags every June, they get a pass whereas Chick-fil-A does not.

The activists appear as disinterested in their hypocrisy with corporate America as they do about the lives of detransitioners – a growing number of mostly lesbian and gay young people who regret becoming transgender. Many are left with permanent body-altering consequences ranging from deepened voices for females to after-effects of having breasts or testicles removed.

Reports of puberty-blockers and synthetic sex hormones being used as experimental “conversion therapy” for gay and lesbian youth ought to alarm all of us. Not unlike the experience of the Christians, however, detransitioners get from LGBTQ+ and queer groups nothing but grief. Not so long ago we would consider this homophobia, but the Left has socially reconstructed that word, too. Why don’t LGBTQ+ activists care as much for these young gay people as they do about Chick-fil-A?

After the gay rights victories, culminating with the historic Obergefell and Bostock US Supreme Court rulings–both made possible by conservative Christian Justices on the Court–the gay Left lost its way.

I was raised in a rural Southern Baptist culture in Georgia. I know firsthand the painful truth of how homosexuality became the most cursed and vile condition one could have in society once upon a time. Christianity played the pivotal role in singling out the “sin” of homosexuality for torment and scorn. Gay and lesbian people have plenty of good reasons to feel pain about that. I do. We were children once, too.

I have also witnessed a sea change in how we are treated in America and throughout the West, including by most Evangelicals. The gay rights movement worked. Gay Americans are grateful for our good fortune to live in a country where we are free. Homosexuality is still criminalized in nearly 70 countries. Meanwhile, today’s LGBTQ+ get to focus on reimagining gender identities and formulating non-binary policy. Privilege is in the eye of the beholder.

Advocacy group GLAAD issued a statement following Chick-fil-A’s 2019 decision to stop financially supporting Christian charities that help disadvantaged and poor people. “Chick-Fil-A still lacks policies to ensure safe workplaces for LGBTQ employees and should unequivocally speak out against the anti-LGBTQ reputation that their brand represents,” GLAAD concludes. Some people will not take yes for an answer.

If Chick-fil-A had a history of discriminating against gay or transgender employees or customers, my guess is the activists would have let us know. Chick-fil-A employs gay people and many others of us eat there because their fried chicken sandwich is the best and their service is A+ level good every time. Those are values we can honor and support, even if we disagree with Mr. Cathy’s religious preferences on some issues.

We need to learn to live in peace and harmony with others who see things different from us. This is the Left’s constant mantra regarding Islam, yet they refuse to apply the same rule to Christians.

LGBTQ+ fundamentalism will not work, either, nor should it.

Evangelical Christian charities like the Salvation Army should not have their funding sabotaged after they changed policies to become everything their critics had demanded, save for retaining that original sin of being Christian-based. Businesses should not be boycotted for giving money to help care for the poor, including poor gay people. It takes a special kind of selfishness and entitlement for LGBTQ+ activists to be so unappreciative of the Christians’ efforts and positive changes.

Each year I nominate the Salvation Army for an award in the name of LGBTQ+ equality. I give them a plaque that says “Thank you for helping take care of gay and trans poor people, and for the policy changes you made allowing this life-impacting work to happen. And thank you for doing all this with no financial support from us, and while we were spending our donors’ money to try to shut you down. Thank you also for following the lessons of Jesus Christ in how you dealt with our lack of gratitude, by being kind and gracious and forgiving even when we did not ask.”

Jeff Cleghorn is a past President of Georgia’s Stonewall Bar Association and served on the boards of Lambda Legal, Servicemembers Legal Defense Network, Georgia Equality, and AID Atlanta.

I used to manage male strippers. Am I allowed to be a conservative?