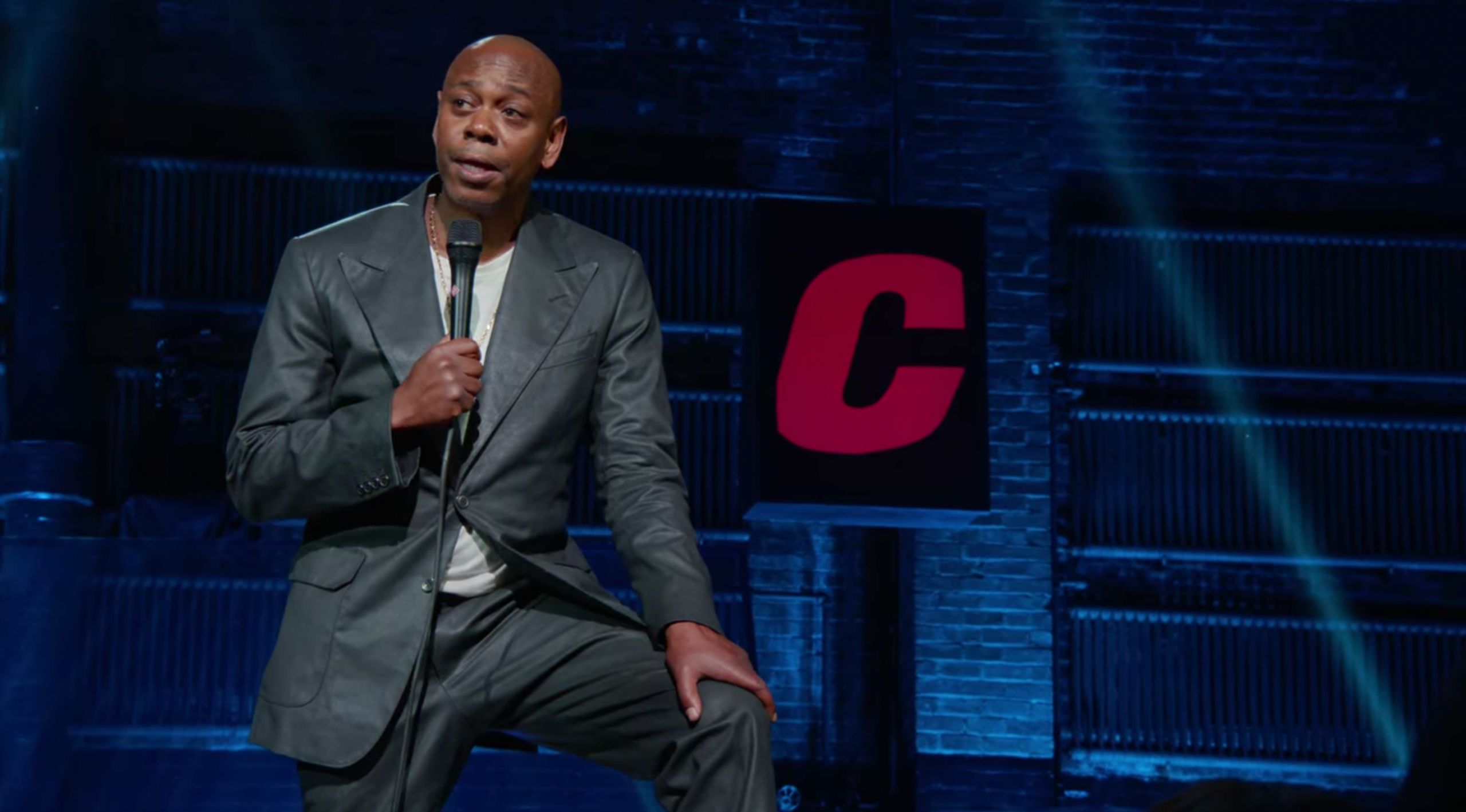 It’s odd how cultural norms change and how swiftly the scythe comes for those who don’t conform.

And so it is that Dave Chappelle – Mark Twain Prize-winning comic wunderkind, long praised for his principle, wit, and brilliant intellect –stands before the firing squad. On Tuesday, Oct. 5, Netflix released the last of his contractually obligated specials, this one titled The Closer, a transphobic screed stoking hate and violence, or so say his trigger-happy prosecutors. He’s been condemned by heavyweights such as the showrunner for Dear White People, something called the National Black Justice Coalition, and GLAAD. The media has amplified and shared their righteous indignation. Sure, its “comedy,” but these are deeply unserious people who take everything too literally, and in a hyper-sensitive and intellectually frivolous culture, where cherrypicking and moral pantomime are the dominant grammar, risqué art is heresy – and we know what happens to heretics.

The Closer is not bigoted; it’s not ignorant; and it’s not hateful. Rancid shock-jocking is not uncommon in comedy clubs, used by those low on the comic talent bell curve to get a cheap laugh, but Chappelle is no amateur. Rather, The Closer is a mic drop, a simultaneous “fuck off” and grand finale from a master who is sick of a culture incompatible with unfettered comedy, and bored with its obsessions.

And it may just be his best special yet.

Chappelle burst onto the scene as a teenager, appearing in many films and shows before getting his own, Chappelle’s Show, which ended in 2006 after he turned down $50M to renew, believing the direction the show was going was morally wrong. Throughout, whether in character or as himself, his comic manner has been lithe and athletic, as though on the balls of his feet, playing with the medium, having fun, until now. He’s slower, more pissed, more aggressive and it amplifies a nervous energy the crowd is already primed to feel.

Comedy functions on tension; the set up builds it up, before the punchline relieves it with a well timed delivery of the unexpected. If you’re already tense – Is Chappelle bigoted? Is he going to cross a line? – then this inversion is even more satisfying and hilarious, and he knows it. His jokes are brutal plays in form and digression, teasing the audience through weirdness and off-kilter offensiveness, flipping between quaint and savage, like his best joke, about ‘Clifford.’ But that joke, returned to throughout, also perfectly demonstrated how he uses that release of tension and inversion of expectations to fiercely make a point, and reach a deeply moving conclusion.

We often say that stand-up comics are just there to make us laugh, particularly as more eschew that in favor of lucrative political gigs. Though humor is its primary, defining quality, the medium’s button pushing subversion has always allowed for the discussion of truths and views too raw and rough for a New York Times column, and The Closer demonstrates that as well as George Carlin did.

After a traditional opening, sifting through a pick-and-mix assortment of jokes about cultural sensitivity, a sci-fi movie idea, Covid-19, and the Johnson & Johnson vaccine – “I’ll have what the homeless people are having!” – Chappelle brings up the case of DaBaby, and the outrage sparked by his homophobic comments:

“[They don’t] know his history, he’s a wild guy. He once shot a nigga – and killed him – in Walmart… Nothing bad happened to his career. Do you see where I’m going with this? In our country, you can shoot and kill a nigga, but you better not hurt a gay person’s feeling.”

I am reminded of Ricky Gervais’s joke at the Golden Globes about Caitlyn Jenner not doing a lot for women drivers, and how there was more outrage at the ‘transphobia’ of his poke than the millionaire celebrity killing someone. And as Chappelle says in the special, “This discrepancy is what I want to talk to you about tonight.”

From here, he launches into a series of jokes and stories dispelling certain narratives about him– that he’s sexist, homophobic, and transphobic – before telling exactly the type of jokes that founded those smears, but now before an audience primed to see the accusations aren’t so. As Anthony Jeselnik said during one of his specials, people mistake the subject of a joke for the target and though Chappelle may often discuss trans people, modern feminism, and the gay community, they aren’t the target. He’s aimed squarely at the hypersensitivity and moral preening that rots our culture.

If charitable cherrypicking was in season rather than institutionalized smearing, journalists would be praising Chappelle’s self-declaration as a feminist, his story of concern for a young trans person, and how he uses his platform to champion issues that black Americans face and white liberals ignore. That wouldn’t be the full story – but it’d be a lot closer to the spirit of his special than the Guardian and BBC headlines caught up in “I’m team TERF.”

The irony is that, in another era–just a couple of years ago–his jokes about respecting those “old-school gays … Stonewall niggas… gloryhole niggas” – “there’s a lot of courage on both sides of that hole” – would have been praised for his boldness and embrace of gay humanity, particularly as a comedian who notably speaks to black, working class, American men.

And then there’s the final twenty or so minutes, where he tells the story of his friend Daphne, who is transgender. Stripped from the surrounding special and shown to an ignorant onlooker, they’d, rightfully, say it’s a touching tribute to his friend, defining her by the vibrant individuality and humanity she embodied, and not an irrelevant identity group. It’s a great end to the special and more emotionally potent than any Hannah Gadsby tirade (with the added quality of being genuinely funny).

The broader point throughout is not that you shouldn’t care about important issues. It’s that, if you do, then act, because the LARPing of morality is worth less than nothing. The aforementioned National Black Justice Coalition have condemned Chappelle, as widely reported in Variety and other places, but have you ever heard of them before, let alone commenting on the issues most affecting working class black Americans? When was the last time you saw GLAAD do anything to fight the persecution of gay people in the Middle East, put to death by stoning and crane? And is it incidental that most moral showrunner of Dear White People – who is white, for what it’s worth – condemns Netflix after the final season of her show debuts? Compare that with her silence about his last special Sticks & Stones, which was also released by Netflix, and also featured jokes mentioning trans people.

GLAAD is not being moral for denouncing Chappelle, they’re fundraising. These screaming celebrities, showrunners, activists, and organizations may be sincere in their inconsistent, hypocritical convictions, but boy are they conveniently timed. Note how quiet they go when any skin is in the game. And isn’t there something fucked about that?

His point is not that trans people don’t matter – he has never said that, and Daphne’s family attest that it’s quite the opposite of that – but that the most outrageous things he has said, and that the media has been engulfed in outraged chatter about, are fundamentally banal and harmless. They are just words, and the saying behind Sticks & Stones has not faded with age. So why are they talking about that and not the struggles that worsen and take the lives of black Americans? Why is it that words that offend white liberals get more attention than the suffering of their countrymen? Or to repeat his thesis, why is it that “In our country, you can shoot and kill a nigga, but you better not hurt a gay person’s feelings”?

Chappelle is done, hanging his coat up because he’s sick of the deliberately misconstrued responses to his comedy, and it’s all getting really, really boring. Despite claims that he’s ‘obsessed’ with trans people, that simply isn’t true. Our culture is, and comedians comment on the world they see. But if we just talk about the same subjects, in the same way, then the comedic potential dissipates – the tension releases. Get told the same joke ten times in a row and see whether you’re still laughing on the final punchline. Our culture has become Cady in Mean Girls, obsessively talking about the same few things. It’s why there will never be another good Trump joke, and why this may be the last great comedy special about this cultural moment.

If this is where he leaves it, it’s a dire condemnation of our culture, but also a great testament to his skill. The enormity of its structural and literary quality won’t be appropriately acknowledged until our culture calms down or moves onto some new topic to be heated about. Consider how little fuss has been made over his breathtakingly funny and brutal joke referencing anti-Asian hate crimes and contrast that with the reception it would have received when that was the cause of the month.

He won’t get the praise yet, but he doesn’t give a shit. He isn’t performing for Twitter, and he doesn’t care about the news. He’s speaking his mind and mastering his art form, and that will be enjoyed and appreciated long into the future.

No wonder he’s the GOAT.

Ross Anderson writes about culture, technology, and politics, and was a 2020 Fellow at Tablet Magazine. His work has been published in Los Angeles Magazine, The Dispatch, The American Conservative, Arc Digital, and he is a contributor to Tablet Magazine‘s ‘The Scroll’ newsletter. Find him on Twitter at @thatrosschap

Behind her shiny eyes