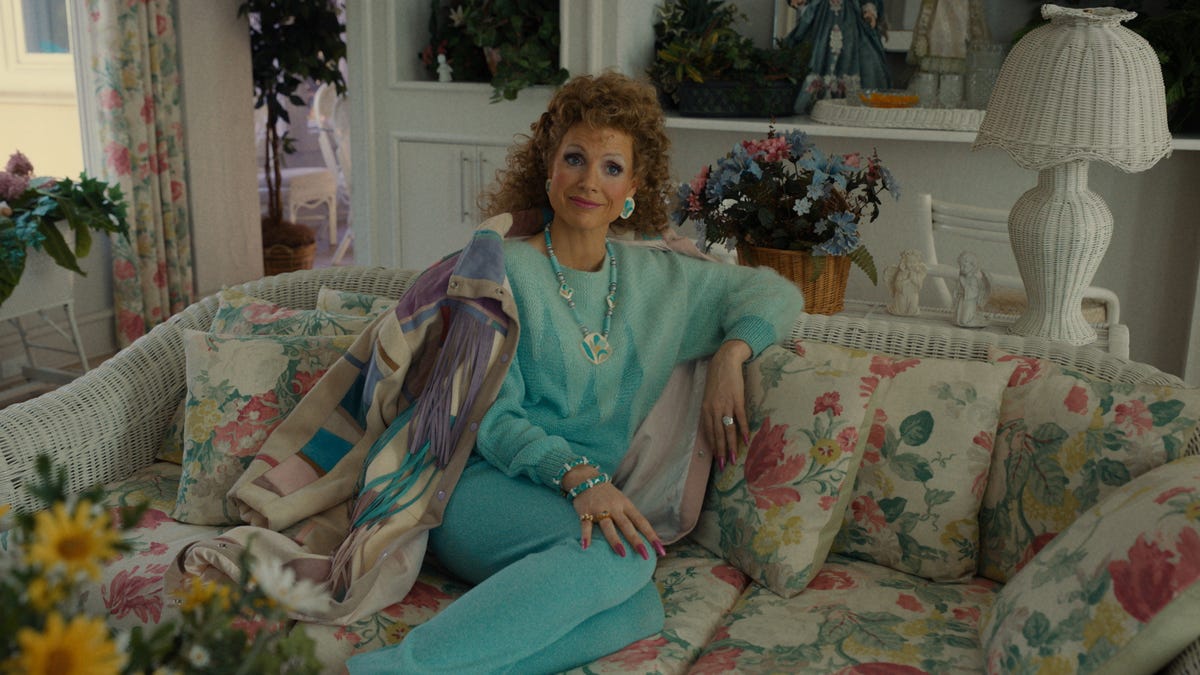 It’s glitz and make-up, a curved hand and cheeky remark made in a lilted voice, but above all else, it’s the performance of heightened personality. Camp is, somewhat, insincere, a way to present a blithe positivity uncoupled from the grit, and pain, and drudgery of the unglamorous world.

Tammy Faye Bakker was definitionally camp – covering herself in sparkling make-up that hid the tears of her troubled, glitzy existence – and her tale is as dramatic as they come. Tammy dropped out of college to marry her future husband, Jim Bakker, two days after their first date, and with whom she became among the most successful televangelists in history, before her millions were lost amid fraud, felonies, and infidelity, and somehow came out the other side as a cult-icon for gay Americans.

If anyone’s life is fit for the big screen, it’s Tammy Faye’s; but such an adaptation is pointless if it fails to peek behind the curtain of public personality and see their unvarnished humanity.

And so it is with this new biopic, The Eyes of Tammy Faye.

Michael Showalter, the film’s director, is notable only for the consistent mediocrity of his filmography, and treats her life as little more than the “true story” canvas to string around a crime-biopic frame. He cuts off all extremities that don’t fit, and skews everything remaining to fit the genre’s tropes. “Thank you, Jesus” prosperity gospel money is just “fuck you” money with different seasoning. There are the same blurred montages of drugs, decadence, and champagne, however unconvincing. And when the FBI finally looks around the property, it’s shot with the same framing and techniques as every previous crime film (down to that same telescopic shot of the FBI agent looking at a boat).

It’s so generic, so overwhelmingly artificial, that it renders the unbelievable reality of her life just… unbelievable. There’s an element of satire to be exploited in this story – which Showalter lightly flirts with but never has the will or wit to commit to – but this film is so unoriginal, and so steeped in corporate aesthetics, that it unintentionally emulates Walk Hard: The Dewey Cox Story; a spoof mocking Oscar-bait biopics.

There are even moments of commentary that Showalter obviously misplays. A quick montage of talk show host mockery is meant to convey the rejection Faye felt during her husband’s trial. But those millionaire talk show hosts weren’t her tribe but her competition, and the religious, let alone the proudly individual, have always been rejected by the media mainstream. Lo, this film’s inability to treat her as a full person only perpetuates that.

Being so nonspecific, Showalter’s bland ‘style’ ends up oddly toning down some of the more incredible aspects of her life. Despite the montages, wide shots, and mansions, dollar figures are never really mentioned so you forget just how much money was involved in these scandals. When Jim Bakker was arrested, their religious theme park, Heritage USA, was valued at $125M, and he was charged for mishandling $158M in donations. The silence of his mistress – which is continued in this film – was bought for $279,000. That’s in 1988 money.

But these failings are no more obvious than in the depiction of Tammy Faye, played by Jessica Chastain. She’s the protagonist in terms of screen time, but not in depth. She’s never allowed to be a human being and instead is reduced to a pastiche. The talented Chastain has been widely commended for her transformation – as though cladding oneself in Chipmunk-esque prosthetics is some remarkable feat – but doesn’t get to portray Faye as a real human.

Instead, she’s a live action cartoon, voice never modulating or moderating, always lilted or shaking or pitched, and her face is never neutral, always smiling or laughing or pouting or SAD! One quickly becomes bored of the performance, and resentful of the film’s condescending, faux moral tone, congratulating itself for being the entity to finally present her in a new light and treat her sympathetically, when all it has done is make yet another caricature.

Faye was a deeply religious woman but her relationship with her faith is scantly explored, and those great religious themes explored in films from Black Narcissus to Silence are utterly absent here. Despite being a mega star who loved the audience and attention, her relationship with fame is never engaged; it approaches interesting questions about her insecurity and dependence on applause but never actually grabs them. Her life was profoundly shaped by her relationships with and separations from two extreme failures of husbandry, but you never feel what she saw in them, or what she felt throughout her relationships. Falling in love, marrying, fighting, having success, having children, divorcing, and so on are just plot points to put an et cetera behind.

Most oddly of all, it barely considers the cult status that Tammy Faye obtained within gay America. It’s not just that she embraced gay men when every other televangelist condemned them to hell – seeing AIDs as God’s punishment – but she resonated with those queens and queers as a similarly flamboyant, hyper-individualist who didn’t care one wit what the mocking mainstream thought of her. Her embrace and celebrity among this new community would have made for a richer, more impactful finale; but the gay look-alike contests and Pride appearances are never mentioned, let alone shown. Why? Well, because that isn’t part of the crime narrative, Showalter screams! Henry Hill didn’t become a regular at leather bars! We must obey the tropes!

Ironically, because Chastain’s Tammy is simultaneously so hollow and dominant in the film, the comparably oblique and complex figure of Andrew Garfield’s Jim Bakker becomes far more compelling. Garfield also hams him up, leaning into the repressed man-boy angle more than necessary, but there’s more going on in his life; more lying beneath the surface. In their first conversation, Tammy says she has no secrets, whereas Jim admits to having them, including dark, sinful ones.

That makes Tammy more trustworthy, but also way more boring. You want to know how Garfield’s Bakker feels in his private moments, whether he self-justifies, denies, or feels guilt for his fraud; whether he feels torn about his potential bisexuality/homosexuality; and you want to know what happened with his mistress, Jessica Hahn. In the film, she is a nameless line and then a scandal, and you never see how Jim acted during the seduction, or what he thinks of her in the aftermath, or feels about himself. In reality, Hahn said it was not an affair but that Bakker and a PTL co-member drugged and raped her. Though this may not be true – Jim is hardly an honest narrator, but we are all too familiar with false accusations – a bolder film would embrace that ambiguity, make us question whether this man-boy is capable of such darkness. Show us flickers of his sins and we’ll be more invested in his character and concerned for what he will do with Tammy.

But this film is a comic crime-biopic, remember? We won’t get an Oscar nomination with that in it, Bob.

The best way to understand this film is by revisiting the 2000 documentary that it takes its name after. Narrated by RuPaul, the documentary opens with Tammy talking about her fascination with eyeglasses, how she asks for those of her loved ones who’ve passed, so she could see the world as they saw it. It’s odd and a tad unsettling, but also beautiful and intimate.

In the film, she tries her mother’s glasses on at her funeral and remarks how thick the lenses are. That’s it. Showalter – and the screenwriter Abe Sylvia – watched the documentary and must have thought “that will make for a good line.” That’s the depth you get in this film; it’s not terrible, just overwhelmingly mediocre. I’d recommend watching the documentary and save half an hour of your life.

Faye once said, “Without my eyelashes, I wouldn’t be Tammy Faye.” She was wrong – she was so much more, with so much color, character, and individuality, and able to survive personal turmoil that would have crushed so many others, without it dampening the spark of her personality.

But for Showalter, she’s nothing but her make-up, nothing but camp. She’s not a person; she’s a chance for an Oscar nomination.

I hope he doesn’t get it.

Ross Anderson writes about culture, technology, and politics, and was a 2020 Fellow at Tablet Magazine. His work has been published in Los Angeles Magazine, The Dispatch, The American Conservative, Arc Digital, and he is a contributor to Tablet Magazine‘s ‘The Scroll’ newsletter. Find him on Twitter at @thatrosschap

Related Topics:EntertainmentFrontFeaturedHollywoodLGBTTammy Faye Bakker
Up Next