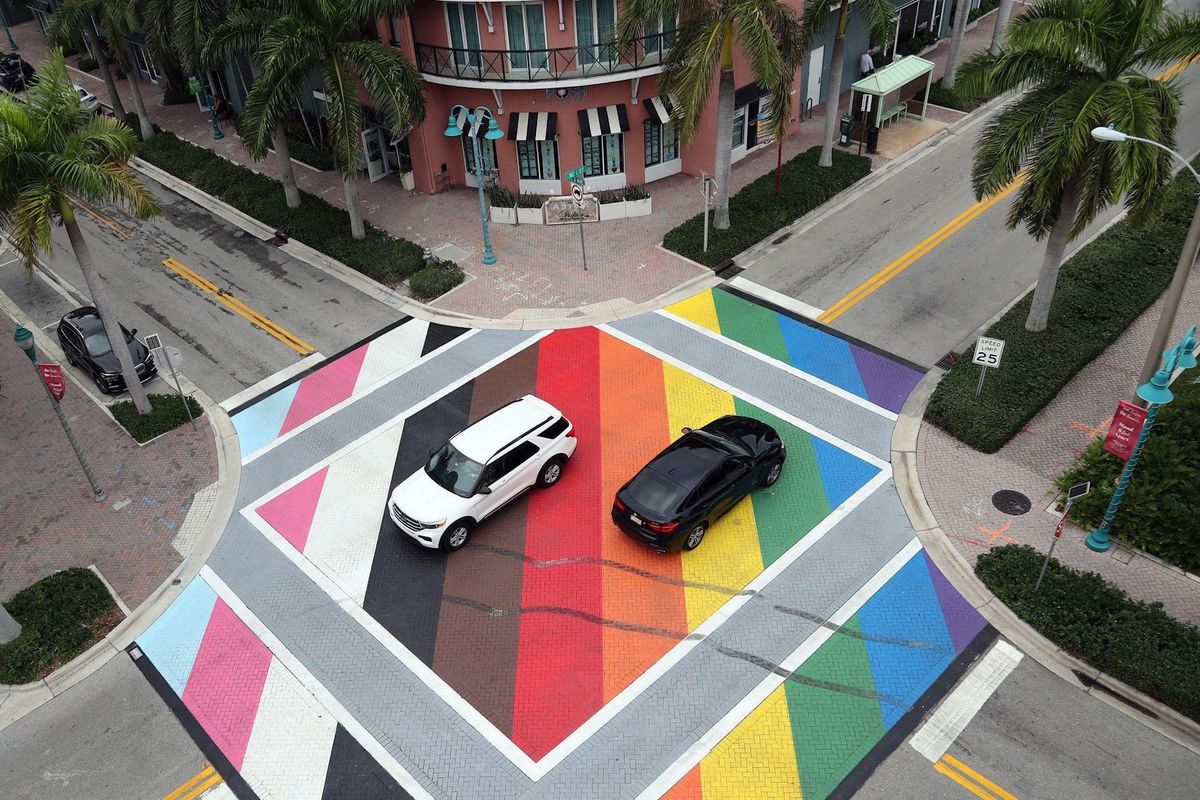 Last June when the city of Delray Beach, Fla. had a prominent crosswalk painted in LGBT Pride colors it was, of course, not just your run-of-the-mill rainbow. The monstrosity known as the “inclusive” pride flag was slathered onto the pavement, complete with the trans and BIPOC colors—as if the original one excluded any of those people in the first place. Just two days after it was installed, a 19-year-old man named Alexander Jerich drove through the intersection and purposefully defaced the proverbial skid mark with two literal skid marks.

Jerich pled guilty to the crime and agreed to pay just over $2,000 to have the mural repainted. He was reportedly very remorseful for his actions, and even cried during his hearing. Considering this remorse and his young age, the judge showed some leniency in sentencing. However, the strange nature of that sentence is garnering publicity around the case. On top of a little community service, Jerich was sentenced to write a 25 page essay on the 2016 Pulse nightclub massacre that took place in Orlando.

While bizarre punishments like this are not unheard of, they’re also not commonplace. A punishment should fit the crime, and in cases of these creative sentences, the punishment is intended to act as a teachable moment for the perpetrators. The judge, however, seems to have failed at hitting either of those marks.

There is a severe false equivalence here. Suggesting that defacing public property is somehow on par with the massacre of 49 people, or even suggesting vandalism is a stepping stone to a much bigger crime, is completely absurd. Presumably the judge was persuaded in the sentencing by the “victim impact statement” given by Rand Hoch, president of Palm Beach County Human Rights Council. Hoch claimed the mural was meant to make people feel “proud, safe and welcomed in Delray Beach. Now we feel angry, threatened and vulnerable,” the statement said. Hoch even requested that the judge sentence Jerich to prison time. Considering the act did not harm or even threaten the wellbeing of a person or their property, and this was a victimless crime, I am not sure why a “victim impact statement” was needed in the first place.

The only other possible connection between this act of vandalism and the Pulse nightclub massacre that would make the essay assignment in any way teachable is that both crimes are seen as targeting the LGBT community. The problem here is that in the case of the Pulse shootings, that assumption is not based in fact. Through the investigation, the notion that the shooter was purposefully targeting LGBT people was fairly well debunked. It was uncovered that the shooter targeted that specific club due to its lack of security and armed guards. In fact, a look into the shooter’s Google search history showed he intentionally researched “Orlando nightclubs” and not “gay clubs.” Pulse happened to be at the top of the list of search results.

Those facts went underreported and unreported because the media wanted to feed into the fear and paranoia that anti-gay hate crimes and deadly bigotry are still rampant in this country. While the tragedy was still a dark spot for the LGBT community in both Orlando and throughout the U.S., the motive behind the massacre is paramount to the narrative. Unfortunately, the false revisionist history has already been established and passed off as fact. The notion that the Pulse massacre was a LGBT hate crime is the new “Marsha P. Johnson was a transgender woman.” The truth matters less than the desired illusion.

That desired illusion has successfully taken hold of the media and political discourse, but the legal system is supposed to be immune from such things. That no longer appears to be the case. How many times has the legal system given a different outcome than the court of public opinion? While the media and politicians examine a skewed version of reality, the legal system examines the un-doctored photograph. The Kyle Rittenhouse case might be the best contemporary example of this. The preliminary convictions shouted out from the soapboxes of cable news and political pulpits convinced the public he was guiltier than homemade sin. However, the jury studied the facts and declared him innocent, a decision that shocked the portion of the population that bought into the bullshit.

That is the beauty of the American justice system. It is the last bastion of fact over fiction. It is designed to be immune to media slant and political ideology. That is precisely why this one blip on the radar should be concerning to us. At the very least it should warn us to watch for other similar incidents in the future. Basing a sentence on a media lie could be a one-off, or it could be a sign of more to come.

I hope Jerich does his research into the Pulse massacre case. If he does, he will find that it was not an anti-LGBT hate crime–and that doesn’t diminish the unspeakable horror of what happened there. Maybe he’ll craft a 25-page essay that teaches both him and the judge about the importance of fact over a convenient narrative-driving illusion.

The left has gone full fire-and-brimstone over ‘transgender children’