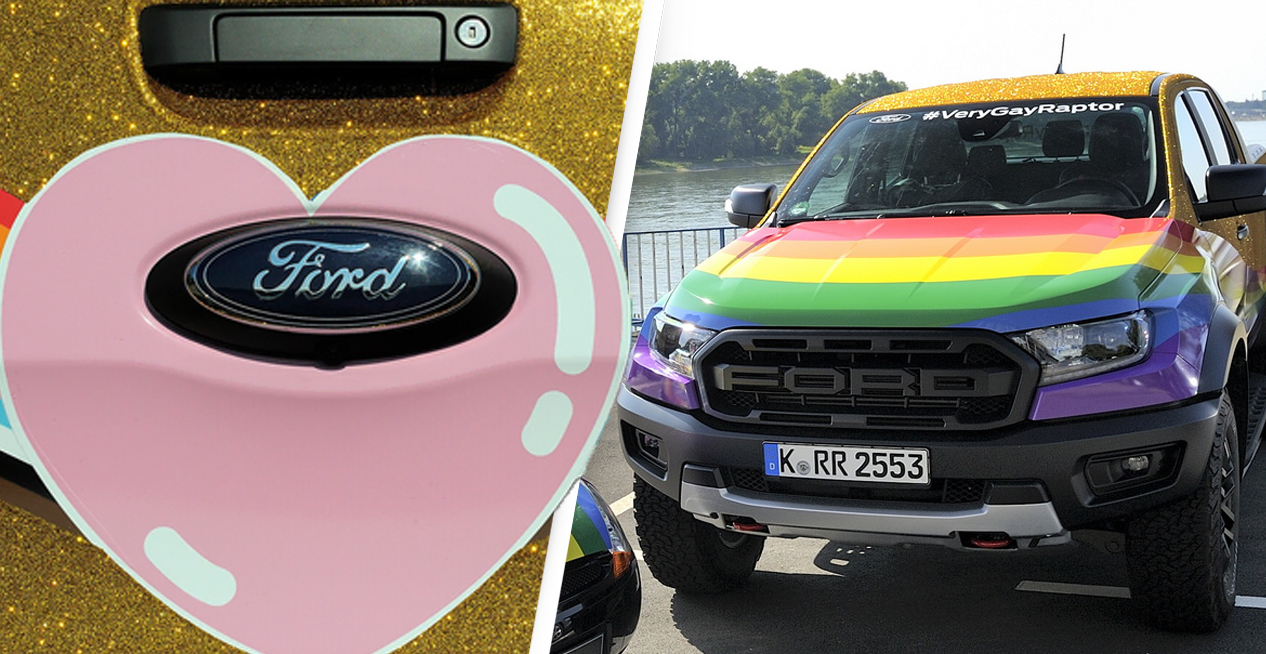 Ford Europe tired to shut down an alleged homophobic comment by exaggerating gay stereotypes and paint a truck with rainbows and glitter.

A few months ago, the car company released the Ford Ranger Raptor. Reports claim that someone posted a comment to social media praising the car but calling its blue color “very gay.” The commenter also reportedly suggested that the company paint the car black and gold or camouflage. While multiple news outlets have run with this story, none seem to have details of where the comment was posted or proof of its existence.

Perhaps by coincidence, during Pride month in response to the alleged comment, Ford released a 30-second advertisement depicting what the company perceives would be a “very gay” car. It began with the claim that their new vehicle had garnered much attention. “Our latest Raptor reveal has had a lot of attention, but one comment stopped us in our tracks,” the advertisement proclaims.

The commercial then shows a manufactured facsimile of the alleged homophobic comment, and an animation depicts a paintbrush transforming the car from its original blue to a glittery gold with sweeping rainbows flowing down the sides and the words Happy Pride displayed on the screen. Then the car company touts its “over 25 years of LGBTQ+ advocacy across Europe.”

Adding insult to injury, Ford recently took the animation from the commercial and manufactured a real version. It debuted over the weekend during Cologne Pride in Germany. According to Ford, the truck was wrapped in 323 square feet “of foil in the unique rainbow and gold dust design” taking workers approximately 60 hours to apply. A rainbow-clad compact car was also on display.

Ford tweeted pictures of the stereotypically decorated vehicles just a few days ago. “You asked #Ford to make the #VeryGayRaptor a reality… and we heard you. Our-real life version made its debut at Cologne Pride last week in all its rainbow-adorned glory,” the company tweeted.

Twitter did not disappoint as comments poured in tearing into the company.

One gay man sarcastically pointed out the clear homophobic pushing of gay stereotypes. “Yes Ford, because all Gay men like hearts, rainbows and f**king gold glitter,” he wrote.

One man was less subtle stating that painting cars like this is actually insulting to the LGBT community. “I feel like that is actually a total insult to gay dudes I know. Like a gay caricature,” he tweeted.

While Ford touts its work in Europe supporting LGBT rights, the company cannot say the same in the Middle East. The company has been operating and making a lot of money in that region for years. In 2013, it was reported that the Dubai-based arm of the company expanded their business and accelerated their growth by up to 40%. In 2019, it was reported that Ford boosted their sales in the region by 50% over previous years, climbing 96% in Saudi Arabia, 15% in the UAE, and 56% in Kuwait. Homosexuality is illegal in all three of these countries, yet Ford has not made a statement about the the lack of equality for LGBT people. Furthermore, Ford did not publish the same Pride advertisements on their Ford Middle East Twitter account that were published on the Ford Europe account.

CNN contributor who calls GOP ‘homophobic’ registers as lobbyist for Liberia, where homosexuality is illegal