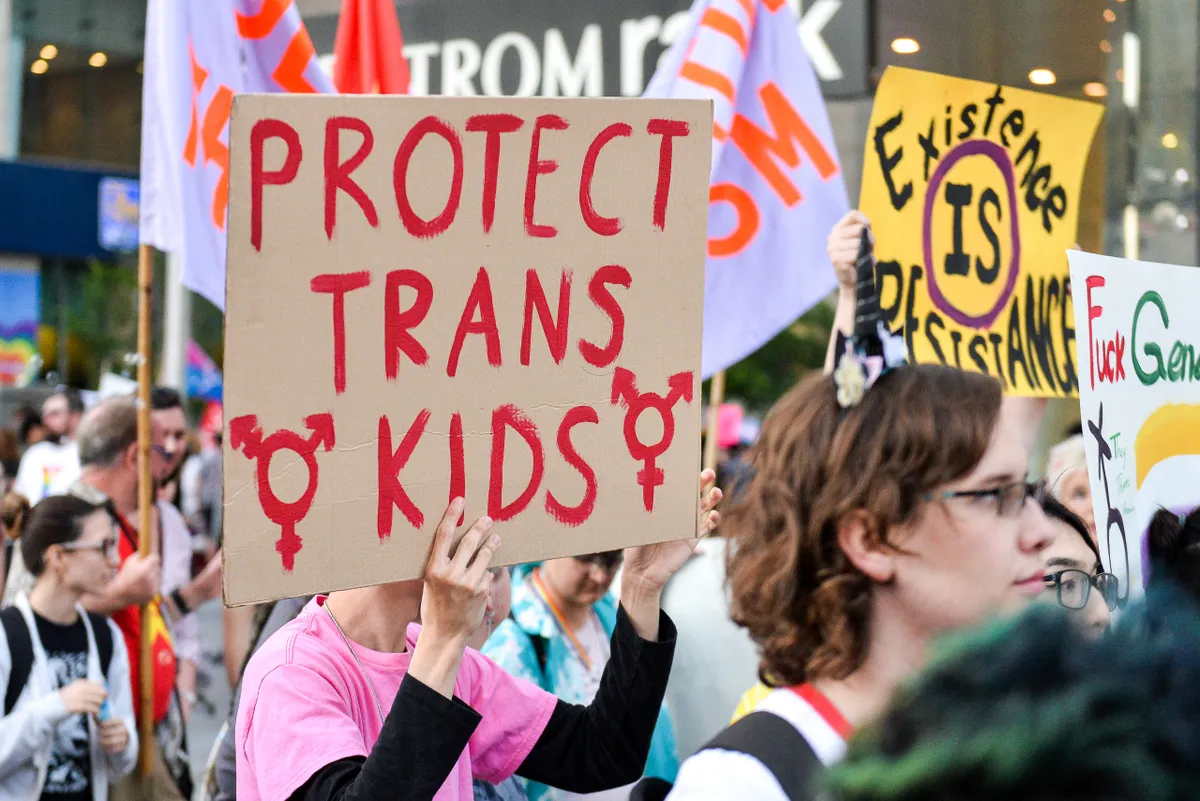 The radical left, in particular the rabid LGBTQ activists, are not often welcoming bedfellows to Christianity. In fact, a large proportion of them openly mock and disparage those of us who do have any modicum of faith. That’s why I was incredibly surprised to see a recent op-ed by editor-at-large John Casey in the Advocate making ludicrous and cringe-worthy religious-based arguments and using incendiary fire-and-brimstone language like, “You will all burn in hell.”

Casey opens his poorly written diatribe with a quote from the Bible’s gospel of Luke. The passage quotes Jesus saying, “Let the little children come to me, and do not hinder them, for the kingdom of God belongs to such as these.” He then uses this quote to argue that recent legislation such the so-called “Don’t Say Gay” law in Florida and the bans on “Gender Affirming Care” of minors is in some way hindering children. In his colorful disgust with Republicans who are drafting and passing these laws, Casey at one point demonstrates outright that he neither owns a dictionary nor has a semantic ear for English when he uses the word “literally” incorrectly. “[T]hese monsters and their monstrous acts are literally slicing the wrists of these children who yearn so badly to be themselves,” he dramatically states. Ironically, it is actually the Republicans who are halting the literal slicing and injecting into children by banning gender reassignment and hormone therapies.

Casey’s penchant for homosexual hysterics does not end there. He goes full scorched-earth channeling a southern Baptist minister of yesteryear by condemning “any legislator, any governor, any senator, any parent who supports these bills” to an eternity of hellfire.

Without knowing anything about Casey’s religious beliefs or affiliation, I am willing to bet, as any true leftist, he is not really a man of faith. Performing a perfunctory Google search for “Bible quotes with Jesus and children” does not a religious scholar, or even true believer, make. Looking at the quote from the gospel of Luke, it is very clear that Jesus is saying children should be encouraged to come to Him to obtain love and salvation. The word “hinder” means the children should not be held back from learning and practicing religion. It seems to me that Casey has actually unwittingly advocated for prayer in schools.

Instead, he seems to be suggesting that this scriptural quotation is in some way advocating for completely and permanently altering natural biological processes that God has set in motion by injecting man-made chemicals into the bodies of children. That is elevating man’s creation above God’s creation. That is heresy. That is child abuse.

Humans have always operated under the assumption that children rely on adults. They are unable to fend for themselves and perform adult functions because they lack the experience and mental maturity. Under that same reasoning, minors are not able to consent to sexual intercourse because they lack the maturity and understanding of the weight of such a decision. If these are accepted truths, why is it not also accepted that children cannot comprehend and process topics as complex as sexuality and gender? It is a parent’s job to help his or her child navigate and understand those areas, not a blue-haired millennial zealot with an agenda moonlighting as a teacher.

Ever since the gender and sexuality indoctrination began in primary and elementary schools, the amount of Americans who identify as LGBT has risen drastically. While that is not necessarily cause for alarm, there has also been a sharp rise in the amount of people who are de-transitioning — people who considered themselves transgender, began the permanent process of transitioning, and then changed their mind trying to reverse course. Those two facts in tandem are cause for alarm, and the recent legislation is partially in response to that data.

As a Christian gay conservative, I ask that Casey spare me the “think of the children” rhetoric because the physical and mental well-being of the children is exactly our priority, not their indoctrination and grooming. Now that the veil has slipped and parents are aware of what is being taught to their children, they are standing up for their rights. Parents are taking back their ability to rear their children as they see fit for the Bible also says in Proverbs 22:6, “Train up a child in the way he should go: and when he is old, he will not depart from it.”