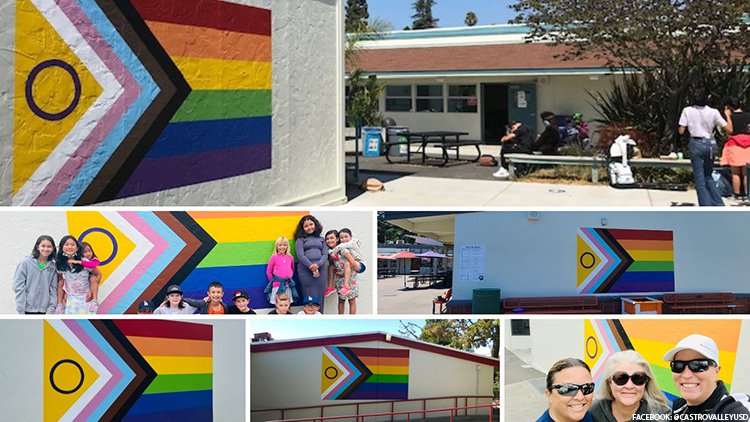 Murals painted outside schools in Castro Valley, Calif. // The Advocate

The Castro Valley School District, outside of San Francisco, Calif., has taken a further step to announce its progress and commitment to inclusion to the world. All 15 schools in the district have painted a version of the gay Pride flag as a mural on their school buildings. Of course, they couldn’t use the traditional rainbow Pride flag. Instead, they opted for the grotesque monstrosity that has been dubbed the “Progress Pride” flag.

The Advocate reports that this initiative was started by two students who wanted to paint a rainbow walkway at the Castro Valley High School. This small, localized suggestion then exploded into something much bigger involving every school in the district.

A committee of parents and students from around the area was formed. While the original idea was clearly LGBT centric, this committee felt the need to virtue signal to all communities at once. The committee reportedly said, “How do we make this more than just painting a flag and having people appreciate it? How do we do some real good work that is antibias and aligned with our obligation to combat the kind of racism, sexism, and other forms of bias and hate we encounter in our country?”

On February 9, 2022, the school board heard from Marian Meadows, the Coordinator for Behavioral Health for Castro Valley Schools. Meadows, an apparent woke and self-hating white woman, presented in the meeting about her “LGBTQ+ Path to Progress,” which included the painting of the Progress Pride flag at every school in the district. However, there was more to it than that. Along with the mural, teachers in the district developed a curriculum of “Social-Emotional Learning Lessons.” These lessons are to be a part of the overall anti-bias curriculum used throughout the school district. Of course, the board, which is primarily composed of other woke white people, approved the motion, and over the next few months the debt to the social justice gods was paid via the painting of the murals.

The first issue with this story lies in its inception. Two students came forward with an idea… just two. There was no report of a petition. There was no large student organization that sponsored the request. The school board voted to force the schools to paint flag murals because of two out of over 9,200 students in the district. Who is really in charge here: an infinitesimal minority of students or the supposed adults? The lunatics have apparently taken over the asylum. Meadows directly admitted this during her school board presentation as she suggested they bow to the whims and dictates of the students. “Most often our youth are way ahead of us. So always going to them to explain who they are and who they are becoming is of critical importance as we continue this work,” she said.

Now, to give these two students some credit, their original proposal seemed simple. One rainbow flag on a walkway at the high school is not exactly unreasonable. Furthermore, in a high school environment where students may have a better grasp of their sexuality and personality, it is not strange that students may want some overt representation. However, there is no reason a flag illustrating sexuality and gender identity should be present at an elementary school. In fact nine of the 15 schools in the Castro Valley School District are elementary or preschool level. One might dare call this the work of “groomers” if there weren’t the fear of being censored or chastised for pointing out the dirty and uncomfortable truth.

But perhaps simultaneously the most egregious yet least surprising part of this story is the hijacking of a simple idea for representation into something more sinister: straight-up indoctrination.

If the original proposal for a pride flag mural were suggested within a corporation, the acquiescence and display of the mural would be enough. It is a forward-facing virtue signal that appeases the activists.

However, the people working within education are themselves activists. A simple mural is not enough. But it is the perfect Trojan horse for them to sneak in more propaganda. However, they make certain the media only reports on the mural, the physically tangible and social media-friendly aspect. The public and parents are none the wiser of their deceitful tactics.

The snakes of the education system have learned the tricks all too well, and unfortunately as someone who has worked in this sector for most of my career, I have had a front row seat to their ways. With academics’ inherent need to spread activism and their fear of being labeled as anything but antiracist, unbiased, and dedicated to social justice, educators will bow to the will of any minority to the detriment of the majority. However, thanks to the work of newly formed political action committees and other outspoken people on the right, woke school board members are scrambling to save their jobs. Considering the results of the recall election of the deep blue San Francisco School Board members earlier this year, or the failed attempt this week to declare October LGBTQ history month in Miami-Dade schools, the Castro Valley School Board members should be quaking in their boots.