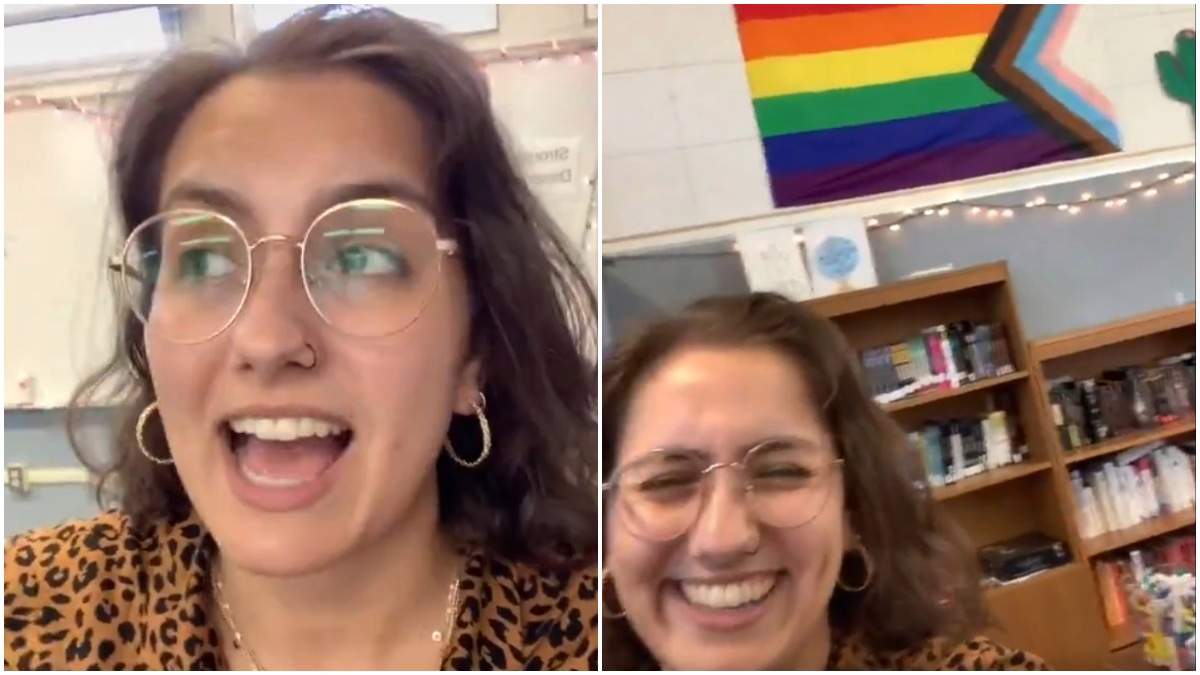 A Southern California teacher has been temporarily removed from her classroom after posting a viral video where she suggests her students pledge allegiance to a newfangled version of the gay Pride flag.

The teacher, Kristen Pitzen, from Back Bay High School in Costa Mesa, Calif., posted a video to Tik Tok in which she describes her class’s daily ritual during announcements. At the conclusion of the announcements, the pledge of allegiance is recited, and Pitzen claims to allow the students to participate however they see fit. They are allowed to sit or stand and may recite the pledge or not.

Pitzen then points out while chuckling that there is currently no American flag on display in her classroom. She removed it from the wall during the Covid shutdown because it made her “uncomfortable,” and she has not replaced it. At one point in the video she insinuates that she no longer knows where the flag is.

She recounts that a student approached her claiming it was strange to say the pledge to a non-existent flag. She says that she reassured the student that she would continue searching for the missing flag. The video then cuts to Pitzen giggling and shaking her head indicating that she was lying to the student.

She then supposedly told her student, “We do have a flag in the class that you can pledge your allegiance to.” The final piece of the video cuts to a shot of the newest iteration of the “more inclusive” Pride flag prominently displayed on the wall.

After the video went viral, Pitzen has been removed from her classroom as the school board conducts an investigation, according to reports. Many parents and internet-users are demanding her termination.

Officials of the school district have not commented extensively on this scandal citing matters of confidentiality. Officials did say that they highly value respect for the American flag. “A personal post by a teacher about the American flag is causing alarm/concern. Respecting our flag is a value we instill in students and is an expectation of our staff. We take this matter with extreme seriousness and are investigating and addressing it,” Newport-Mesa school district tweeted after the video went viral.

Pitzen has deleted her Tik Tok account and apparently does not have any other public social media accounts. That has not stopped people from giving their thoughts and opinions on the story and Pitzen’s original video.

One Twitter user found her unfit to be a teacher, not because of her political beliefs, but because she blatantly lied to and misled her students and laughed about it. “I found the way she was laughing at misleading her student to be the worst part of the video. I don’t care about her personal view of the flag, but her laughing about how she treated the student tells me she is unfit to teach,” the user wrote.

Another user responded to the Newport-Mesa school district’s comment clarifying that since the video was shot in a classroom, it should not be considered a “personal post.” The comment further insinuated that Pitzen should be fired outright for her actions.

“It’s not personal when it’s filmed on school grounds. Purposely taking down our country’s flag, lying about its whereabouts and forcing children to pledge allegiance to a flag of the teacher’s liking is grounds for dismissal..go teach in Afghanistan if she’s ‘uncomfortable’ here,” the tweet read.

Even actress Patricia Heaton, who played in the sitcom Everybody Loves Raymond, weighed in on the video. She expressed her dismay at Pitzen’s unpatriotic attitude, which is especially poignant after the recent deaths of U.S. Marines in Afghanistan. “I’ve been reading about our fallen heroes all day, and then to see this…it made me weep,” the actress tweeted.