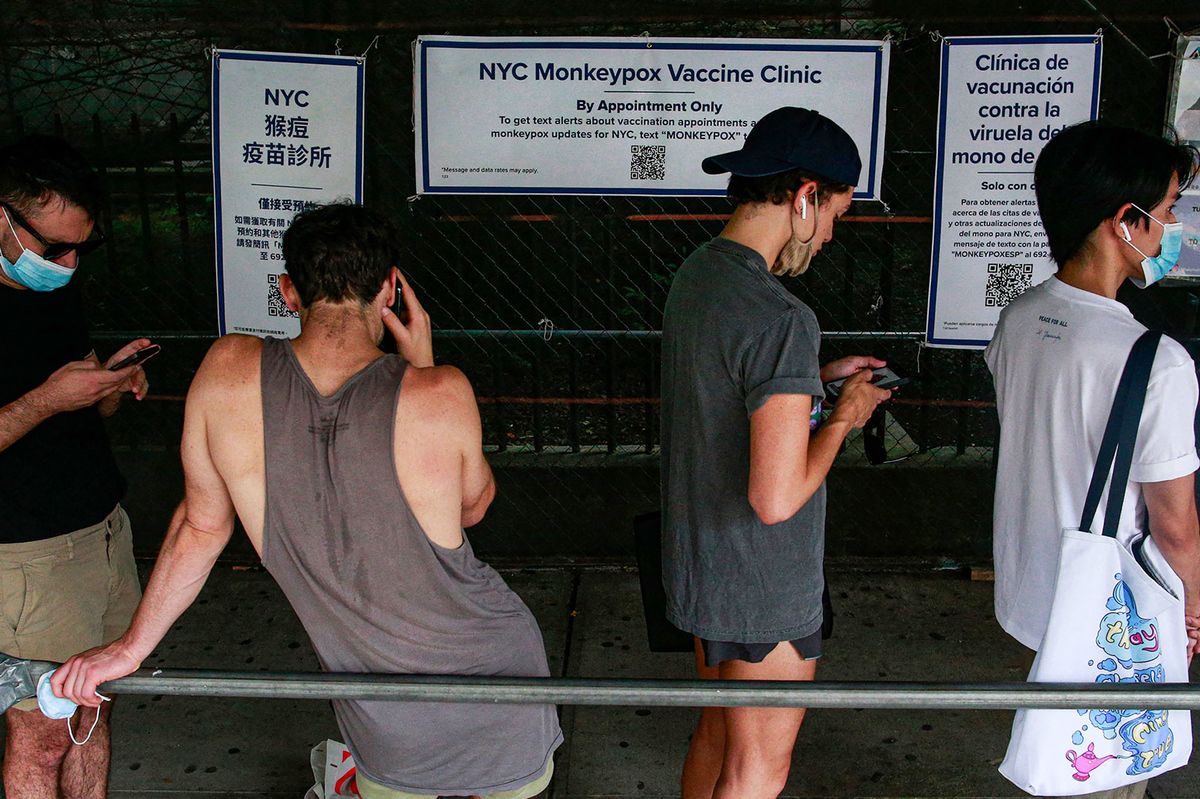 Men wait in line for the monkeypox vaccine in Brooklyn, N.Y. on July 17 // Bloomberg

This month the World Health Organization declared monkeypox a “global health emergency.” While technically monkeypox is not a sexually transmitted infection, or specifically a “gay disease,” prolonged contact during male on male sex is the most common way the virus currently is spreading.

As can be expected, people are drawing parallels between monkeypox and the AIDS epidemic that claimed the lives of so many people in the 1980s and 90s. With the advent and propagation of PrEP, by and large, gay men have dropped the pretense of safe sex. And with the popularity of online sex work, like OnlyFans, many gay men have seemingly become more debaucherous returning to the ways of Sodom and Gomorrah. As a population, we think we are now untouchable. We can have all the sex we want with very little repercussions. The usual STIs don’t scare us anymore because they are so quickly and easily curable.

That is no exaggeration either. We have now seen the videos circulating on social media of more gays waiting in line for the monkeypox vaccine than for Lady Gaga’s Chromatica tour. If she had set up a vaccination tent outside of her concert, maybe she would have sold more tickets.

There was also a recent article in the Guardian about a Swedish-born gay man living in Brooklyn, N.Y. who contracted the virus. He admits that he has worked in a sexual and reproductive health field, yet he still contracted the virus and expected a miracle cure. He detailed how he got the runaround when it came to the apparently hard-to-find antiviral drugs to combat monkeypox.

“But when I asked [the ER] for antivirals, they said they wouldn’t give them to me because they only gave it to people who were severely immunocompromised. I told them, ‘That’s not the CDC treatment guidelines.’ They wouldn’t have it, and they discharged me at 2 a.m. I was incredibly demoralized,” he wrote. He also whined, “I was isolated, lonely and frustrated with how unfair the situation was. I was clearly very sick, yet had to cobble together a care plan on my own.”

Overall, the article was meant to elicit a sympathetic or empathetic feeling from the reader. He moaned and complained about the anorectal lesions causing him to literally cry out in pain. While someone with a bigger heart may have felt sorry for him, I simply thought, “You brought this on yourself.” Contrary to popular belief in the gay community, random sex is not essential. Getting fisted by someone with lesions on his hands and arms is not akin to eating and breathing.

Furthermore, I feel obligated to call out my own ilk when it comes to this topic. When I refer to the lecherous behavior of the gay community, I do not mean to suggest that I am only singling out the progressive leftist gays. There are many men who identify as gay conservatives who are not conservative in their personal lives. Their social media presence may portray one image, but behind closed doors they act differently.

Conservatism treats monogamy as paramount and sex as sacred, confined solely within a relationship. A true gay conservative would have no need for a monkeypox vaccine and should not be scared of contracting the virus. Having one sexual partner whom you theoretically trust not to cheat, means there is no chance of catching monkeypox.

Monkeypox is a very visible virus transmitted by direct and prolonged contact with lesions. If gay men are so sexually thirsty to look past the fact that an open sore on their sexual partner is touching them, what will happen when the next deadly and invisible illness, like HIV, comes to be? The gay community must learn to navigate this epidemic and scale back their immorality, or we might be setting the stage for an even grimmer future.

Why aren’t activists talking about the new, deadlier strain of HIV?