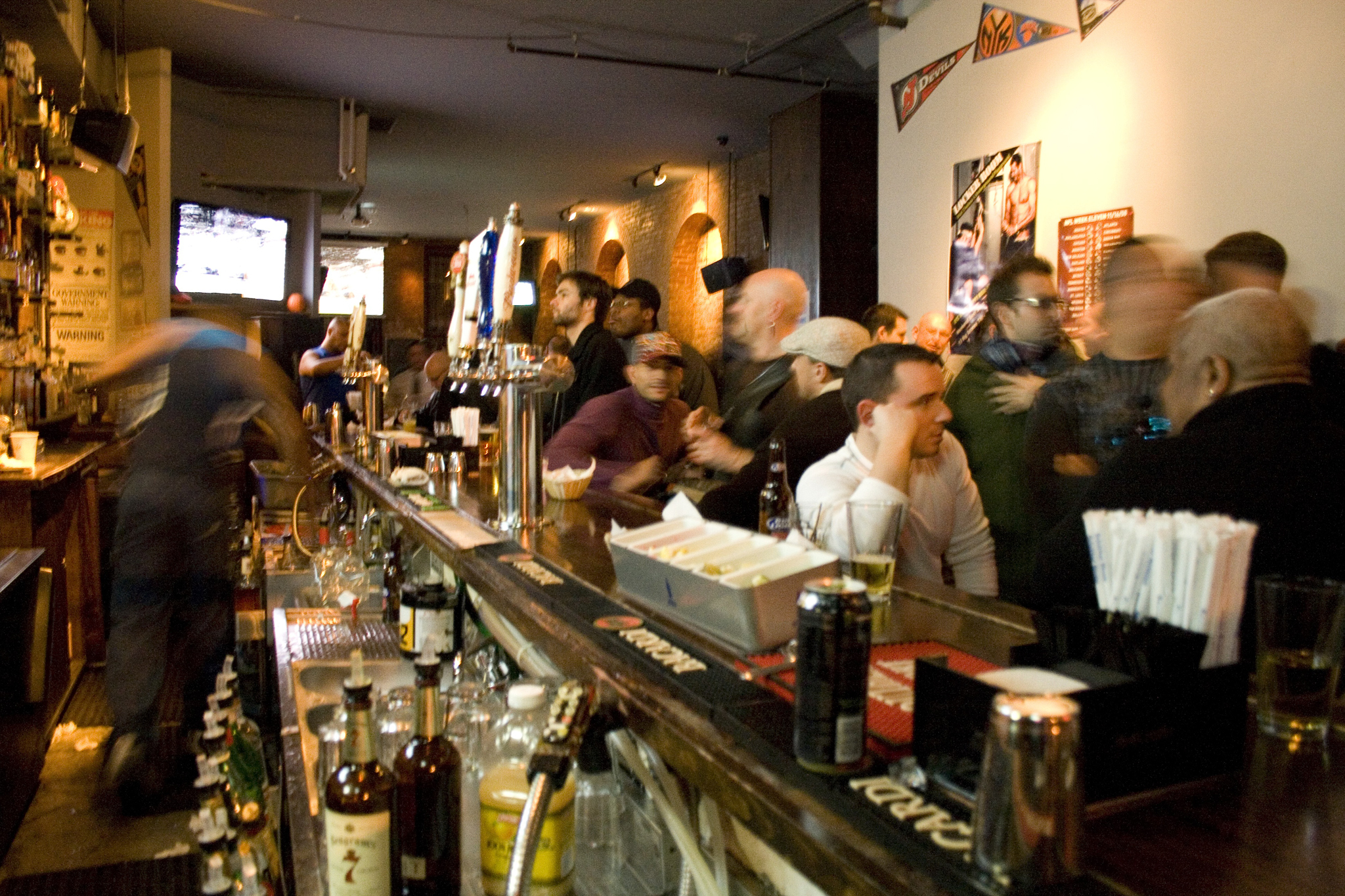 At least three additional gay bars in New York City have declared they will require proof of vaccination status before allowing entry into their establishments.

Last week, Outspoken exclusively reported that The Eagle, a gay leather fetish bar in Manhattan, is requiring customers to be fully vaccinated against Covid-19 upon entry into the kinky club. Now, Atlas Social Club, Gym Sportsbar, and Industry, all located on Manhattan’s west side, are following suit.

Atlas Social Club made the announcement via Instagram over the weekend. The bar explained their rationale for the new requirement by writing, “We decided to adopt this new door policy not as a way to discriminate against anyone, but as a way to encourage our community to get vaccinated.”

Amusingly, Atlas Social Club also features a sign taped to the window of the establishment from an organization called the Hell’s Kitchen Democrats that reads, “All genders, religions, ethnicities, sexual orientations, human beings are safe here.” That invitation, however, now appears only to apply to human beings who got the jab.

Gym Sportsbar, on Eighth Avenue in Chelsea, also made an announcement recently. “All guests are required to provide valid proof of being fully vaccinated or a negative Covid-19 test within 3 days with an official state or government ID to enter Gym Sportsbar,” the establishment wrote on Instagram.

Industry, a popular club in the Hell’s Kitchen neighborhood near Times Square, also let customers know they wouldn’t be welcome without showing confidential medical records. “In order to allow our friends and guests to socialize and celebrate without restrictions Industry Bar will require proof of vaccination,” the bar wrote on an Instagram post.

Requiring proof of vaccination is a highly controversial issue. The irony of gay bars leading the charge into a sort of medical tyranny, as some see it, and using health as a reason to shun certain individuals isn’t lost on many gay men and transwomen who lived though the AIDS epidemic. At that time the community was not only gripped by death but ostracized by rampant fear-mongering and misinformation about the virus. HIV activists still make status-shaming a top priority in political messaging.

Recent data shows that new HIV infections have remained steady in New York City, while other STIs have exploded in recent years. None of the establishments yet have declared whether STI tests or proof of taking PrEP will be required to fraternize.

HIPPA privacy rules dictate that vaccination status is the private business of a patient, and only certain entities have the ability to ask for such information, of which bars and restaurants are not included.

Title II of the Civil Rights Act also states, “All persons shall be entitled to the full and equal enjoyment of the goods, services, facilities, privileges, advantages, and accommodations of any place of public accommodation, as defined in this section, without discrimination on the ground of race, color, religion, or national origin.” The law goes on to define the types of businesses this pertains to with bars, restaurants, and hotels prominently included. Civil liberties activists point out that is is possible, as many people have already done so, to claim that vaccination is in conflict with one’s religious beliefs.

In the case that a person feels his or her religious beliefs are being violated by requiring a vaccine before service, the establishment must try to provide “reasonable accommodations,” according to federal law. Proof of a recent negative Covid-19 test in order to gain entry to their establishment appears to be in accordance with Title II of the Civil Rights Act but potentially in violation of HIPPA, civil liberties activists say. Businesses that do not offer an alternative option for entry such as a negative test may be in violation of both Title II and HIPPA.

WHAM, a local news outlet from Rochester, New York, reported that on May 19 capacity limits in restaurants and bars in the state were lifted. However, the six-foot social distance rule remained in effect. The New York State Restaurant Association claims that the state is considering removing the social distance rule for businesses that require proof of vaccination before allowing patrons to enter. This would allow restaurants and bars to serve many more people, especially if their space is small. Because of this, many businesses in the state are contemplating requiring proof of vaccination status.

Attorney Michael Robinson told WHAM there is legal precedent for requiring vaccinations. “The U.S. Supreme Court upheld a Massachusetts law that required citizens to be vaccinated against smallpox or be fined. The Court ruled that a person’s individual liberties under the Constitution are not absolute, and that in this case, the mandatory vaccination law was necessary to promote public health and safety. So, it’s certainly foreseeable that the same type of rationale might be used in this sort of a case,” Robinson said.

That case is Jacobson v. Massachusetts, which the U.S. Supreme Court heard and ruled on in 1905. The decision stated that the state of Massachusetts could make it compulsory to be vaccinated for smallpox as a matter of public health. This would set legal precedence to allow the state of New York to make Covid-19 vaccination mandatory. It does not set legal precedence to allow a private business to refuse service to a non-vaccinated customer.