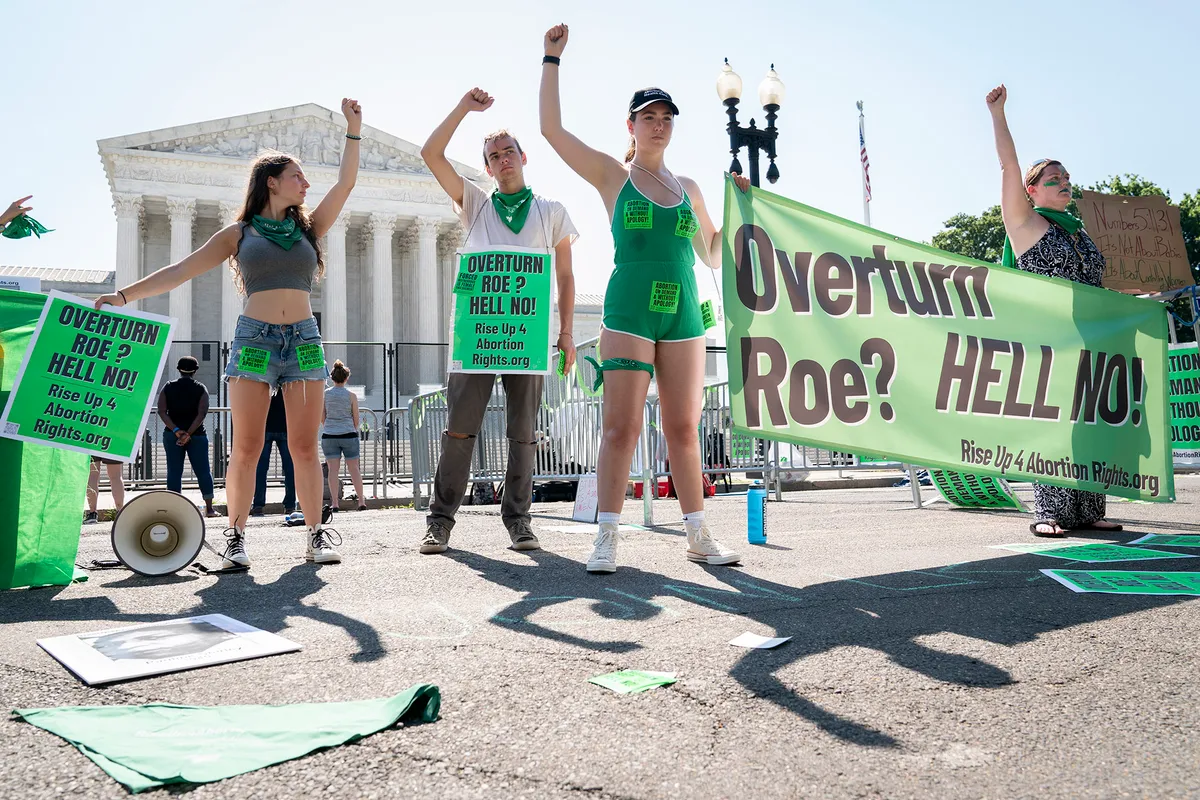 Pro-abortion demonstrators gather outside the Supreme Court on June 15, 2022 // The New York Post

Gays are being gaslit.

Whether it’s by politicians, celebrities, or activists-posing-as-journalists, scores of people are queuing up to induce panic across the U.S.

The alarm call they’re sounding? That the recent Supreme Court decision to overturn Roe v. Wade is the ominous start of a broader plan to strip minority groups of their hard-fought freedoms.

Specifically, they predict the panel will now turn their attention to the 2015 decision legalizing same-sex marriage (Obergefell v. Hodges), plus the 1965 decision declaring that married couples have a right to use contraception.

Speaking from the White House shortly after the Supreme Court’s decision was released, President Joe Biden led the hysteria with an official statement.

“Roe recognized the fundamental right to privacy that has served as a basis for so many more rights that we’ve come to take for granted, that are ingrained in the fabric of this country,” he said. “The right to make the best decisions for your health. The right to use birth control. A married couple in the privacy of their bedroom, for God’s sake. The right to marry the person you love. This [ruling] is an extreme and dangerous path [towards inequality].”

Meanwhile, Rep. Maxine Waters — who practically called for an insurrection outside the Supreme Court building in Washington, D.C. — tweeted: “This is only the beginning of an extreme Republican agenda to take away our personal freedoms, from abortion to contraception, to marriage equality to personal safety.”

Of course, this message spread to the gay masses like a contagion. Before long, it appeared all over social media in various news guises.

Then, YouTube’s Carlos Maza (the champagne socialist with multi-million dollar parents) urged for the Supreme Court building to be bombed with molotov cocktails (yes, really). In a separate thread of tweets, he then justified his behavior, saying: “Violence is a legitimate and appropriate response to oppression. The suffragettes planted bombs. Queer people threw bricks. Violence has always been a necessary and important part of social justice.”

Another person who found himself rattled is Robert Vitelli, of the LGBT Network. “It’s a sign that folks are coming for us,” he told News12 Westchester. “We’re ready to fight back and win.”

Except, from what I can tell, there’s nothing to fight for.

See, while Justice Clarence Thomas did suggest the Supreme Court should reconsider its rulings on access to contraception, gay marriage, and same-sex relationships, he’s a complete outlier and probably the most conservative of all the judges. None of his peers share his view and, to prove it, some have explicitly opposed it.

For example, Justice Brett Kavanaugh wrote of the ruling: “I emphasize what the Court today states: Overruling Roe vs. Wade does not mean the overruling of [other] precedents, and does not threaten or cast doubt on them.”

Reiterating this stance, Justice Samuel Alito, who wrote the court’s majority opinion, insisted the justices’ decision to abandon Roe v. Wade poses no threat to the other rulings.

“Our decision concerns the constitutional right to abortion and no other right,” Alito wrote. “Nothing in this opinion should be understood to cast doubt on precedents that do not concern abortion.”

And that’s they key point that most people seem to be missing: abortion is profoundly unique in that it’s the only issue that involves ending another human life. For this reason, and this reason alone, it stands apart from all the other equality issues.

Ergo, it’s totally cringe for liberal gays to pretend they’re as vulnerable as fetuses in the womb. Trust me, judging by the rabid protesting and calls for mass unrest, they aren’t.

Besides, the Supreme Court isn’t even hearing any cases that could threaten same-sex marriage, so the reaction is completely excessive.

Furthermore, the current Supreme Court line-up appears to be quite friendly to same-sex equality. Back in 2020, the Court ruled 6-3 that gay and transgender individuals are protected from discrimination by the 1964 Civil Rights Act, which they didn’t have to do. The justices could have easily held that a statute that prohibits discrimination based on sex does not include protection based on LGBTQ status, but they didn’t.

Even if it did overturn gay mariage, it would simply return the issue to a state level, where local lawmakers would rule on it after lengthy consultations with local communities. This means ordinary people (as opposed to a few select judges) would get direct influence over the law, giving them that all-important ‘seat at the table’ they’ve been demanding.

Maybe that’s what scares them – the prospect of having to debate something properly, rather than shouting at clouds for maximum attention.