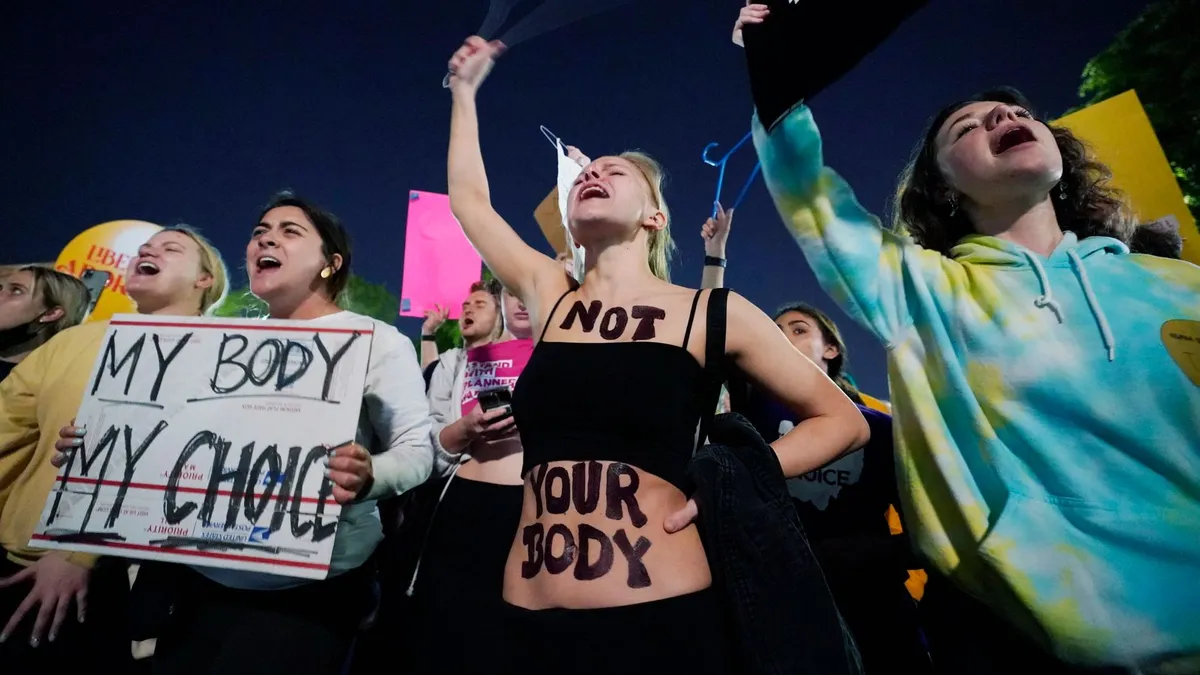 Pro-abortion protestors outside the U.S. Supreme Court in May 2022 // Sky News

A leaked opinion from the Supreme Court suggests the paramount case on abortion, 1973’s Roe v. Wade, is likely to be overturned. The bombshell appears to have not come at a better time, energizing the Democratic base just ahead of the midterm elections as the Biden Administration faces multiple crises–from the war in Ukraine, legal setbacks on Covid-19 policies, record inflation, and abysmal approval ratings.

On Monday, a draft of a legal opinion penned by Justice Samuel Alito was leaked to Politico by an unknown source. The document, titled “Opinion of the Court” for the case Dobbs v. Jackson Women’s Health Organization, stated that Alito was in favor of overturning two previous court decisions involving abortion. “We hold that Roe and Casey must be overruled,” Justice Alito writes. The opinion continues, “It is time to heed the Constitution and return the issue of abortion to the people’s elected representatives.” To be clear, while the leaking of this opinion draft points to a possible, if not likely, overturning of these two cases the real decision is not official until all final opinion drafts are released. If Roe and Casey were to be overturned, the issue of abortion would be left in the hands of state legislatures to decide, as the Constitution dictates.

Such facts and logic play no role in the world of fear-mongering progressives and their media machine. Emotional fires have been stoked, even before a final decision on the issue of abortion is issued, with LGBT activists screaming the loudest that this is one step in the direction of overturning Obergefell v. Hodges, the Supreme Court case that codified gay marriage as a settled legal precedent.

Sarah Warbelow, Legal Director for the Human Rights Campaign, issued a short statement on Monday where she wasted no time bringing up the unfounded hypothetical of rolling back gay marriage rights.

“Many are wondering what this decision means for more recent victories won in the courts for LGBTQ+ people. I understand that feeling. I feel it too. If Roe is overturned, there is no immediate impact on any other case decided by the Supreme Court including Lawrence and Obergefell. But it encourages state lawmakers pandering to the base to test the limits of court recognized LGBTQ+ equality,” she wrote.

She went on to use incendiary language that, if uttered by a Republican, would have been labeled as “incitement of an insurrection.”

“What we need now is outrage, anger, and action for those among our community who are about to see the most destructive attack on our civil rights in a generation. We will fight back,” Warbelow writes.

Yet, had either of these women bothered to read the opinion that was leaked, they would have seen Justice Alito very plainly lay out that abortion is a standalone issue. The Court’s decision to overturn Roe v. Wade is in no way indicative of his stance on other cases that gave rights like gay marriage. “[A]bortion is ‘inherently different from marital intimacy’, ‘marriage’, or ‘procreation’. And to ensure that our decision is not misunderstood or mischaracterized, we emphasize that our decision concerns the constitutional right to abortion and no other right. Nothing in this opinion should be understood to cast doubt on precedents that do not concern abortion,” Alito writes, specifically mentioning both Obergefell and Lawrence.

There is good reason for Justice Alito to make this point in his writing of the Court’s opinion. The legal principle of stare decisis dictates that courts should follow precedent in cases that are factually and logistically similar. In plainly stating that the justices view cases involving marital rights as inherently different from cases dealing with abortion shows that stare decisis does not apply here, and the anxieties driven by LGBT activists are completely unfounded and not based in reality.

Furthermore, Justice Amy Coney Barrett has referred to “superprecedents” in the past. This is the idea that some cases have set so much of a foundation in our society that overturning them would be an overall negative in the long run. Since Obergefell granted the right of same-sex couples to marry, there have been seven years of marriages performed, plus untold numbers of adoptions or births of children to same-sex couples. Voiding those legal marriages overnight and putting into question the custody status of countless children would send the U.S. into utter turmoil and chaos. It’s not just children; consider property rights and everything else that enjoins two people in a marriage. The hardships created by such a move would be untold. This is a reality that the court would have to consider if the question were ever brought to the justices. To say that overturning Obergefell would have a net negative to the stability of American society would be a vast understatement.

The leak appears to be motivated purely for political capital. It stokes fear and divides the nation further in hopes that abortion becomes the main talking point of midterm elections this fall. It may have also been leaked to intimidate the Court, attempting to get one of the justices to change his or her position on the issue thus reversing a theorized 5-4 split to a 4-5 split. That pressure would come in the form of civil unrest, which has already started and is being encouraged by powerful voices on the Left.

These calls for violence and riots are just another example of trying to inject the court of public opinion into our actual judicial system. That is a dangerous precedent and a tactic the Left must not get away with.

Even Democrats like Sen. Elizabeth Warren and Vice President Kamala Harris have shared their outrage by calling pro-life Americans “extremists.” Notably, everyone on the Left suddenly knows what a woman is again–without any of them getting degrees in biology first. Overnight, everything is about women’s rights; there’s no mention of “birthing persons,” “uterus-havers,” or “people who menstruate.” As rabid champions of gender ideology and trans issues, one would think HRC and GLAAD would have a problem with this type of “transphobic” rhetoric. Instead they are pushing the lie that gay marriage is next on the proverbial chopping block while also working to rally women to the polls in November. This further shows these organizations’ true loyalty, not to LGBTs but to the Democrat party.