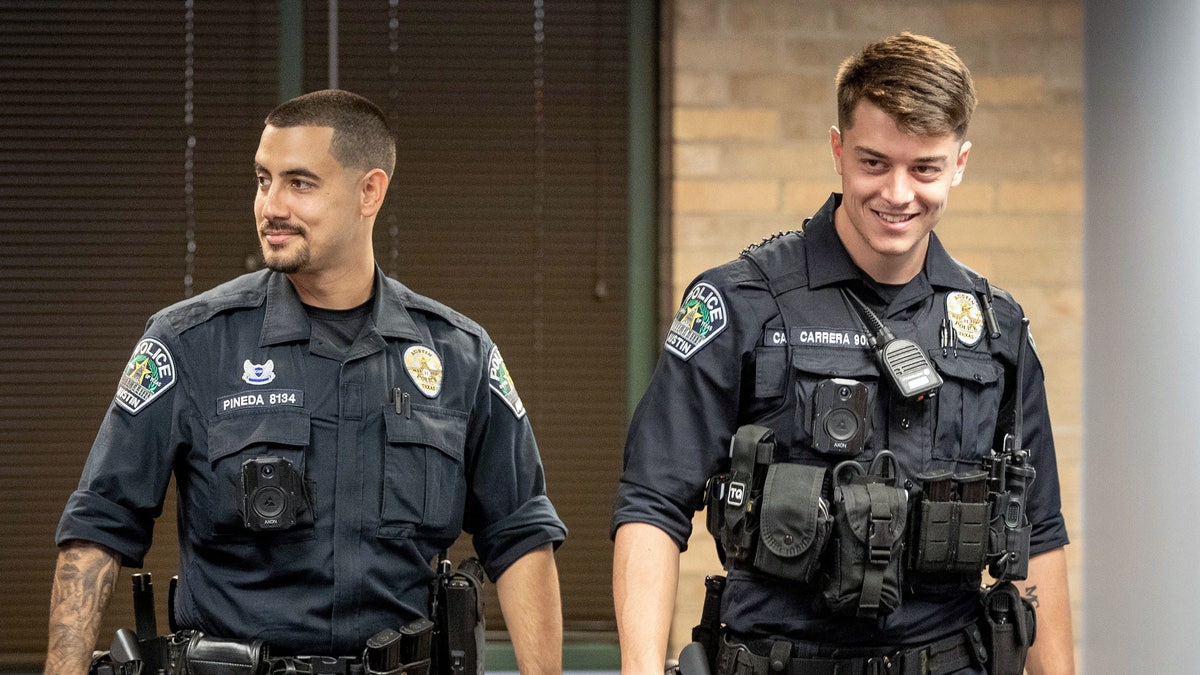 Two Texas police officers gained a flurry of attention over the weekend after saving a man’s life, but the spotlight involved more than just their act of heroism.

An Austin, Texas citizen reportedly fell into a seizure after parking his car. With his foot wedged onto the accelerator, the spinning wheels of his truck then ignited a fire that engulfed his automobile. Officers Eddie Pineda and Chandler Carrera of the Austin Police Department acted quickly to pull the unnamed man from the car, saving his life.

Both Fox News and the New York Post reported on the attention that the two officers garnered in regards not only to their deeds, but also their stunning good looks. It all started with an Instagram post by the Austin American Statesman, a local news outlet, writing: “Austin police officers Chandler Carrera and Eddie Pineda pulled a driver from a burning pickup truck just before it exploded at an apartment complex Monday. According to fire officials, Pineda smashed a window to open the truck’s door and he and Carrera dragged the man out before the flames swallowed the vehicle.”

An outpouring of responses followed.

“Which was hotter, these cops or the fire?” wrote user @trinitystennfeld.

“They look like actors cast in the role of police officers,” added another user by the handle @paulavmphotography.

Even Twitter got into the mix with one person claiming he would wait for the officers to travel from Austin to Oregon just so he could be saved by the ravishing pair of boys in blue.

The two officers were interviewed on CNN and asked, “Officer Pineda, does your training kick in at some point when you’re doing this, or is this adrenaline? Walk us through how that goes.”

Officer Pineda responded, “It’s actually pure training at that point…I felt the adrenaline after everything was done, but during the actual moment, it was just the training that kicked in. You just react.”

More crotchety users decided to bring race into the picture, insinuating that the only reason the officers responded promptly and courageously was because the victim was white. One Twitter user even went as far as to say that the police would have made the situation more dire if the victim had been black.

“Damn if that was someone with melanin in their skin [the men] woulda thrown gas in that fire,” one sour user wrote.

Fortunately, most people responded with thanks and praise for the courageous acts of the officers.

“What a beautiful and wonderful life saving service by putting their lives in danger!? Dear officers, God bless you! You deserve more than a saying. Thank you so much!” wrote one person.

Others responded by invoking the lunacy of “defunding” the police.

“So, maybe not defund the police?” another user suggested.

Another person refuted the infamous acronym ACAB (All Cops Are Bastards) by stating: “A great example of the good hearted police officers out there. Not ACAB. 95% of police officers would do this without thinking. Their purpose is to protect and serve, and they do that.”

According to the Texas Tribune, last year the Austin City Council unanimously voted to cut $150 million from the city’s police budget. Republican Governor Greg Abbot said this decision “puts the brave men and women of the Austin Police Department and their families at greater risk.”

New cadet classes were just one item on the list of potential cuts due the smaller budget. Officer Carrera stated that he is a fairly recent graduate from the police academy, raising questions as to whether he would have been able to save this victim’s life if those budget cuts had been in place two years ago.