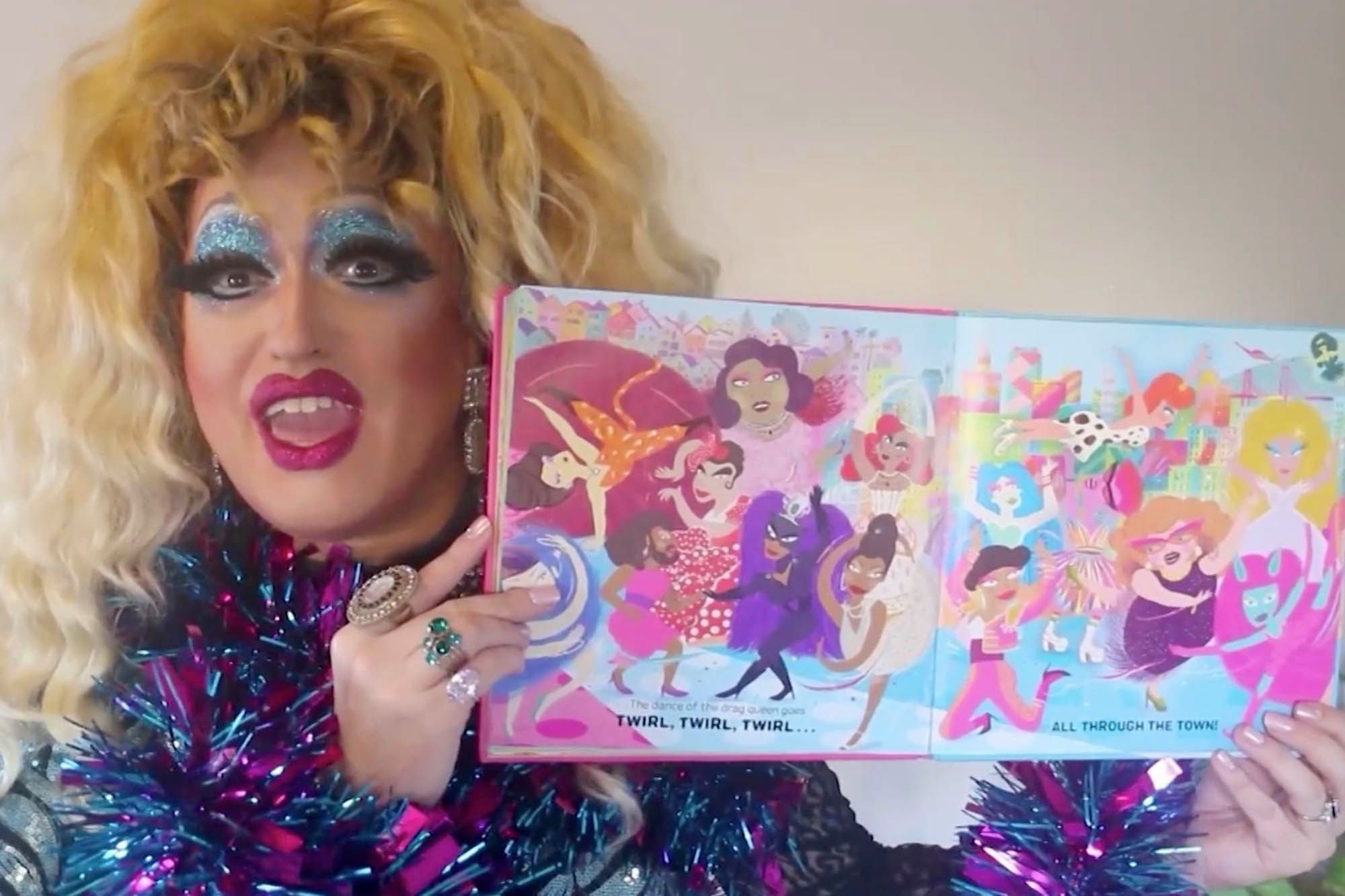 Mary Margaret Olohan, a writer and reporter for the Daily Caller, tweeted about the PBS broadcast, claiming the episode was produced in partnership with WNET, a New York public media company, and the New York City Department of Education.

According to the show’s website, Let’s Learn “helps children ages 3-8 with at-home learning.” The show provides educational videos with optional Spanish subtitles on topics like phonics, reading, and writing. The drag queen segment appears to be the first time the show deviated from its regular programming.

“I think we might have some drag queens in training on our hands,” Lil Miss Hot Mess says to the tots at home in the broadcast.

The book features nine “fabulous queens,” some with names like “Jaclyn Jill,” “Ella Menopipi,” and “Cinderfella,” who wears long blue hair with a mustache.

“The program strives to incorporate themes that explore diversity and promote inclusivity, which are relevant to education and society. Drag is a performance art that can inspire creative thinking and the questioning of stereotypes. Lil Miss Hot Mess is the author of the book, The Hips on the Drag Queen Go Swish, Swish, Swish. She serves on the global leadership team of Drag Queen Story Hour and has hosted readings at numerous libraries, children’s museums and schools across the country,” Horvitz continued.

According to the Daily Caller, Horvitz claimed the drag queen episode first aired on March 31 and WNET has received “only a small handful of messages” in the form of complaints. She also repeatedly told the Daily Caller that Let’s Learn is not a PBS show, but rather it is simply aired on the government broadcasting channel.

New York’s Department of Education defended funding the gender-bending children’s spectacle. “Drag is a celebration of self-expression and creativity,” DOE spokesperson Sarah Casanovas said, calling the storytelling session “a fun optional resource … to support learning from home,” according to the New York Post.

Drag queens reading and performing in front of children is a common, and highly controversial, development that arose in the 2010s. As drag queens–adult nightlife performers who historically performed in gay bars–have flooded into public libraries and schools, a handful have been discovered to be registered sex offenders.

In a story from 2019, KHOU, a news outlet out of Houston, Texas, reported that the Houston Public Library admitted to allowing a registered child sex offender to read to a group of children during a drag queen story session. Alberto Garza, a 32-year-old man and drag queen, was convicted of assaulting an eight-year-old boy in 2008. The library admitted they did not perform a background check on Garza prior to his appearance.

“In our review of our process and of this participant, we discovered that we failed to complete a background check as required by our own guidelines. We deeply regret this oversight and the concern this may cause our customers. We realize this is a serious matter,” a statement from the Houston Public Library read.

Libraries in Wichita, Kan., also participated in Drag Queen Story Hour, but the library board could not decide whether to enforce background checks before allowing the drag queens to perform. The Wichita Eagle reported, “Board members were split between those who said registered sex offenders should be automatically disqualified from ever giving a talk at the library, and those who said it should be allowable in some circumstances.”

Blaire White, a well-known transgender YouTube personality, has posted several videos about drag queen children and drag queens interacting with children. Drag is not appropriate for children and performances should be kept to a particular time and place, she says.

“These people are literally putting wokeness before the safety of children. And I am not trying to imply that all or even most drag queens are predators…But what I am saying, which is something that LGBT advocates don’t seem to ever get through their head, is that sometimes you guys are so lax and so interested in being woke, that you leave the door open for this. Stop.”